Race-Baiting Insider Ernest W. Adams Is Everything Wrong With Industry

Since IGDA is a corrupt organization, and has taken several shots at me in the past, including stealing my article and making it available for download to the masses, I don’t hold a lot of love for them. The other reason I don’t like them, however, is their scumbag founder, and guiding influence, Ernest W. Adams. Of course, they will tell you this child molester looking motherfucker has nothing to do with their current operations, but we’ll get to that dubious claim later. Mr. Adams isn’t just the founder of IGDA, by the way. His influence goes deeper than that. I’ll let some anonymous researchers explain it to you more:

“Ernest W. Adams was a director of the CGDC or Computer Games Developers Conference. The CGDC was sold to Miller Freeman Inc. in 1995. They later reorganized as CMP Media, which would grow up to found and own Gamasutra in 1997. In 1999 they were bought, with Gamasutra, by United News & Media (which would be renamed to UBM). While serving as a director at the CGDC, Adams later went on to found the IGDA with support from the CGDC. The CGDC would later go on to be the GDC. Thus UBM Tech, the organization that is behind Gamasutra, the GDC, and the IGF, is also financially tied, through its purchase of CMP Media, to the very origins of the IGDA.”

So, this isn’t just some jabroni I’m picking on, even though he looks like one. He’s connected as fuck, and still has the ear of the current head of IGDA, Kate Edwards. I have every reason to believe it was his idea to include Randi Harper’s blocklist in that IGDA list of resources for dev harassment (although Edwards is a scumbag as well, which you can see if you follow that link). And just what kind of man is Mr. Adams? Well, he’s the kind of guy who compares GamerGate to the segregationists, and even to the Klan explicitly:

So, now I’m a member of the Klan, simply because I don’t agree with hypocritical fucks like him, who made his wealth leaching off the industry, and creating a shit-rag like Gamasutra? No, to hell with that. You’re the disgrace, not GamerGate. Also, you look like a fucking fool. Who dresses you?

So, we’ve established that he’s repugnant. You can also check the archives, as we’ve written about this nasty piece of work before. Now, let’s look at who loves the ideas flowing from his sick mind. Why, look at that! It’s IGDA chief Kate Edwards (among many other insiders). Who would have thought?! 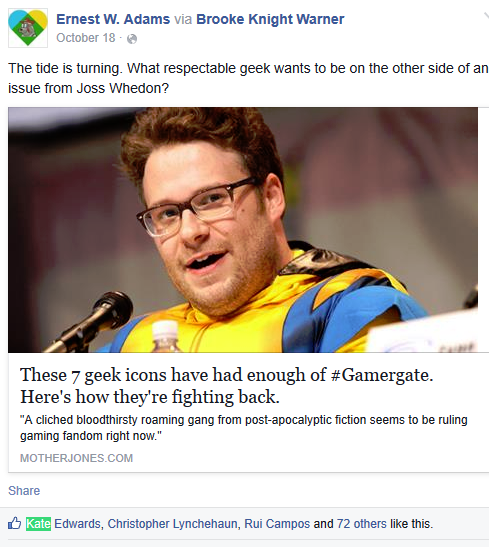 There’s so many, that I could fill up a whole article with just that. I know Facebook likes aren’t everything, but they speak pretty loudly, especially when she’s liking shit like this: 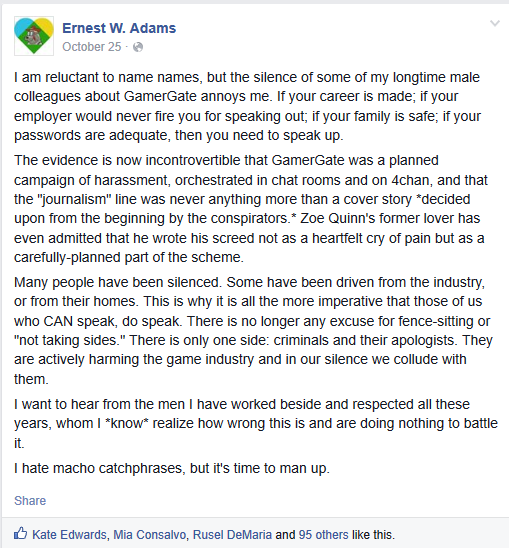 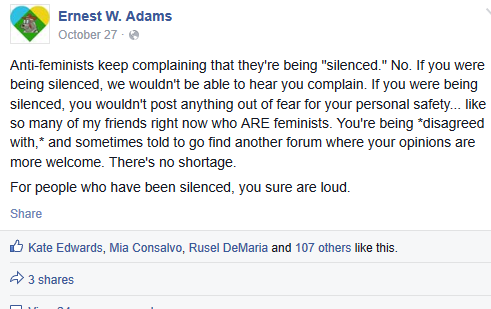 Go to another forum, as in, get off Facebook, Twitter, or anywhere else where you could gain a real following, or have your ideas read by the masses. YouTube? Ban ’em. NeoGAF? I don’t think so. Kotaku? Off to the “greys” you go (or banned). IGDA shills blacklists to their members, then acts surprised when there’s a backlash. Even if the list shilling wasn’t Ernest W. Adams’ idea, we know Kate takes her cues from that park ranger looking piece of shit.  The good news is, if you believe people like Christian Allen from last night’s interview, their ideology is killing the organization:

NG: The recent blacklist that the International Game Developers Association curiously supported got a lot of concern and backlash. How do you feel about their support of it?

Allen: I have to admit I have not been part of the IDGA for the last few years. So I can’t comment, except to say that I think the IGDA has become increasingly irrelevant among game devs. It’s a group for students and academia, in my honest opinion. I don’t really know what they do now.

We’re gonna have more on these assholes in the weeks to come, except we’re not just gonna be talking about IGDA. The IGF, Indiecade, and the GDC, will be explored as well. Who gets paid what? Where is the money going? The key players’ rhetoric and actions will be refuted and exposed. We’ve only just scraped the tip of the iceberg on these clowns. Settle in for the long haul, because there’s much more to come.