Randi Harper Flat Out Lies About Neutral Critic, Claims She Has Ties to Roosh V

I’ve been slacking off on the posts this week, simply because I’ve bene a little demotivated. I was also sick one day, but I’m not here to talk about that. What I am here to talk about, is Randi Harper’s disgusting libel against a neutral friend of mine named Stephanie. Steph has been nothing but professional throughout her entire investigation into Randi. But Ms. Harper continues to throw out lie after lie.

Today, she decided to claim that Stephanie was somehow involved with Roosh V?  Full disclosure, I had a story here sponsored by Roosh V. But Stephanie has nothing to do with him, and never has. Randi is resorting to the lowest kinds of of misinformation here. How can this person be expected to stop online harassment, when frequently, she’s the main one leading it? 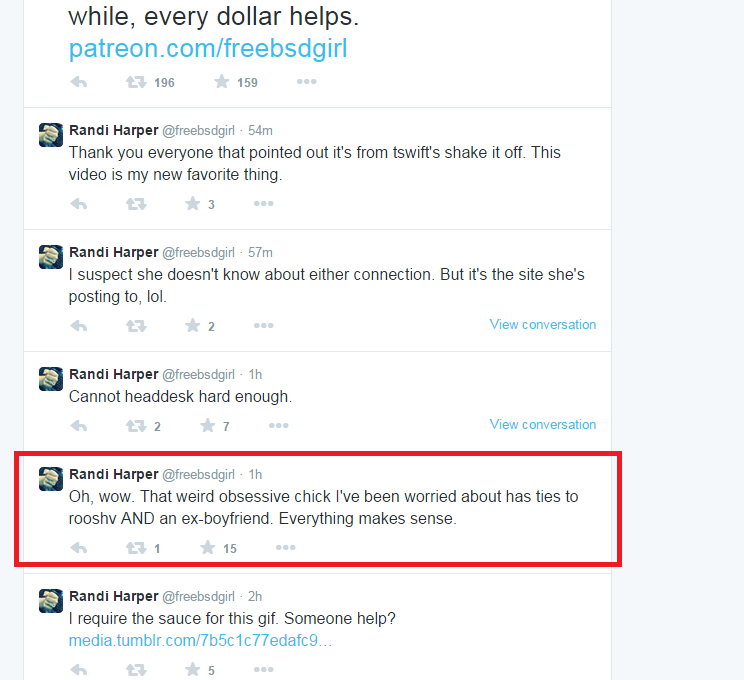 And she claims Stephanie was somehow involved with one of Randi’s ex-boyfriends? I’ve seen both Stephanie and Randi, so I have a hard time believing that. But, nonetheless, it’s just more lies…which would explain why she deleted the tweets.

Then, today, she bragged about her connections getting notorious thug Leigh Alexander restored so quickly to Twitter after her suspension:

How can Twitter work so closely with a liar and harasser like Randi Harper? It boggles my mind. I can’t think of an anti with more dirt on them than her. Even Zoe Quinn looks like a near angel compared to this fucking nut. Don’t forget, she also spread the lie about me paying for a swatting! She will sink to any level imaginable in order to achieve her goals, including libel. She just proved it again today.