OAPI’s Randi Harper On Leaking Her Own Address: “This is all intentional. Don’t worry. :)”

Yesterday was a big day for Randi Harper. Along with Zoe Quinn, Alex Lifschitz, and Sheri Rubin, she announced her new Online Abuse Prevention Initiative. If you read my article from yesterday, you know I don’t think very highly of all that. But that isn’t what we’re talking about today. Instead, I have a little story to tell you about this “activist,” that will perhaps put her efforts in a new light.

First, I want to remind you that this is a women who spread a completely false allegation about me (that I paid for a swatting) concocted by a well-known troll. Randi did this without a second thought. She used it to further her own agenda, facts be damned. This is a pattern for Ms. Harper, if you know her history.

So when someone messaged me yesterday, suggesting she was trying to setup her own doxing, or set up a scenario where she could fake some harassment,I figured they were probably right. What I didn’t figure, is that Randi Harper would be dumb enough to admit to in on the record. Luckily for us, I was wrong. 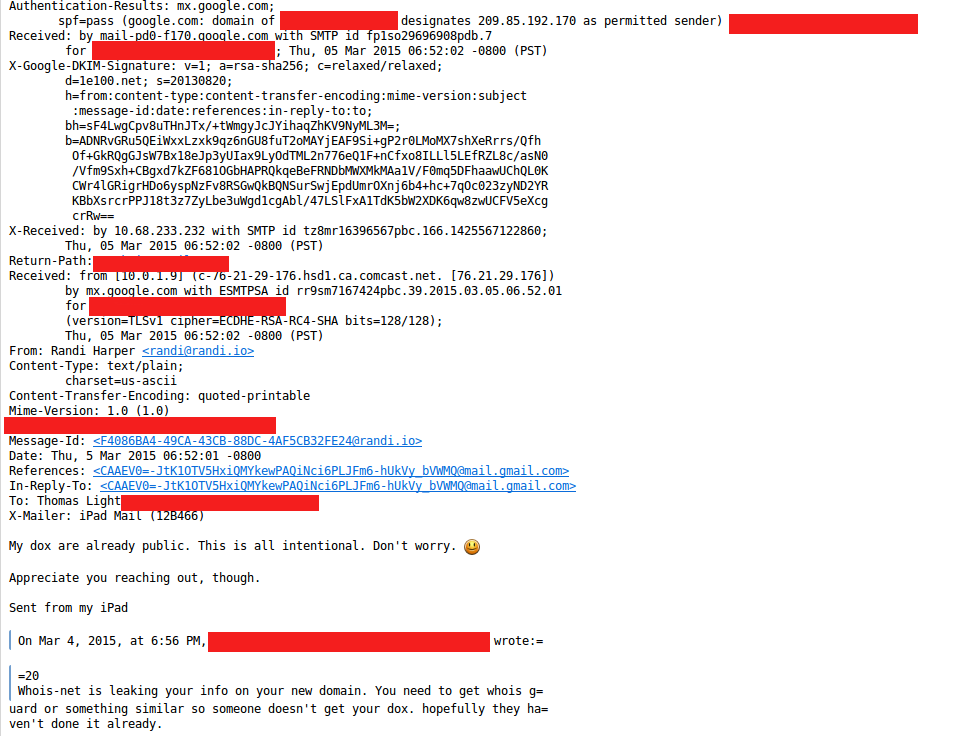 This is all intentional. Don’t worry. 🙂 – Randi Harper

As you can see, this whole thing seems to be a rather shoddy ploy to generate harassment. She figures that if she puts her info out on the street like this (which every real security expert tells you not to do) she can get someone to start spreading her address around. Then, she can run to Twitter and claim she was doxed, or make up some shit about people mailing her something gruesome. The scenarios are endless, but that all end with Randi, Zoe, and the gang making more money off their “harassment.”

Ms. Harper is a ruthless radical who has never been concerned with the real truth, only propaganda. This looks like yet another act for the press. It’s just too bad for her that she was caught red-handed by an enterprising member of the GamerGate community. All the thanks should go to them for exposing the hypocrite once and for all. Spread this shit far and wide, screenshot it, I don’t care. But people need to know how crooked Randi Harper really is. How can anyone still trust her after this?