I’ve been researching a couple cool stories all night, but a breaking news item has come up, as it usually does. Yesterday, a neutral writer took a look at Randi Harper’s pattern of abuse. If you’ve read this site for any decent length of time, then you’re already pretty familiar with it. The fact of the matter is, Harper is a notorious bully who has a documented history of harassment. She can sit back and threaten to sue all she wants, as she alluded to last night, but we know the deal here. She’s a phony (just read our story from the other day if you haven’t already, and see). Phonies don’t scare GamerGate, and they don’t scare people with conviction in their beliefs…like Stephanie (@Sushilulutwitch) the author of a few pieces that has Big Randi up in arms.

In case you missed her tweets from last night, here they are. It seems like most did overlook them: 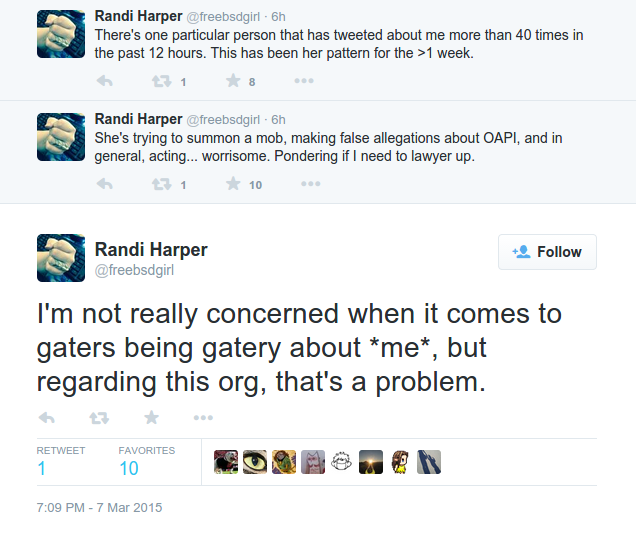 She’s “pondering if [she] needs to lawyer up. This is a VERY thinly veiled threat to silence Stephanie and/or me. I’m not sure what she plans on suing over, since everything we’ve reported is factual. But she knows that we’re upstart writers with no real organization behind us. Personally, a lawsuit would fuck with me, but I don’t care. I would never let a consideration like that color my coverage…and I doubt Steph will either.

But this is a symptom of SJWs everywhere. They constantly try to bully and silence the opposition by any means possible. They aren’t interested in a free press. In fact, they hate the unrestricted freedom of speech, simply because they can’t win with it in place. That’s what the extreme PC culture is all about. Shaming people, ruining careers, fucking up lives permanently…that’s the name of the game. The idea is to hurt you so bad that you wouldn’t dare to speak up against the radical feminist agenda ever again. The sad part is, this frequently works.

I’m sure Randi could sue us, even with no real case. The one reason I think she might not, is because we would then have the opportunity to put her under deposition. That would open the door to all sorts of inquiries…under oath. You can see why this might cause some consternation for Ms. Harper. Even so, I won’t put anything past her and the goon squad she directs on Twitter. Given their history, there’s no telling what dirty trick they might think of next.

PS: This is the woman who is going to stop online harassment lol. It’s like putting the fox in charge of stamping out crimes against hens…