Reader Speaks Out on Unethical GameSpot & How They Mistreat Longtime Patrons

Guest Editorial by The Andredal

I will start this of by telling you some background information about how I got banned for criticizing GameSpot. I was a member of those forums for 11 years until just a few weeks ago. The community manager has been the force behind getting me banned me off the site. I was part of the site during major changes and kept going back, because the community was great.

What made me doubt the site’s integrity was an incident that happened in 2007. If you’re wondering why this might seem familiar, it’s because that was when Jeff Gerstmann was fired for reviewing Kane & Lynch. He gave it a 6.5, and because the publisher had so much advertisement on the site, they decided he had to go.

What started this was discussion on GamerGate related topics. I had before this instance not encountered any censorship on the forum, at least not what they didn’t include in the TOS or board rules. They didn’t even list a reason as to why I was banned. All they did was to link to one of my videos and said this: 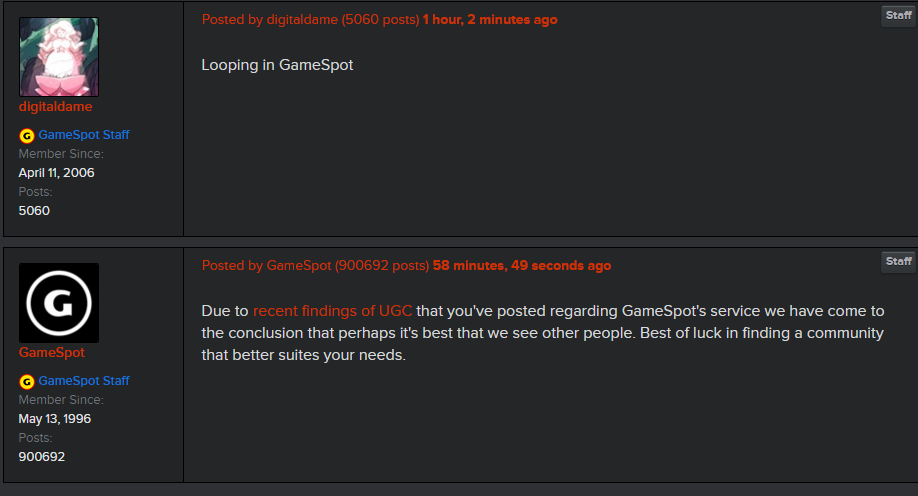 This was the video they linked to:

I had all the evidence for what I was talking about, and i wasn’t even on their site criticizing them. The community manager deemed it fit to keep mods that were abusing their power, but not me.  I wrote a piece showing them censoring topics on GamerGate. I have pm’s (private messages) and proof of them doing this. I had to fight hard just to get up one thread on GamerGate, even though it was never breaking any sort of rule.

The community manager was more than aware of what was going on in the forum. Then, I put attention on the Metal Gear Solid V write-up, and how their staffers were taken out to a review event. What that means is, you travel to a location and the developer/publisher sets the conditions on how you can play. This may affect the review since you can’t really play the game as you normally would. There was also some question as to whether or not the reviewer actually finished the game. So, I put this complaint up in the feedback section. The responses I got were:

“Oh my fucking God! Why do you give a shit? Its a God Damned video game that costs $60 not a car or something like that. This is GameSpot not the New York Times or Washington Post. …and we’re talking about entertainment.

“You need to get a life if you worry about this kind of stuff so much and from your post history its clear you’re obsessed.”

Then finally a member of the staff didn’t deem this proper feedback and replied with this: “Please keep the GamerGate stuff in the GamerGate thread. This is for bug reporting and actual feedback.”

What I got in the pm’s after he said it was becoming a “pissing contest” and that’s why he locked it. Since that wasn’t “feedback,” I made another one to point out the obvious flaws in their ethics policy. I didn’t just say there was a problem, I just pointed it out to them both in pm’s and here.

Then, it got deleted. They simply decided to make the problem go away. I pointed out specific faults in their ethics policy, in great detail to not just the community manager, but also Ben Howard, VP Content of GameSpot. They didn’t do anything. They never lifted a finger to change or try to become more transparent. They banned me for pointing out obvious censorship and unethical behavior. My point was further proven right, when it was disclosed that they did go to a review event a week after my request. Not only did they try to silence me, they never admitted they were wrong or apologized. Apparently I was expecting too much from the second largest gaming publication in the world.

Then, suddenly can’t access the forums, and I think: “There must be some kind of glitch,” because it said that I was IP banned. So, I emailed them, and they said I was banned forever and that it was final. After 11 years and over 75 000 posts. It was a big “fuck you” and a “see ya later.” Not only did they IP ban me, they also used my video to find me and ban me on Twitter.

Here is the proof of this:

I am sharing this information in order to spread it to as many people and places as possible. I won’t dictate what others should do. You should form your own opinion about this and decide from the information I’ve given you. I’m just saying that this site silence opinions they don’t like and ethics seems to be an afterthought there. We already know them to be corrupt. You can use your voice to challenge them on this, or go to other sites that are ethical, like Breitbart Tech, or TechRaptor. The choice is up to you.