I promised to do a Reddit article, and it kept getting pushed back due to other stories, live streams, etc. But, it’s Saturday, so I figured an update of the last few days would be a good idea. We’ll start with Pao’s laughable editorial, moving into the new rules announced Thursday, and examine the SJW response to them. Wrapping up, we can talk about some media reports and examine the future outlook for the company.

As I said, I wanted to discuss the Pao editorial first. This woman is unreal. She has been working the PR angle hard as fuck since she left. We saw former Reddit CEO Yishan Wong spreading what turned out to be bullshit about the new rules announced Thursday. He also tried to position Pao as some kind of last hope for the free speech advocates on the site. It was delusional. Pao herself wasn’t much better, writing in the Washington Post:

I have just endured one of the largest trolling attacks in history…. POOR ELLEN 🙁

What happened to me while head of the popular online forum Reddit for the past eight months is important to consider as we confront the ways in which the Internet is evolving. Here’s why:

The Internet started as a bastion for free expression. It encouraged broad engagement and a diversity of ideas. Over time, however, that openness has enabled the harassment of people for their views, experiences, appearances or demographic backgrounds. Balancing free expression with privacy and the protection of participants has always been a challenge for open-content platforms on the Internet. But that balancing act is getting harder. The trolls are winning.

It’s hard to feel to sorry for the woman, I gotta be honest. I’m starting to doubt the story that she wasn’t actually the one who fired Victoria Taylor as well, given that the rest of what Wong has said turned out to be bogus. “The trolls are winning.” No, shitty management is losing. You were controversialized from the start due to your spurious sex discrimination lawsuit and flamboyantly gay husband. Weev speculated the other day that you’re actually fucking Wong and that’s why’s he’s doing your dirty work, but who can say for sure. It does sound about right, though.

Speaking of the new rules that Wong oversold, here’s a rundown:

Therefore, today we’re announcing that we’re considering a set of additional restrictions on what people can say on Reddit—or at least say on our public pages—in the spirit of our mission.

There are other types of content that are specifically classified:

We’ve had the NSFW classification since nearly the beginning, and it’s worked well to separate the pornography from the rest of Reddit. We believe there is value in letting all views exist, even if we find some of them abhorrent, as long as they don’t pollute people’s enjoyment of the site. Separation and opt-in techniques have worked well for keeping adult content out of the common Redditor’s listings, and we think it’ll work for this other type of content as well.

It’s not ideal, but it’s still well short of what Wong was promising. He said they were gonna go in and clean house. That’s not happening. /r/coontown is staying, for example. GamerGate’s bastion KotakuInAction also seems to be good. Many other controversial subreddits are staying as well. That’s a good thing. I’m not co-signing the ideology behind them in the slightest. What I am doing is upholding the free speech absolutism that I believe is integral to a free and open Internet, not to mention society.

As you can imagine, many social justice warriors were less than pleased with this turn of events:

And of course his sockpuppet had to chime in as well: 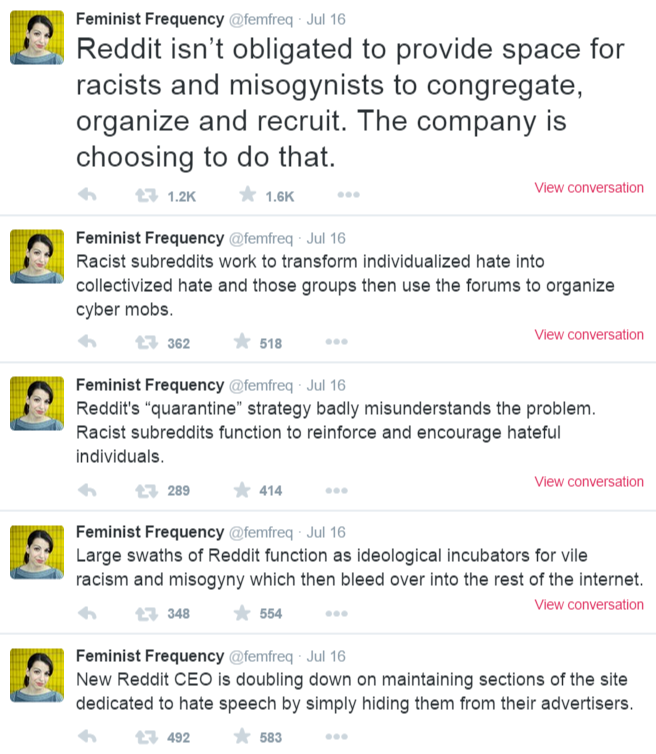 Outlets like the CBC were also pissed that Huffman didn’t go far enough. The New York Times had a more balanced view. All in all, I think Huffman had a pretty good week. Now, we’ll see how these policies are actually put into practice. They seemed to be going over a lot better than folks had been predicting. But as I said, most of that was based off Wong being a liar. We’ll see what happens in the future. I think that if the powers-that-be there at Reddit keep a light touch with enforcement policies, things will be OK. That doesn’t mean we shouldn’t start using other sites like Voat as well. We should also continue to be weary. But I don’t think the end days are here just yet.