Man, someone tell me not to go to sleep like that again. What the hell? I thought I had the biggest story of the day covered, but then Reddit came out and started censoring their site. You’ll notice the theme of the day is censorship. So, what happened over at Reddit? Here’s the rundown for those of you unfamiliar with the recent developments: 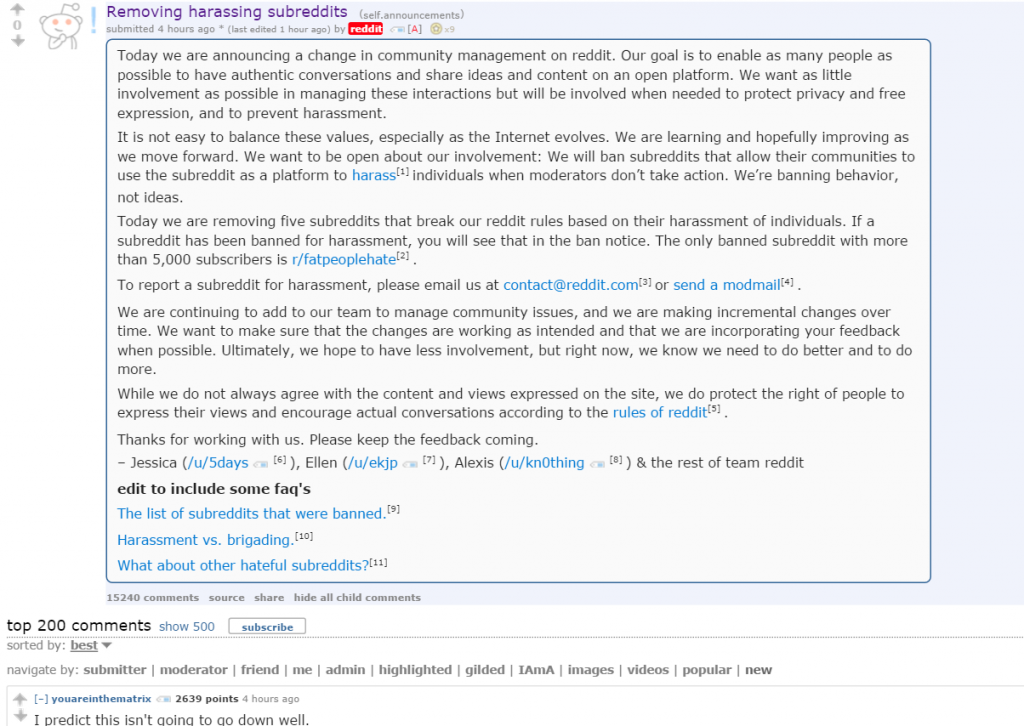 I would predict that as well. Don’t get me wrong, I don’t co-sign every subreddit that exists. I did enjoy NeoFAG, though (among today’s deleted). It was a community dedicated to mocking and exposing the deplorable behavior of NeoGAF as well as its despicable founder, Tyler Malka. It appears the exodus to sites like Voat is going to begin in earnest now. As Big Randi would say, Reddit chose this bed, now it’s time to get fucked in it.

I have my small subreddit that I’ve neglected over the past couple months. KotakuInAction is still going. But for how long? The Verge tried to tie us into the worst groups on Reddit in their new piece. They clearly want us out, and I know they aren’t the only ones:

I’m one who thinks we should fight until the very last minute. Don’t cede any ground. Still, it would be unrealistic to say we shouldn’t start making plans to abandon the site. They want to go in a different direction, and this is likely just the beginning of the censorship. We’ll see what happens in the weeks and months ahead, of course.

On a side note, the Reddit community is asking why the cesspool known as ShitRedditSays is still allowed to continue. Surely if “harassing behavior” is to be punished, they should be the first to go, right?

Here’s more from the Twittersphere:

#EllenPao thinks racism against black people is fine, but making fun of fat people is just to much. #RedditRevolt pic.twitter.com/MDUrT4ccWR

I’ll keep this story updated throughout the night as more comes in. Lemme know what you think about this latest round of censorship down below. Is it time to abandon Reddit altogether? Or are you like me and think that we should fight it and make alternate plans at the same time? KotakuInAction is a valuable megaphone (lol, Leigh) and I don’t think abandoning it right off is necessarily the right call. But, that’s why I’m asking you.

I’ll be back shortly with a FullMac rant.

UPDATE: It looks like something is going down over at KotakuInAction:

KotakuInAction has just been vote locked by reddit admins, at this moment upvoting is disabled in an attempt to keep us off the front page