There aren’t too many dull days here in GamerGate country, and today was no exception. Just as I was about to fire up the PS4, I got word that RogueStarGamez, AKA Slade Villena, has been suspended from Twitter (again). Earlier in the day, he had setup a comedy Patreon in order to “pay him to leave the Internet.” He was joking about it all day, but it looks like one of those jokes was twisted around into a threat by Brianna Wu. Twitter has told him he was reported for “targeted abuse,” and he was suspended minutes later.

I can’t show you the joke tweets he made setting it up, but here’s a tweet from Rogue on his FleetCOMM game account:

I’m not going to link to the original tweets here, because without the context of his full Twitter account, you can’t really understand the parody. Yea, if it wasn’t clear he had been joking the entire time, some of the jokes about the “$5000 K a month” might have fallen a little bit flat. They clearly were a joke, however. Brianna Wu has a history of taking jokes like these and twisting them into threats. It seems like she’s done it again. Plus, she’s been trying to hide some of her own questionable conduct. The tweet below was deleted, but we have it saved at this archive link: 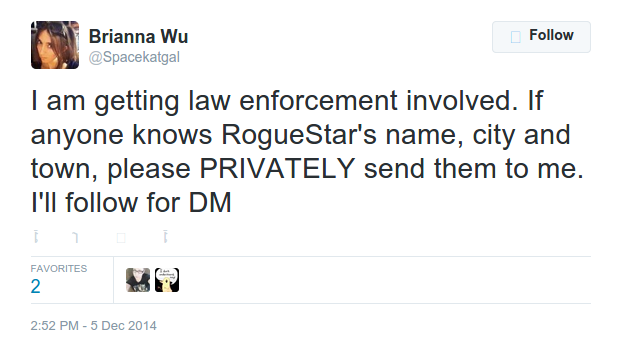 So, we have an SJW ideologue who can’t take a joke. Where have I seen that before? Not only that, the person doing the reporting is herself one of the most disreputable people on the Twitter service. They will do anything to take away our voices, even lie. Don’t censor yourself, but be mindful of their intentions, and think about how they might twist your words. Also, make those damn backup accounts if you haven’t already. You just might need it one day. Rogue’s account may be toast due to Brianna Wu’s bullshit, but I know that will not stop the man from speaking out, or honing his craft as a game developer.