I’ve done a couple posts about the way Milo Yiannopoulos was treated before and during his appearance at Rutgers University the other day. The anti-speech students who interrupted his presentation are an embarrassment to the nation and to their school. One of the administrators there, Chancellor Richard Edwards, seems to feel the same way. There is one disappointing aspect to his letter calling out the thuggish behavior, though. I’ll get to that in a moment.

First, take a look at the letter itself: 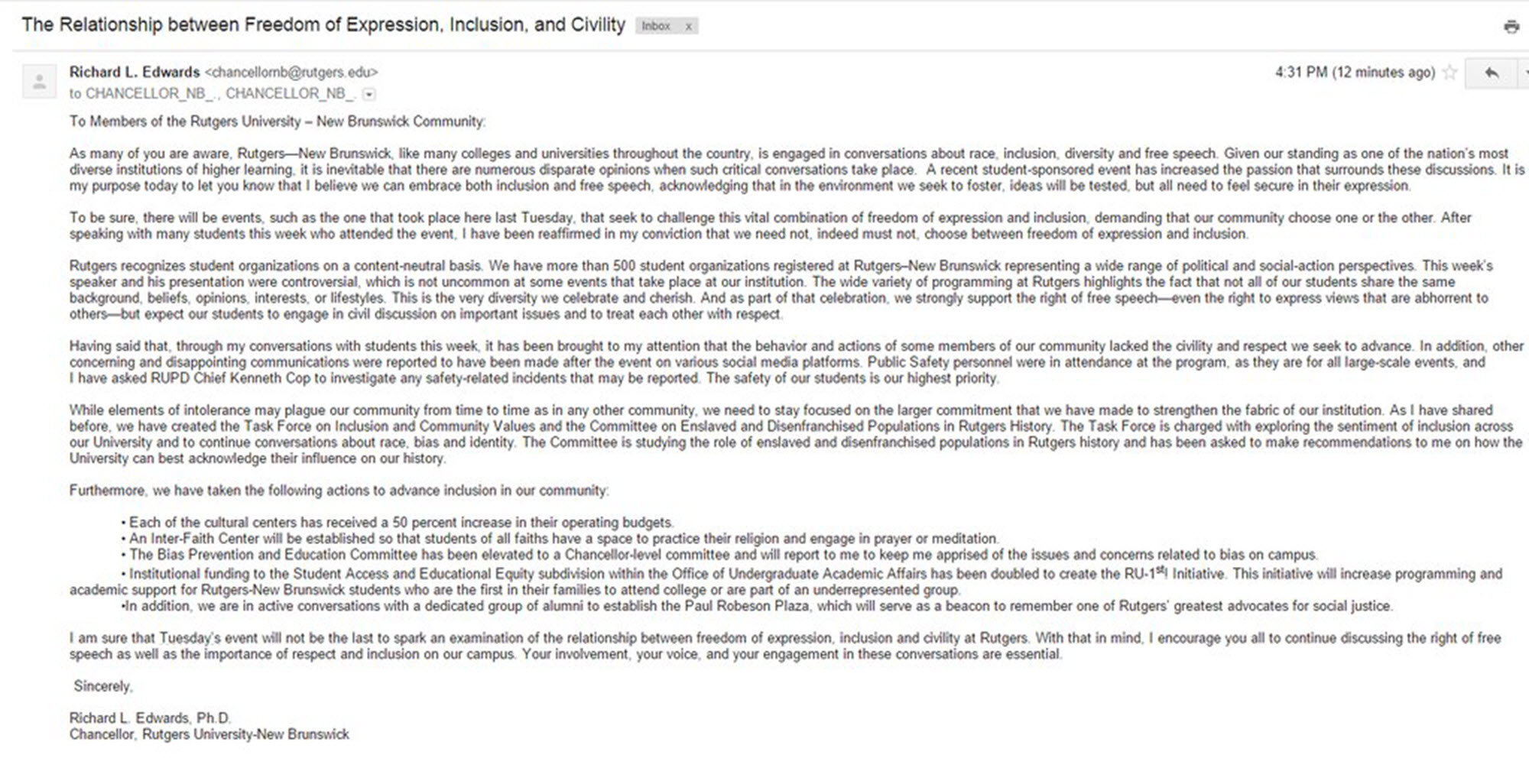 It may be hard for some of you to read it on mobile phones, so I’ll transcribe the portion that I liked best.

To be sure, there will be events, such as the one that took place here last Tuesday, that seek to challenge this vital combination of freedom of expression and inclusion, demanding that our community choose one or the other. After speaking with many students this week who attended the event, I have been reaffirmed in my conviction that we need not, indeed must not, choose between freedom of expression and inclusion.

I completely agree with every word Chancellor Edwards wrote in that passage, although the bottom part of the letter was a little sad to see. In order to placate those who have a problem with freedom of speech and expression, Edwards has increased the operating budgets of the “cultural centers” by 50%. The “Bias Prevention and Education Committee” has been elevated to Chancellor-level and now reports to him, and there are other initiatives afoot to throw more bones to the types of idiots who acted like fools on Tuesday night. Without taking a position on the validity of the moves themselves, I will just say that it’s sad to see these shitheads get more money as a direct result of their semi-violent protests earlier this week.

Still, even with all that said, it’s refreshing to see Mr. Edwards stand up for diversity of views and the right to have controversial speakers on campus. That’s what college should be all about, but as we’ve been seeing over the last few years, many educators and administrators have been fleeing the battlefield in favor of placating special snowflakes. Even though Edwards threw some money around as a sop to the SJWs on campus, I still like his overall tone here and I hope more people will stand-up like he has done.