I’m sitting here getting ready for the New Hampshire stream tonight, but that doesn’t mean I can’t come talk to you guys a little bit before it starts. I have 3 stories I want to hit, so let’s see if I can get them all done for a change. First up is a little update on Milo Yiannopoulos’ tour, which makes a stop at Rutgers University tonight. It looks like this event might have some fireworks. We can only hope that the university is prepared to protect Milo against the crazies. But if they aren’t, it looks like some fans might be willing to do the job for them.

Campus Reform has a post on all this already, and it’s filled with delicious little nuggets like these…

One post from event coordinator Aviv Khavich tells students that they may now reserve only one free ticket per person instead of the ten they were originally allowed due to “overwhelming trolling of the eventbrite.”

“NOTE: I have become aware that there are plans to protest this event and block the streets. There will be police at the event. We won’t stop you from protesting, but anyone attempting to disrupt or obstruct the event in an illegal manner will be dealt with by the authorities,” Khavich warns.

One attendee took it even further on Facebook when she said, “My husband’s 6’5″ and 245 pounds with lots of barfighting and military experiencewill (sic) be there to defend Milo against all comers if need be, so you might wand (sic) to think three and four times…”

I see. I wouldn’t mind seeing some thugs get knocked out for their troubles. Of course, protesting is all well and good. It’s when you try to disrupt the actual event that things get dicey. Stand outside and do your thing, no reasonable person should have a problem with that. When you try to shut speaking engagements down or threaten speakers, then you deserve everything coming your way, including a possible ass-whipping.

Some #BlackLivesMatter idiots are also organizing on campus tonight. As I said, I have no problem with protesting, but if you guys cross the line, you’re going to jail. In my opinion, there are much better things to spend the night in the clink over, but again, that’s my own personal view. If you wanna go to jail for protesting a fabulous gay man talking shit, then be my guest. 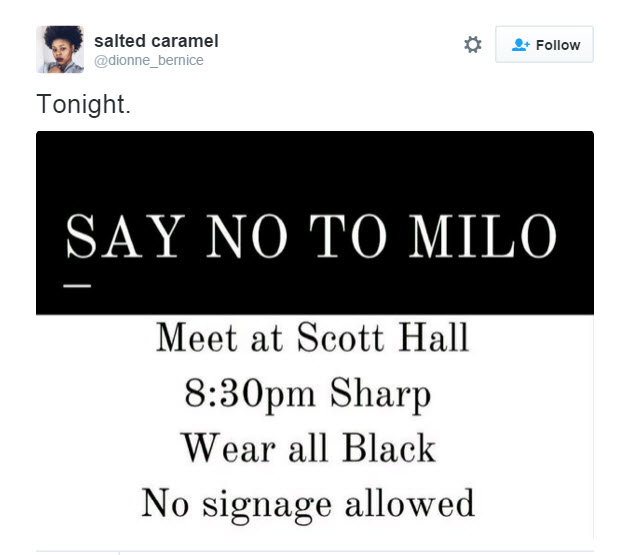 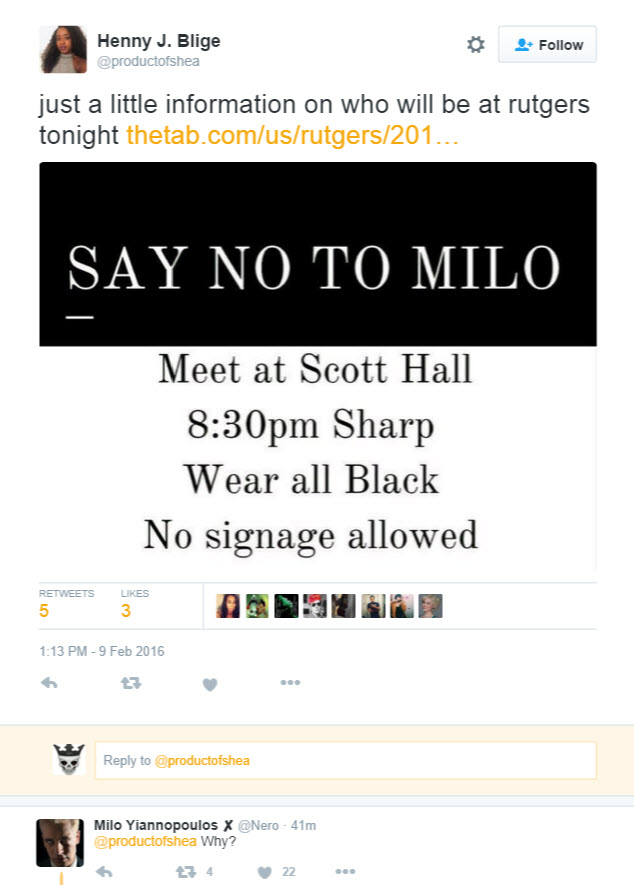 I CAN EVEN, YOU GUYS! Lol, tonight’s going to be great, isn’t it?