Shatner Roasts Transgendered Misandrist on Twitter, Much to the Dismay of SJW Press

William Shatner is a class act. He often slams radical feminists and their ideology on Twitter, as I’ve recounted here before. To be sure, he usually does it in a more understated way, or with some caveats. But still, even calling these cretins out in the first place is more than what 99% of celebrities would ever do. Hell, in most cases, the celebs are actually propping up poisonous modern feminist ideology.

The latest fight Shatner had is about misandry, which undoubtedly exists. Feminist ideologues spend an inordinate amount of time arguing it doesn’t exist, which I’m sure comes as a shock to you all. Dishonesty is not something that crew is normally associated with. Nope. Never.

Take this Mary Sue column about the Shatner episode, for example. Right at the top, the goon who wrote the piece describes misandry thusly…

William Shatner got involved in a discussion about misogyny and its imaginary counterpart, “misandry”…

But later on, the same author admits that misandry is in fact a real school of thought, but there’s reasons for the hatred, you see. The women who hate men simply must be cut some slack! After all, this hate doesn’t actually affect anyone. That’s insanity!

Are there women out there who hate men? Of course there are. But what does that hatred actually do to men, especially when you consider that a lot of that hatred is based in legitimate fear (women are more likely to face violence at the hands of men, be objectified by men, be paid more than men, be forced to deal with the consequences of having children in a way men will never be)?

So, misandry is fake…except it isn’t. Got it. That’s the kind of logical consistency that I’ve come to expect from feminists. The other thing I’ve come to expect? Planted stories in their media, like the next hit about Shatner, from Mic. The person who “made the news,” according to her tweet, is Mari Brighe.

ROTFL, my spat with Shatner made the news. What is my life even?https://t.co/JxsfQDmext 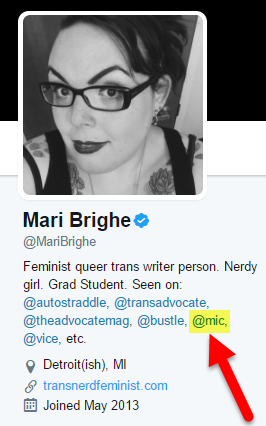 That’s all well and good. I don’t begrudge outlets who want to promote a certain view featuring, well, people who support that view. But this person has actually written for the outlet in the past. It would be like Nora, or Christ Junior getting featured on this site and then bragging about “making the news.” Not really. You just got featured on a site you’ve been featured on in the past.

And, as expected, the Mic hit doesn’t actually mention the fact that Brighe has been featured on the site.

"Misandry" is a myth derived from men's hurt feelings.#MasculinitySoFragile https://t.co/oIvBKxclZB

So here we have a transgendered individual whining about misogyny while also decrying misandry as a myth. I’ll leave the comment section with the task of dissecting the many multitudes of problems with the statement by Brighe. Oh, and Shatner. Shatner definitely had something to say…

You just keep believing it doesn't exist and keep on hating men. I'm sure it makes you sleep better at night. 🙄 https://t.co/dnQBSYThr9

Straight flame from the Captain. Keep it up please, good sir. Normal people with half a brain remain on your side.