Shkreli Terminated From Twitter After Trolling Teen Vogue Snowflake, Even Though She Stalked Him First

I’m not sure how trolling some snowflake from Teen Vogue is grounds for being summarily dismissed from Twitter, but that’s the world we live in nowadays. Lauren Duca is the woman in question, and the last time I saw her, she was getting rekt by Tucker Carlson on Fox News.

Anyway, Martin Shkreli has been picking at her the last few days, acting like he wants to date her, etc. It’s clearly been done in a joking manner. Well, it’s clear to anyone who has a brain. Unfortunately, those are in somewhat of a short supply lately. Today, he sent Ms. Duca a direct message asking her to be his “+1” to the inauguration on January 20th. She screenshotted this and send it out to her 135,000 followers.

I would rather eat my own organs pic.twitter.com/IgeCRZqk8w

After that, Shkreli decided to give his Twitter page a new look. 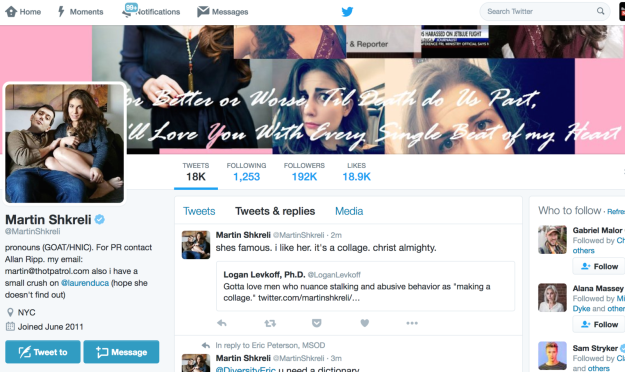 Well, that set the SJWs on the warpath…

How is this allowed @jack pic.twitter.com/Wof8MlYHTL

Like, that's a picture of me and my husband. I feel sick.

It’s…a…joke. And the part that makes her “sick” feeling particularly hilarious is that she has stalked Shkreli in the past. And not on Twitter mind you. In public.

Maybe he had reason to believe she would be warm to his advances? No one knows what was said there at Guy Fieri’s Flavor Town, a place known for its romantic setting.

But in all seriousness, this whole thing was a (perhaps overdone) joke by Martin Shkreli and was definitely not grounds for termination. If anything, they could ask him to delete some tweets and change the pictures on his profile page. This is a huge overreaction by the powers that be at Twitter. Jack, please reinstate this man immediately.