I’ve written here about Randi Harper’s bullshit plenty of times, including earlier today. But I just saw some shit that’s even worse than the EFF connection, in my mind. Randi’s buddy at Twitter Support, the one who used to work with Chris Hansen busting pedophiles of all fucking things, is now actively censoring Harper’s critics. And the tweets themselves weren’t vulgar at all. I can’t see anything wrong with them, actually. See for yourself:

I mean seriously, what the fuck is up here? These tweets are pretty innocuous. I know for a fact that I’ve sent out a lot worse lol. Why is Randi singling Stephanie out for silencing and not me? Is it because Steph is neutral, and Harper fears that her attacks will stick more? If you ask me, I think that’s exactly the reason she’s being attacked like this. This is exactly what we are fighting against.

[email protected] @HarkenRebirth @Support @Sushilulutwitch @twitter She is. I reported it myself. Randi admits it in Ghazi http://t.co/engtUK0ZfH

And what part does Randi’s big buddy at support play in all this? I revealed that to you in an article last month, if you’ll recall. As I mentioned at the top, she’s the woman from To Catch a Predator, oddly enough:

More on Big Randi's contacts at Twitter, in case you missed ithttp://t.co/engtUK0ZfH#GamerGate pic.twitter.com/6d3VHBgOzl

Either way, we need some fucking answers from Twitter and Ms. Harvey immediately. Why was this woman silenced? Also Randi, some free advice: maybe people would take your OAPI bullshit more seriously if you didn’t go around harassing people and censoring their speech on a damn near daily basis.

As you know, I’ll update this story as more comes in.

UPDATE: Randi comments further, seemingly admitting that she personally behind this attack on free speech:

Under spam: "If you send large numbers of unsolicited @replies or mentions"

Sealions, beware: A look at the Twitter Rules http://t.co/vBSqMhxFQ4

UPDATE II: Unbelievably, Twitter is now claiming that this was all done in error…even though Randi Harper’s censorship loving ass has been gloating all evening. If you believe this particular line of bullshit, I have a bridge in Brooklyn to sell your dumbass. They are backpedaling as fast as they fucking can, and it’s as plain as day that they’re trying to cover up their censorship. This is unacceptable.

Someone likely needs to be fired for this breach of trust. Randi Harper is receiving preferential treatment from the powers-that-be at Twitter. The public deserves a full PUBLIC report into this matter, at the VERY LEAST. I’ll wait and see what happens, but given how we’ve been treated so far, I won’t be expecting much.

So which is it, @Support? Was it an error, or deliberate censorship? If so, why has Big Randi been gloating all night?#GamerGate 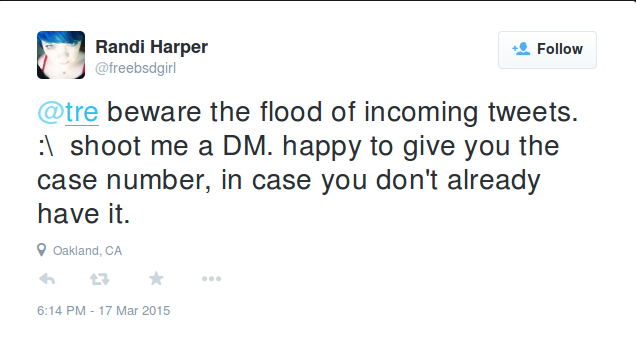