Well, score another one for SJW stupidity. Lately, they’ve been busy on Twitter. What’s kept them preoccupied, is an attack on Pro-GamerGate developers, and their financial interests. One of the main targets of this harassment, has been Jennifer D’aww, a very talented female supporter of our cause. You see, she has a game that’s pretty awesome, called SeedScape, and she had recently put it up on Steam Greenlight. I guess the braindead SJWs thought this was going to hurt her somehow, but, it actually spurred her game into “greenlit” status, which is a huge achievement for any developer. The screen below describes the Greenlight process, and how things get greenlit, for those unaware of how it works. 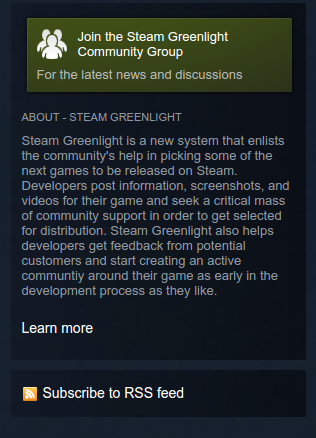 So, the SJW loons figured the would harm D’aww’s chances by running her down on Twitter, and distributing lists among their demented circle of Kool Aid drinkers. Too bad GamerGate rolls a lot fucking thicker than they do. You see, we have legions of members who are will to put in time, money, and all the effort required to complete this mission. Like I just said on Twitter, the cause is bigger than any one of us. If you have faith in our passion, which is games, and the creators that support the games and ideals you like, SJW nonsense goes nowhere. It’s just another fail.

And the GamerGate Win!

Always believe in your consumer base and not some clique. Gamers built this industry. NEVER Forget that.

We congratulate Jennifer, and encourage any other neutral or pro-GamerGate devs to step forward and enjoy the benefits of our support. SJWs talk the talk, but they don’t have the quality we do. Look at Depression Quest, their Steam Greenlight success, and then examine SeedScape. I’m sure Jennifer might not go there, but I will. Depression Quest is garbage, and I can assure you that more work has gone into running this modest website, than some trifling effort like that.  I know nothing about game development, but I know quality craftsmanship when I see. I’ll be excited to play SeedScape myself when it’s released. Thanks again, anti-GamerGate idiots. You once again spotlighted your incompetence, in more ways than one.