There’s been a lot of talk on Twitter the last couple days about a young Steven Universe fan artist who was allegedly bullied into a suicide attempt by psychotic SJW thugs on Tumblr. Originally, I didn’t want to talk much about it, but I’ve since been handed enough info to bring it to you. I still can’t verify it 100%, but I was told by trusted sources that they talked to the girl’s father and he told them that she is resting comfortably now and trying to recover. Also, we have a video from the girl herself, in hospital garb. That’s a lot of circumstantial evidence, so here we are.

I’ve seen her alleged real name and her father business website, and all that. It looks a lot more solid now that it did originally, is what I’m getting at. Now, the people saying she killed herself are still fucking wrong, but whatever. Let’s move on to the story, starting with the info I was relayed about the her current condition. I’m withholding his name, obviously:

Her father said he was touched that people cared enough to reach out. Also, she is recovering in hospital.

Let’s take a look at her original post. As I said, I held back from running this story until I learned more…

While Zamii being alive and healthy is certainly the most important detail of this story, the depravity of the SJW community on Tumblr is what is truly disgusting. Rather than feel any sort of sympathy for this young girl, they refused to take blame or even reflect on their actions. Even worse than that, some of them gloated about supposedly making her kill herself. Talk about fucked up. I can’t think of anything worse over my last year here at the site. Some evidence is forthcoming… 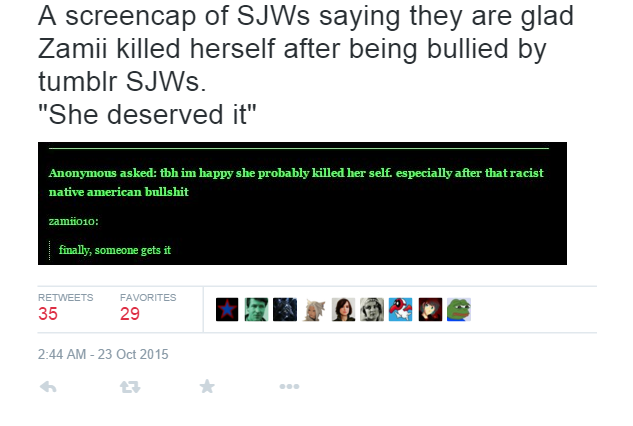 can you tell i'm absolutely fucking livid over this zamii thing. the #StevenUniverse fandom can go fuck itself. pic.twitter.com/6crJp6sUN6

Those are valid reasons to tell people to kill themselves, right?
Not PC enough, I guesshttps://t.co/PeIYJFfSLl pic.twitter.com/X0nkRbsHN6

They also wanna bring Zamii’s personal life into this. I have no idea if that allegation is true, of course. Most likely it isn’t, knowing these lying pieces of shit… 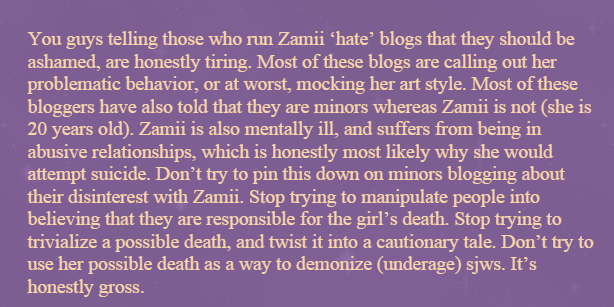 I’m going to go get ready for the Killstream, which is tonight at 6PM EST. I will update this story if more comes in, however. It’s just another illustration of how insane SJWs have become. Say what you want about me, but I’ve never once thought to take it this fucking far. These people are legit crazy. How could you participate is some insane shit like this? The people quoted talking shit about this poor girl are scum, there’s no other way to put it. Anyway, lemme know what you think, as always, and check out the show tonight if you are so inclined.