I’m getting lucky every time I step back to the desk lately. There’s big happenings on several fronts pertaining to new Deus Ex: Human Revolution and the controversy surrounding it, which was of course cooked up by the radical SJWs. What’s the issue, you ask? Well, in the preview trailer shown at E3, the term “mechanical apartheid” was used. I know if you’re like me, you think this is nothing more than the idiots on the other side getting riled up again…over nothing. But people involved with the game, including the voice of Deus Ex protagonist Adam Jensen, have come out swinging today. It’s a very beautiful thing.

Let’s start with the guy who came up with the apartheid term, Gilles Matouba. He went over to KotakuInAction and put up a long-ass thread answering the critics. If you’ll notice, people are going to KiA to air their grievances with the SJWs a lot more often lately. It’s because we’ve created a “safe place” (lol) for them to speak their minds. It’s almost like they don’t feel comfortable with the likes of Kotaku and Polygon. They know it will get spun into some bullshit if they take it to those jabronis.

Let me go ahead  hand it over to more than capable Mr. Matouba:

Sorry for the typos and weird syntax, english is not my mother tongue. I am Gilles Matouba and there is a thin chance of you knowing me. Still, I am a veteran french game developer with 15 years of experience in the industry. Mostly at Ubisoft and Eidos Montreal. Until september 2014 I was the Game Director of DXMD at Eidos Montreal. 3 years ago Andre Vu, the Brand Director of the DX franchise, and I coined the term ‘Mechanical Apartheid’. Thing is… I am Black (& French…). And Andre is Asian (& French).

When we decided to go all-in on delivering the experience to play as Adam Jensen, an Augmented, in a world agressively segragating his own kind, we actually wanted to offer to our audience something unique. Something that was close and very personal to us: The experience of being torn between 2 worlds and 2 identities. Augs calling you the ‘uncle Tom’ of the non-augs, non-augs always insecure when you’re around, always deeply being scared or appaled by your mechanical body. Somehow, it was our own individual stories… We wanted to share a little part of our own life experience (on a super dramatized degree, of course) as visible minorities in a world of prejudices sometimes not well tailored for us. We also used the reference of south africa, israel, even brasil, french and american ghettos and any country ressorting to walls in order to segratgate a part of their own population. We meant it. This was important to us to not half-ass these analogies. BECAUSE THIS IS DEUS EX.

Racism is a dark part of our human nature and we wanted to treat this subject. It was especially important for ME to treat this. So it makes me sad and angry that these ignorant people just ASSUME that everyone behind this game is ill-spirited, stupid, and more importantly for me, that they that they are all WHITE. (For them devs==white, gamers==white)

What these bloggers and tweeters did to me here is beyond mere insults: They have degraded me and have literally erased my identity as a black developer and as a black creator that just wanted to share a piece of himself with this game. I wish that they will feel bad about it. I wish they will have the decency to apologize of their gross false assumptions and accusations. To apologize to all the people back in Quebec that have been working hard FOR YEARS to make this game to happen. But since they have no spine, no shame and no self respect they will simply ignore this post (once again denying me voice, legitimacy and identity) and will at best move on another AAA target to toss their freshly defecated shit at. They don’t deserve anyone’s attention. They don’t deserve our industry, our games and the dedication we put into them. They disgust me.

TL : DR Asian guy and black guy came up with the term Mechanical Apartheid 3 years ago. Black guy not happy about the SJW shit tweets and wants to call them out and expose their stupidity. Black guy is not their shield.

I could see how this would be frustrating for someone like Gilles. Simpletons who think they know better constantly shit on your work, when they don’t even know the first thing about you, or your colleagues. They never learn, do they?

Hello KiA. This is me. pic.twitter.com/8cfyCIqEVX

People like this loser (who writes for Leigh Alexander’s Offworld): 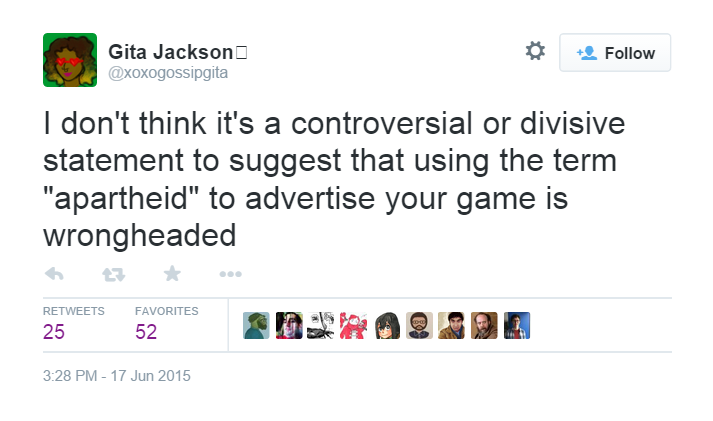 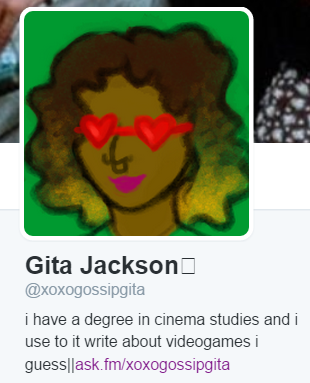 Blatant lie. When did Gilles ever say that, you moron? #GamerGate #NotYourShield pic.twitter.com/5lIq3sJ4IJ

(He did claim NotYourShield, but still. This is a misrepresentation, in my opinion.)

Or these shining examples of idiocy:

But Matouba wasn’t the only one to speak out today. The voice of Adam Jensen also weighed in. It’s getting hard out there for a rad fem, isn’t it?

All-in-all, it was another banner day for those of us who support artistic freedom. Our totalitarian opponents simply can’t understand why they keep getting their asses handed to them. Well, it becuase game devs don’t like you, or your whack ideas. It also has a lot to do with how you present those your odious agenda, let’s face it. You thugs are always trying to shame and ostracize, and people are sick of that shit. So, please continue along this same path. It’s working out swimmingly.