The SJWs never take a night of from their campaign of censorship. Earleier tonight, they bullied The Escapist into taking down an interview they had conducted with military veteran, and minority developer, Slade Villena (aka @RogueStarGamez). This time, they used an out of context IRC chat-log to accomplish their goals. Rather than face GamerGate on the Battlefield of Ideas, they have again resorted to trying to silence us.

At first, I was disgusted with The Escapist. I had been giving them the benefit of the doubt, since their recently announced revamped ethics policy. That had seemingly flew out the window with this decision. While I hadn’t bought in 100%, it still felt like a massive betrayal.

SJWs at it again, trying to silence @RogueStarGamez . I'm ashamed of @TheEscapistMag for bowing to the wishes of censors. #GamerGate

But, after listening to RogueStar himself, I began to see things in a different light. I can’t say I’m not still a bit letdown by the decision. But, we need to place the blame right where it belongs: on Alex Lifschitz, “Little Hitler” Ian Miles Cheong, and the SJW anti-speech crew. But we need to focus our fire on the right people. Yes, Alexander Macris and The Escapist have fallen short, in my view. However, they aren’t the root cause of this problem. 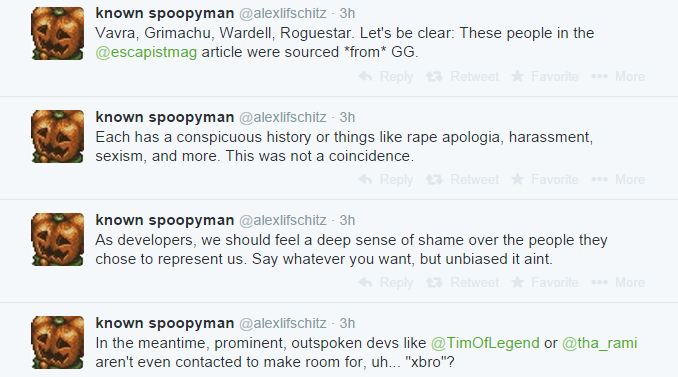 Read Alex Lifschitz allude to Greg Tito’s career being destroyed if he doesn’t censor GamerGate and RogueStar. “Nice career you have there, Greg. It would be a shame if anything happened to it”: 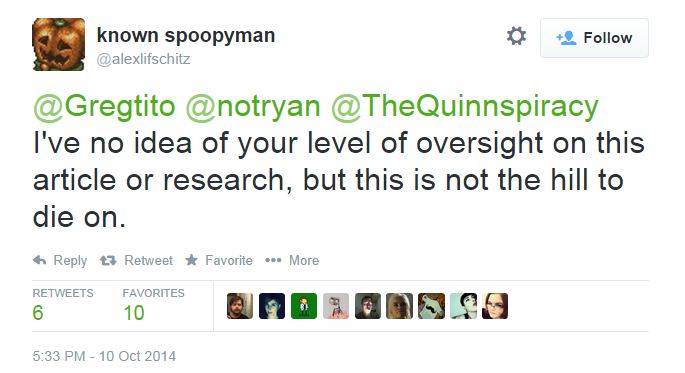 As you can see, the The Escapist was under tremendous pressure. I think Mr. Villena said it best himself:

Basically, I called out Zoe Quinn on her bullshit. What she said about those “infamous IRC logs” is basically all out of context, if not, an overreaction to a channel used for parody and fun. IRC shitposting is NOT “harassment”. Its like citing comic book text boxes as your “proof.”

Anyway, please don’t get mad at The Escapist. You can still view my articles on cache. Literally Who, and friends, are basically freaking out because I called them out. They are over-reacting, you shouldn’t, y’all better.

My name is Slade Villena, an independent game developer, a USMC veteran, a GamerGate supporter since Day 0.

They want to erase any trace of opposing viewpoints, as they know it’s a major threat to their minority views. They can only win by fixing the game. We win, by rising above, spreading our message of inclusiveness and freedom, and calling out anti-GamerGate hypocrisy at every turn.

Oh, and just in case you wanted to read Rogue’s interview, some of our fine associates have already archived it HERE and HERE. That’s right, it’s the Internet. Nothing ever goes away, and attempted censorship almost always backfires.