Social Justice can sound great on paper…until it shows its teeth. If the recent assault on Lauren Southern wasn’t enough to show the ugly side of social justice, another example happened. Becky, an 18-year-old girl studying criminology, got into an argument on Twitter about the gender binary. Little did she know that some social justice warriors would see this as enough of an affront to try to ruin her life.
Total
0
Shares
Share 0
Tweet 0
Pin it 0

Social Justice can sound great on paper…until it shows its teeth. If the recent assault on Lauren Southern wasn’t enough to show the ugly side of social justice, another example happened. Becky, an 18-year-old girl studying criminology, got into an argument on Twitter about the gender binary. Little did she know that some social justice warriors would see this as enough of an affront to try to ruin her life. 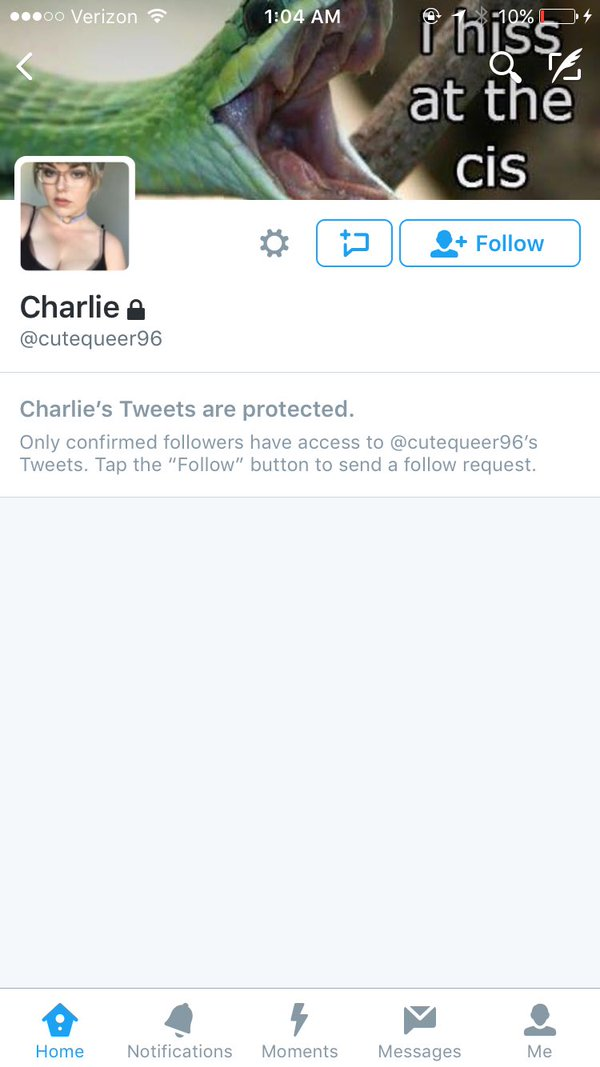 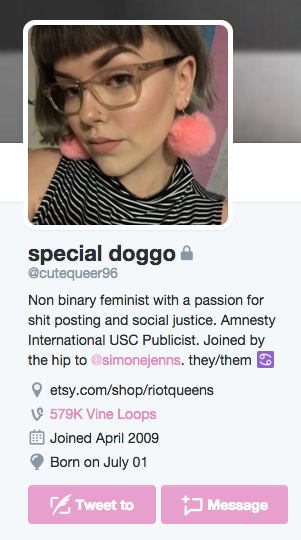 Charlie is a non-binary feminist with a passion for social justice.

Charlie wrote a letter to Becky’s school to try to get her kicked out because of a disagreement on Twitter.

Charlie confuses disagreeing with somebody on Twitter with a real life fistfight.

As seen with the recent assault on Lauren Southern, it doesn’t take a lot for SJWs to equate opposing opinions with physical violence. 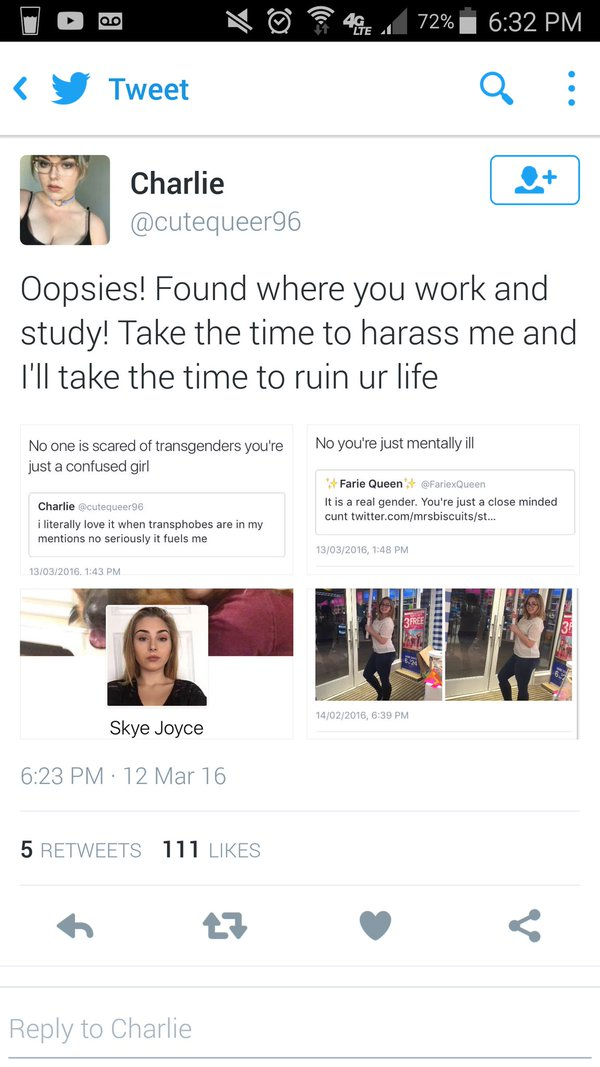 How could this all have started? Directed hate speech campaign? Threats of violence? Pressured into drinking bleach? No, simply replying to a tweet.

Charlie’s account was made private, because she’s obviously a victim of undeserved internet abuse, I can’t show all the screenshots to support the story.

Still, I’ll try. On March 12, Charlie made a post asking when was “international non-binary day”.

Charlie replied that she didn’t need one because non-binary genders don’t exist. Seems like an innocuous snarky response, but for non-binary people, denying their belief in 71 genders is equivalent to a death threat. Saying anything they consider “horrible” opens the door to full retaliation in any way imaginable, like throwing urine on somebody or trying to ruin somebody’s life. 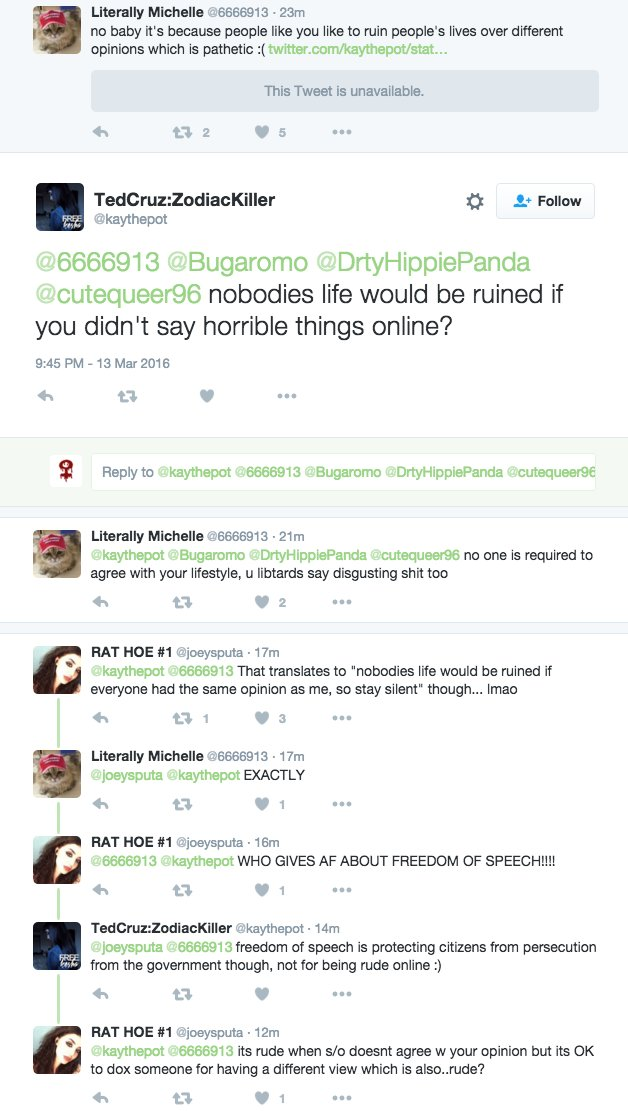 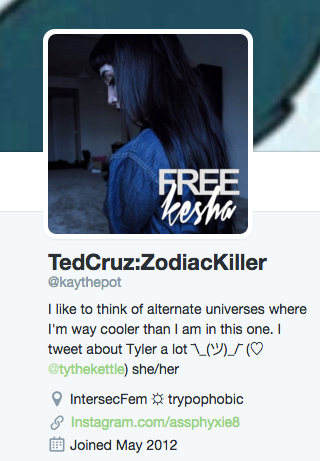 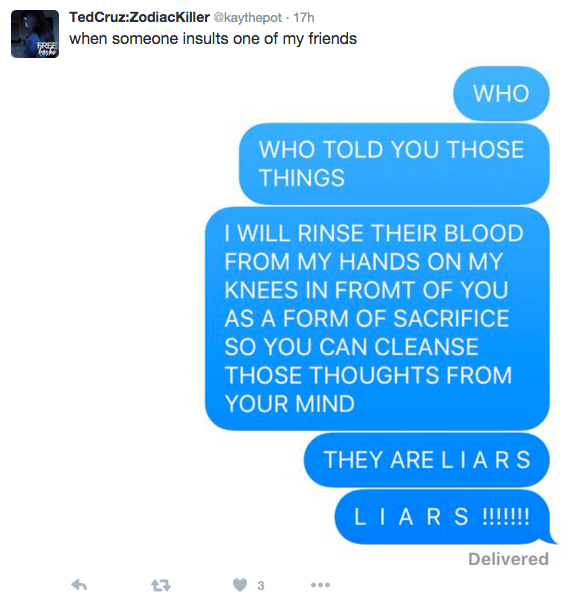 And exercising her right do so. 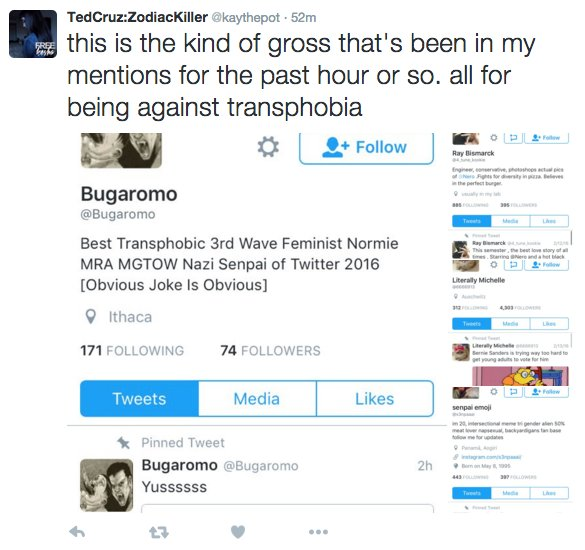 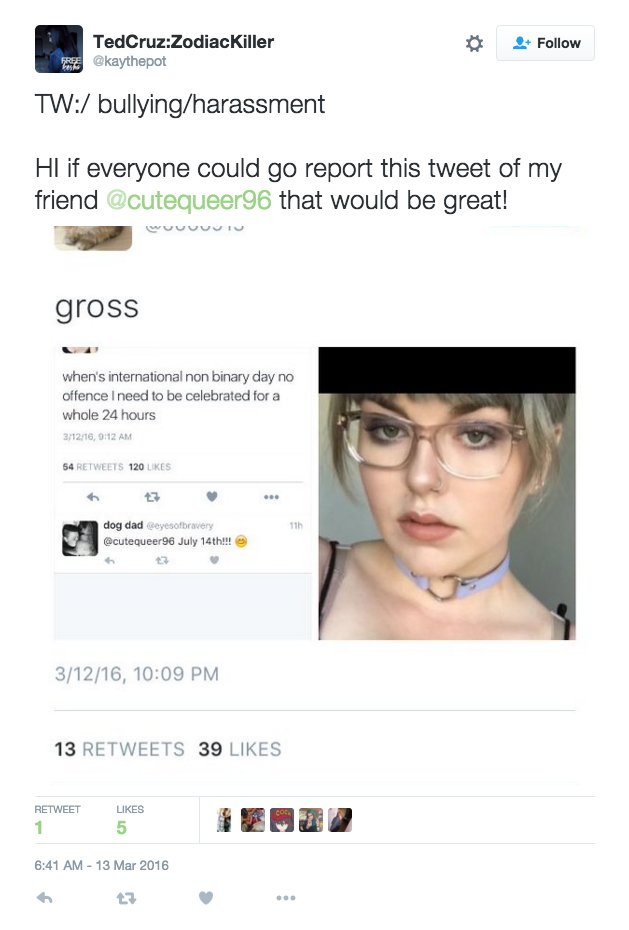 I’m not sure if the trigger warning was supposed to warn about “harassment” in the quoted post or warn about inciting targeted harassment and bullying. Notice the double-standard. Calling somebody gross is completely acceptable, while being called gross in return is completely unacceptable and transphobic. Free speech only works one way, I guess. My free speech allows me to say anything I want to hurt your feelings but your free speech ends where my feelings begin.

She is also an advocate of blocking people preemptively. 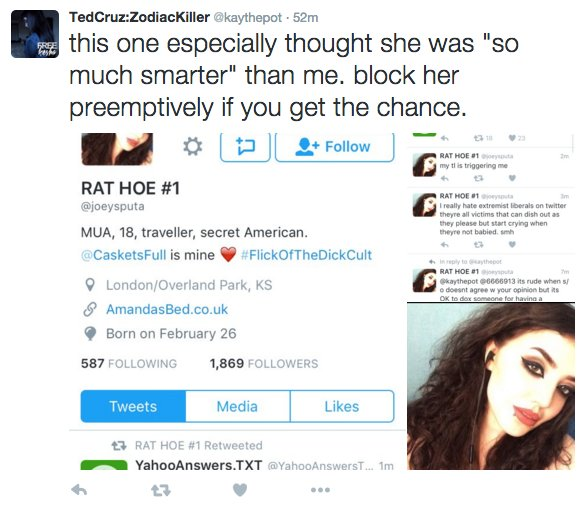 Except the people that they are planning to harass as a group. Double-standard again.

Why sleep when there’s bullying to do? 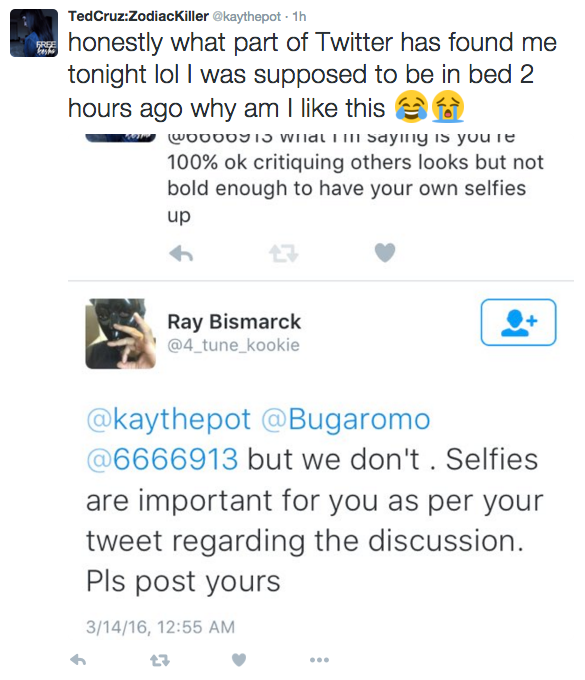 What part of Twitter has found me tonight? The part of Twitter that says “no” to social justice bullying tactics and smear campaigns. I’m honestly surprised that nobody tried to implicate GamerGate as the unseen omnipotent force of evil behind all this and implied that this was a highly-coordinated attack against trans-women. The people that usually make comments like this were probably still too tired from the online harassment panel at SXSW to weigh in.

Oh and in case you didn’t know the reference to #FreeKesha in her profile picture, Kesha is a singer that accused her producer of rape without proof and then sued Sony, using that as a reason to be let out of her contract without penalties. Even if she testified under oath that it never really happened (which she did), she has a strong following that “listened and believed” her whole story and advocated social justice. The judge ruled that she couldn’t be let out of her contract based on her claims. She never reported any sexual assault to the police, either. My opinion is irrelevant in the matter, but here it is anyway. If it really happened, she should have reported it to the police as soon as possible (6 years ago) but if it didn’t really happen, it delegitimizes genuine rape survivors and overall amplifies the level of doubt that authentic victims face when reporting a rape. There might not be a rape culture in the West, but there is definitely a false rape allegation culture on the rise, Jackie from UVA being the most famous example. 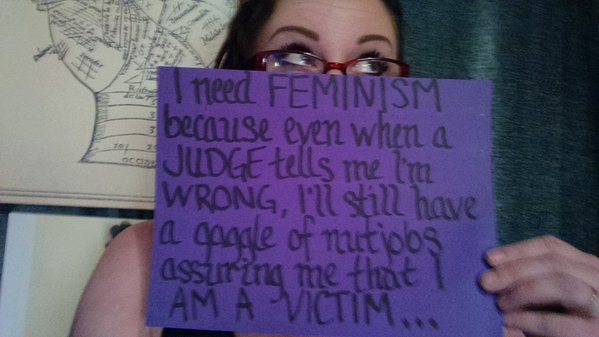 Back to the main story. Let’s see what happened in-between the first interaction and the last straw. I had to dredge through several timelines to find (publicly available) information about all the players in the event. Much of it was simply just teenage girl banter going back and forth and quote-mining to try to expose dirt on the other party. Here is an example. 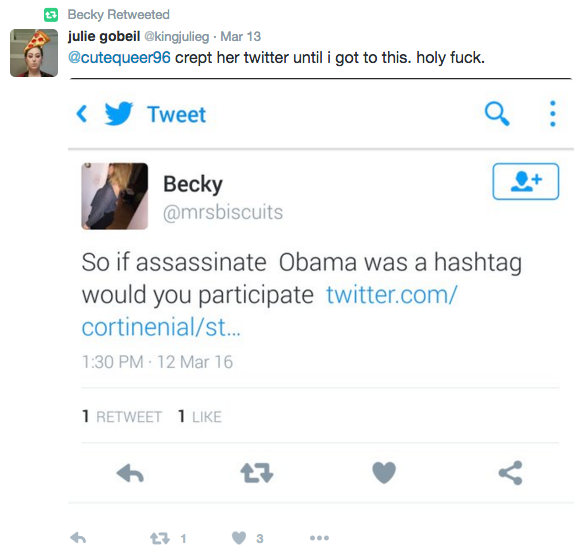 Here’s quote-mined smoking gun that Becky wants to assassinate Obama. Call FBI, NSA, SS, DMV and report her! It might be interesting to look at the whole conversation in context first before jumping to conclusions though. 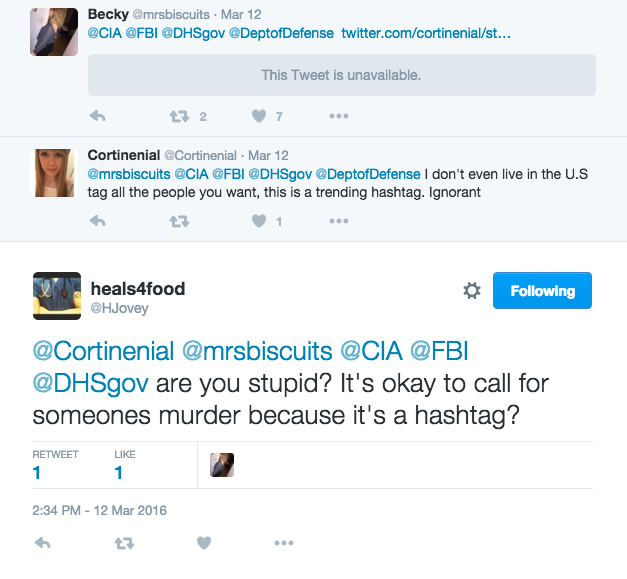 There was also this pinned tweet that generated lots of accusations. I wonder why… 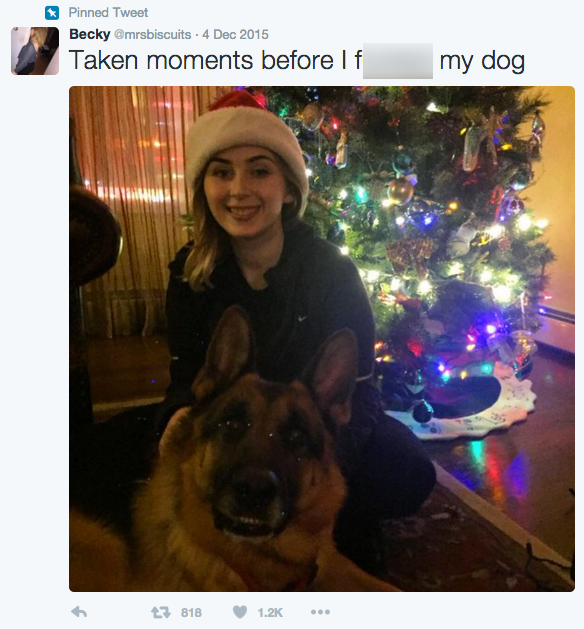 Yeah, hmmmm, right, I’ll assume this one was a joke for my own sanity and respect of Becky. Moving on…

Let’s see some back and (no-)forth between Becky and Charlie, since Charlie’s account was made private before I could take screenshots. 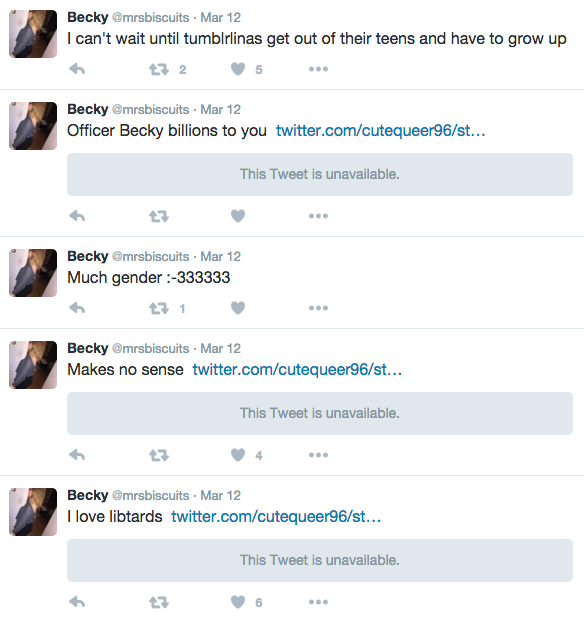 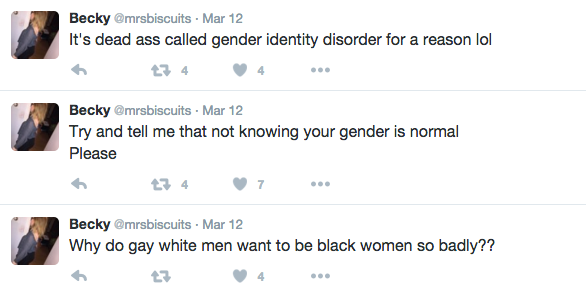 Maybe not everybody will agree with Becky’s opinions but Twitter is a public forum and free speech has not been abolished (yet). If Becky or Charlie had simply muted or blocked the other one, this whole incident could have been avoided. 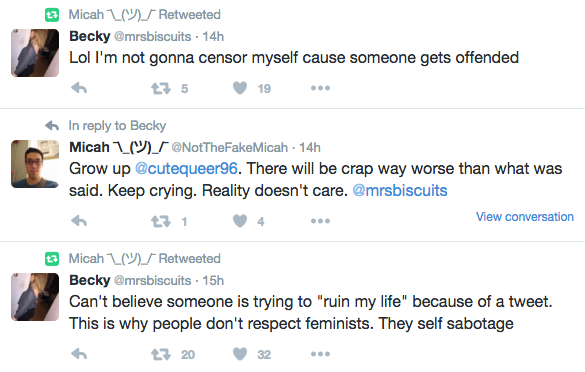 Here’s some back and forth between supporters of each respective side. 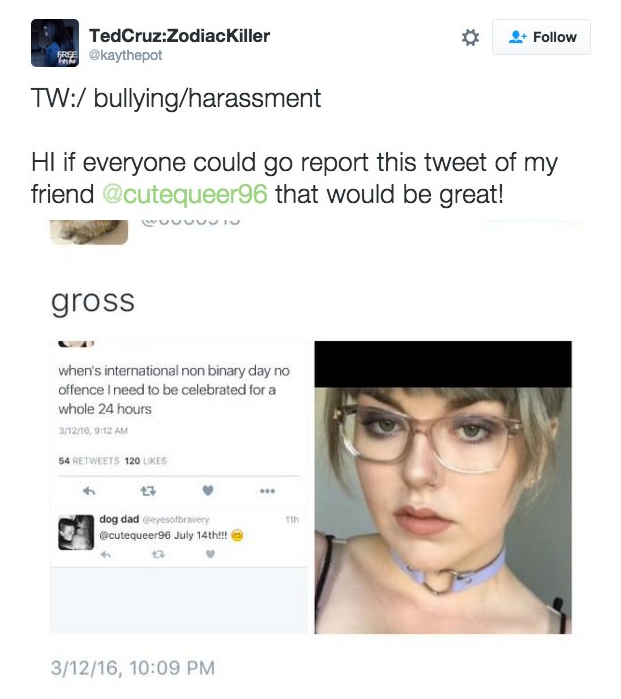 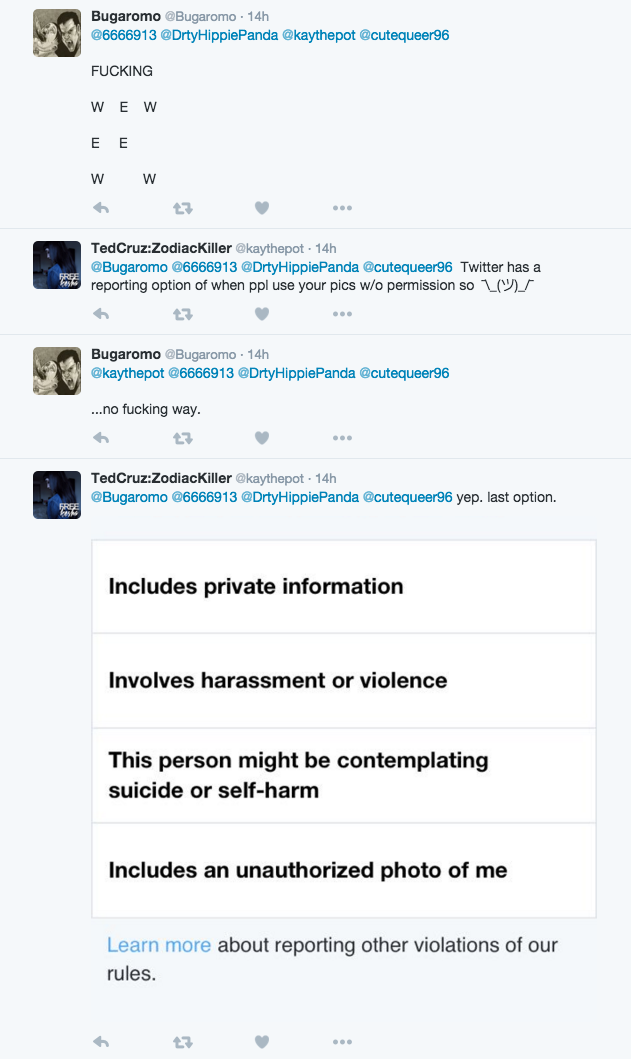 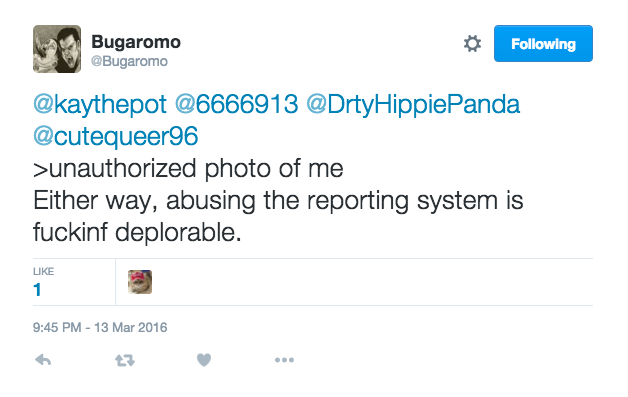 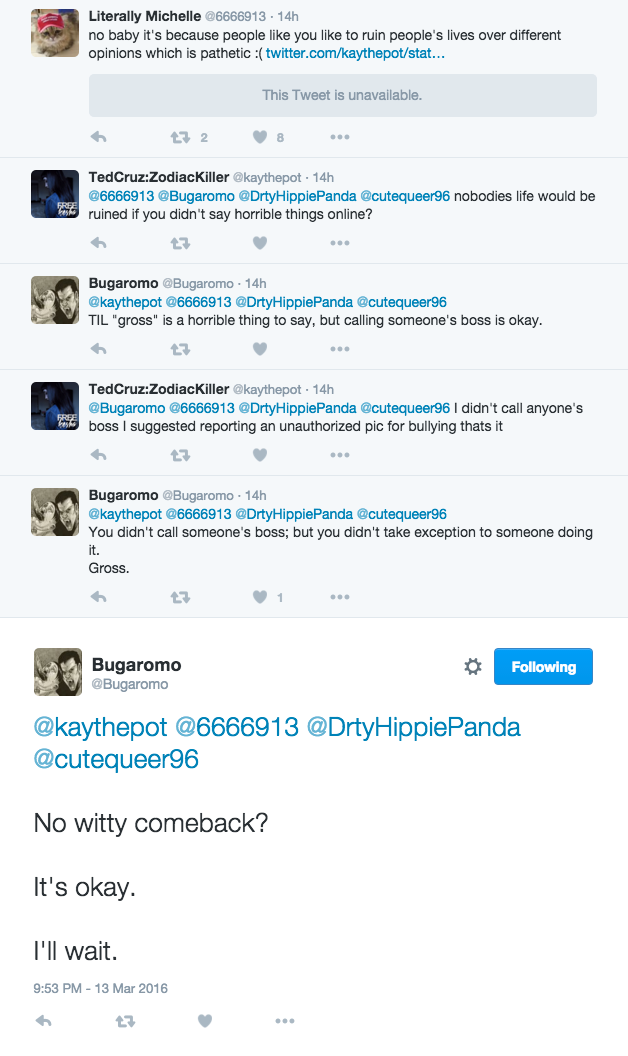 Let’s see some of the overwhelming public support that Becky received during and after her ordeal. 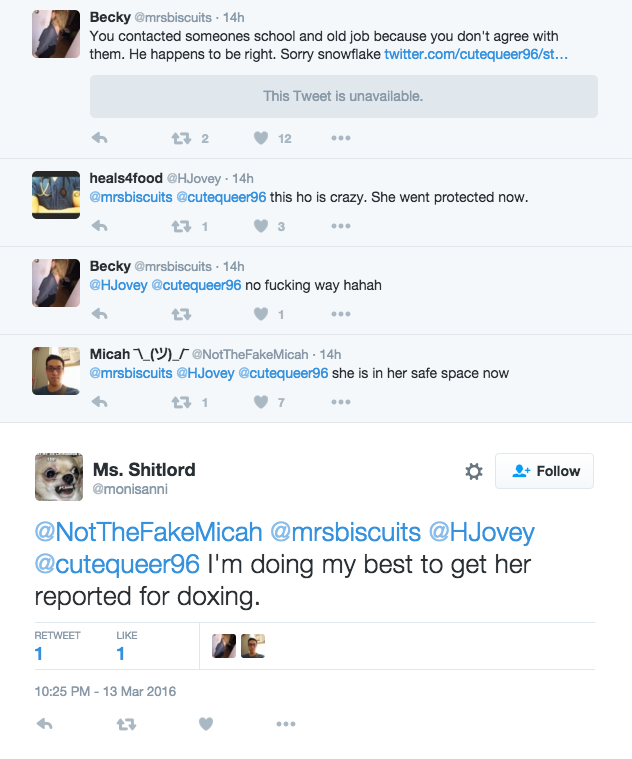 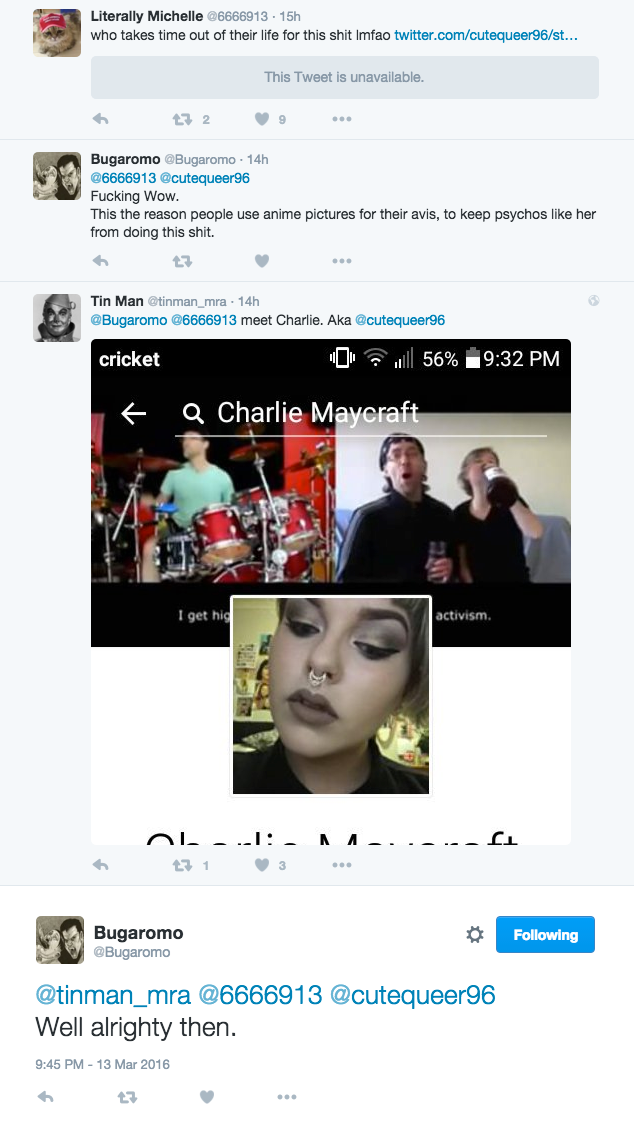 On a side note, the above picture does not constitute “doxing” per se, as she voluntarily publicly revealed her real name in the initial letter that she sent to Becky’s school. I’m getting flashbacks of the Laughing Witch vs. Thunderf00t incident. 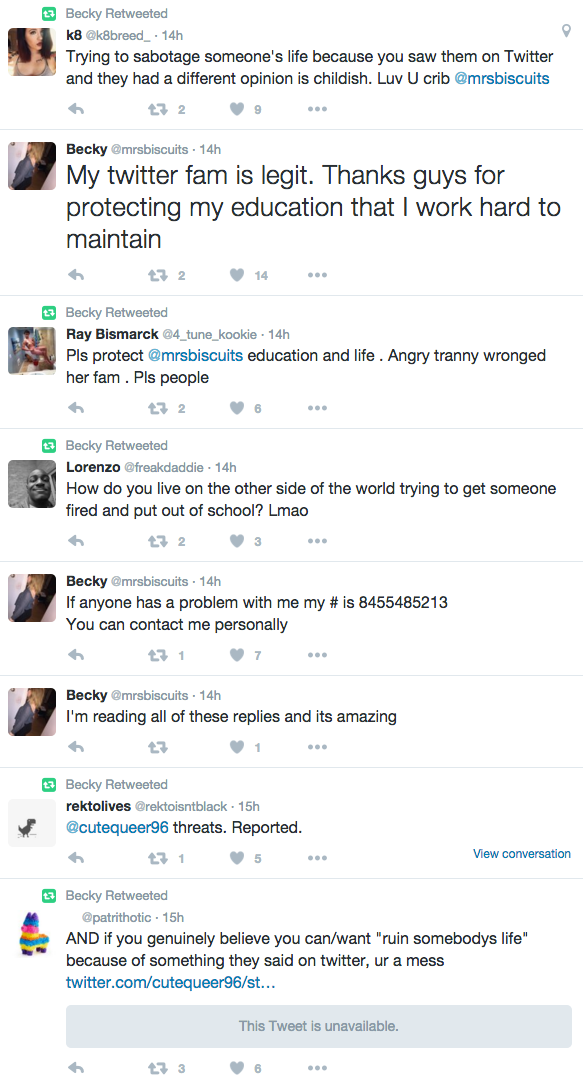 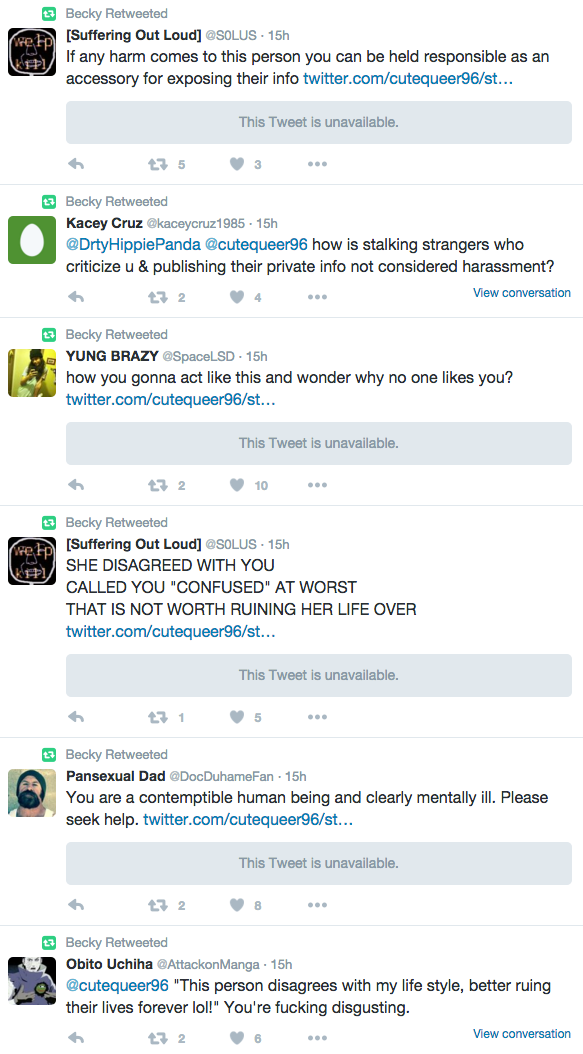 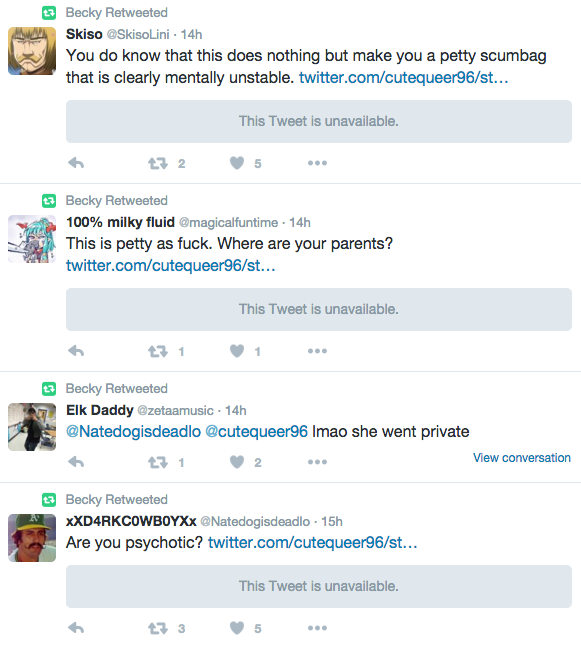 Becky told me that most of those people supporting her were complete strangers that she never interacted with before. 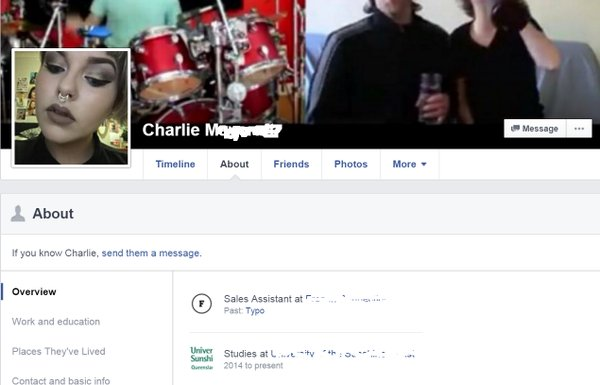 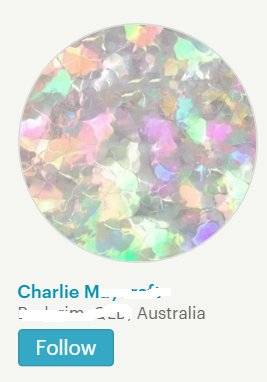 Some words of wisdom from an openly gay Twitter user as a reminder that sanity still exists in this world.

Morale of the story: it doesn’t matter what sex, race, orientation or gender that people identify as, people are people and people tend to be stupid when given the opportunity to be. If you’re going to express any kind of opinion online in a public forum, there is bound to be someone that disagrees. Some people can handle disagreement in a civilized manner while others will go Full McIntosh. You never know who you’re dealing with.

If even a fraction of the time spent by schools teaching kids about feminism, gender acceptance, consent and rape was dedicated to educating young minds on basic online safety precautions (common sense), situations like this would arise less frequently.

It sounds hypocritical of me to mention the last one after criticizing Charlie’s Angels for doing it, but I still stand by it nonetheless. They could have blocked Becky instead of escalating the petty argument needlessly and going for scorched earth.