The last time we talked about Sarah “Butts” Nyberg (@srhbutts), she was working for Leigh Alexander’s Offworld. Well, perhaps working. Who knows if that lush Leigh actually paid the degenerate. But, the fact remains: Ms. Alexander featured a self-proclaimed pedophile on her site without any hesitation whatsoever. That’s just one of Leigh’s mishaps over the last year, and we’ll be covering those in more detail on YouTube soon. But this post is about Nyberg. What has the dog-fancier been up to lately? Well, the creepo is still trying to shut down all dissent on Twitter, like a true fascist piece of trash.

As I’ve told you before, Sarah actually had my site shut down for a very short time last December. Ever since then, I knew she would be willing to do anything to silence her enemies. Freedom of speech is not something that enters that demented mind. I’m not the only one who has been targeted. Check out what Nyberg has been doing to Encyclopedia Dramatica, the controversial website that hosts a humorous profile of yours truly. The thing is, about 30% of that article is false. I was never an SJW, and definitely had no underage girlfriend. But you don’t see me talking about having the site taken down. It’s satire mixed with truth. It’s meant to be funny. If you know how to read it, the site is pretty informative as well. They also have a knack for outing pedos, freaks, and whatever sick past their subjects have. Srhbutts would prefer to keep her disgusting past off Twitter, of course, and so attacks were launched against the ED account, resulting in a takedown. 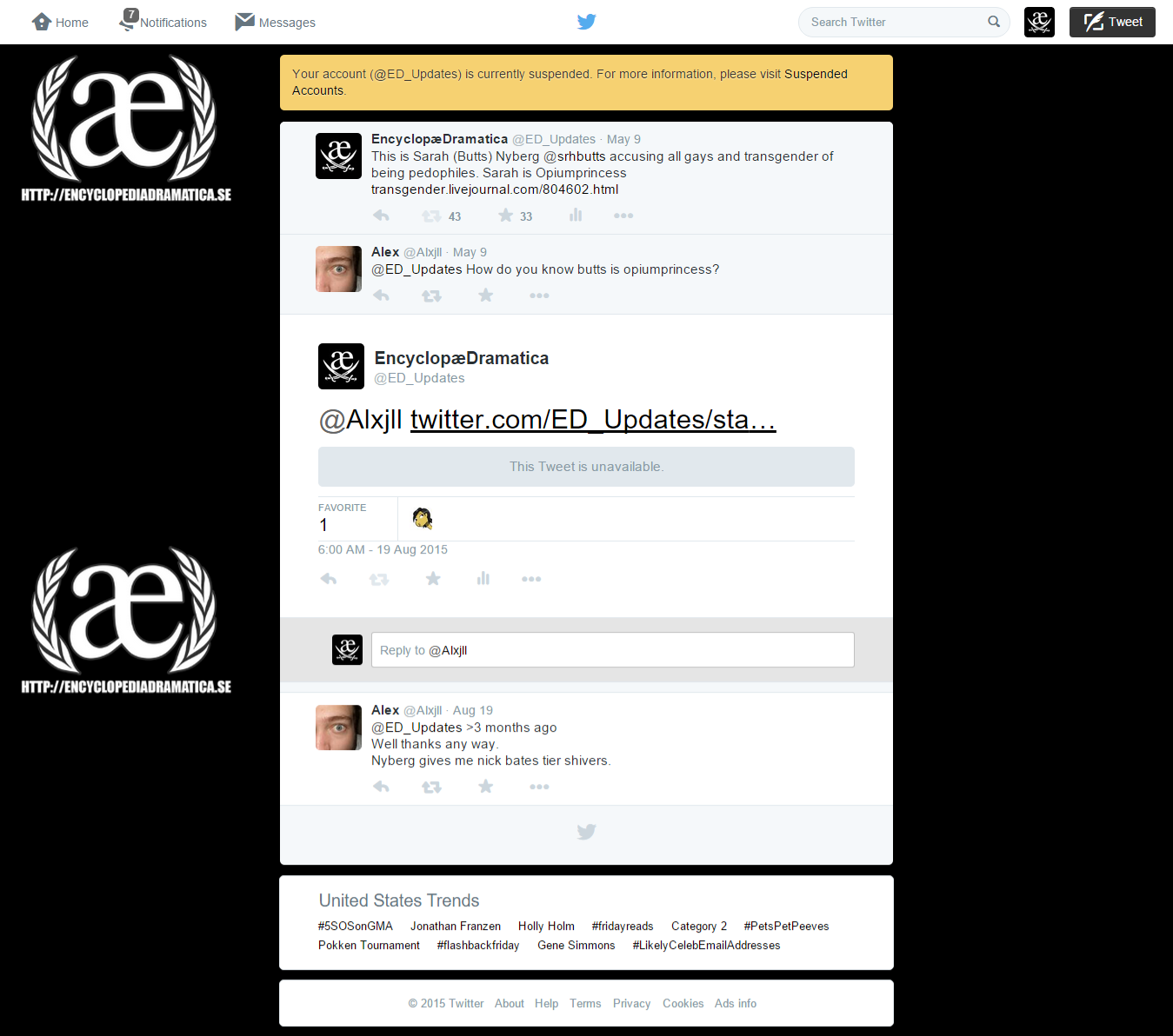 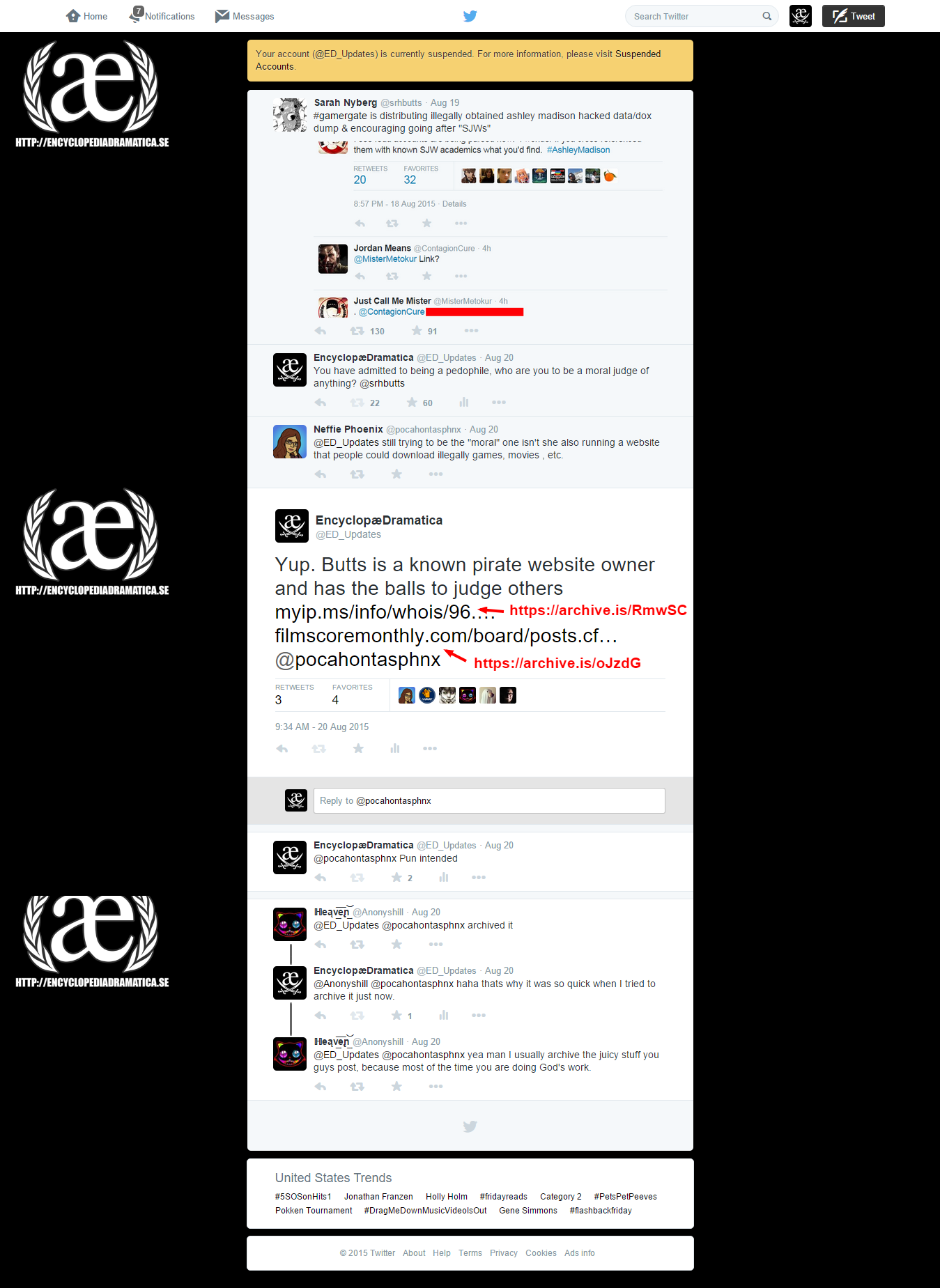 They have a new account now, but that’s not the point. It usually takes a good amount of time to build up 10,000+ followers. So getting set back to zero is a real headache for websites. That’s fucked up, but the bigger question is this: why does Twitter strive to make their site a safe space for sick fucks like Sarah Nyberg? Twitter Safety boss Del Harvey used to work for Perverted Justice, and had a starring role on To Catch a Predator. Now, she spends her days sheltering their delicate feelings on one of the world’s most popular social media sites. That’s quite a fall from grace.

Here’s something else that’s just as bad. They also made the ED Twitter account delete tweets that criticized some clown who goes by the name of Sibe. What’s his issue? Well, he thinks he shouldn’t have to tell his partners that he’s HIV positive. 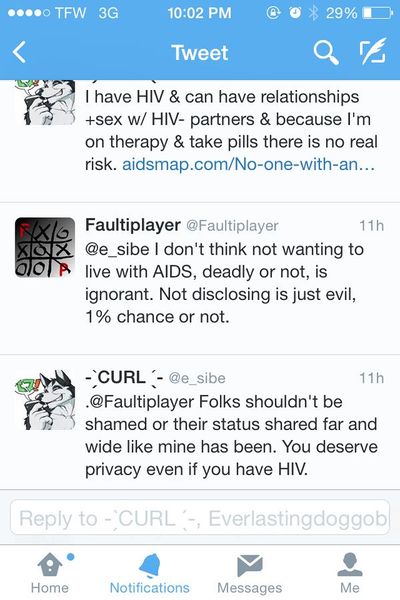 Fits right in with Butts, wouldn’t you say? This whole episode is rather disturbing. Twitter allows these nasty people to say whatever they want to about their opponents, but when people like me and the fine folks that run Encyclopedia Dramatica point out their disgusting pasts, we’re run off the service altogether. It’s just another example of how SJWs have one set of rules for everyone else, but they themselves are allowed to silence, bully, threaten and harass to achieve their agenda. It’s bullshit, and it needs to end.