In case you missed it, Stephen Fry was chased off Twitter last night by the same moral scolds and humorless husks that I rail against here on the site every single day. It really is quite pathetic that these losers are chasing away so many people, but such is the sad state of affairs. They did the same thing to Joss Whedon, who I didn’t like politically. Still, he’s another example of the poisonous and anti-comedic SJW culture that is threatening to destroy the entire service. It wouldn’t be so bad if they weren’t actually starting to gain real power, but alas, they are.

Some of you hate the BBC, and that’s fine. But they had a good write-up of the situation this morning that I want to show excerpts from before I get to Fry’s letter in its entirety…

Bafta show host Stephen Fry appears to have deleted his Twitter profile in the wake of his controversial comments during Sunday night’s show. Fry faced strong criticism online for comparing costume designer Jenny Beavan to a “bag lady” when she picked up her Bafta for Mad Max. Twitter users demanded Fry apologise for his comments over her clothes. But Fry, a prolific Twitter user, said online afterwards Beavan was “a dear friend” who had “got” the joke. The comedian and broadcaster underlined the point by posting a photo of the pair at the Bafta after-party. He wrote: “Jenny Baglady Beavan and Stephen Outrageous Misogynist Swine Fry at the after party.” 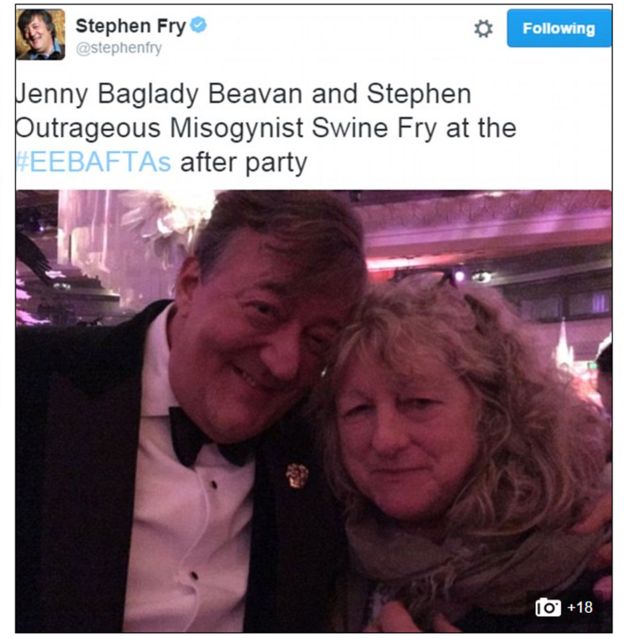 As you can see, the two are good friends. I know the idiots on Twitter who get their panties in a bunch over jokes can’t understand this, but sometimes friends rib each other. These ideologues think they know everything, though. Fry was making fun of himself during the BAFTA broadcast as well. Get a grip, people. They don’t want to act reasonable, though. It’s much easier to extract money out of people when you act like a rad fem loon. Grievance warriors are the ones who get all the attention, well, unless you’re someone with actual talent, like Fry. These useless scumbags hate him for his skill, by the way. They know they could never light up a room like this guy. So they sit in front of their computers and look for imagined sleights to whine about all day.

I was gonna excerpt some of Fry’s letter when I first sat down to write this, but it’s so important that I’m just going to reprint the whole thing. You can of course go to his site and read it there as well if you’d like. It’s so potent that I think it should be spread as far and as wide as possible…

It’s no big deal – as it shouldn’t be. But yes, for anyone interested I have indeed deactivated my Twitter account. I’ve ‘left’ Twitter before, of course: many people have time off from it whether they are in the public eye or not. Think of it as not much more than leaving a room. I like to believe I haven’t slammed the door, much less stalked off in a huff throwing my toys out of the pram as I go or however one should phrase it. It’s quite simple really: the room had started to smell. Really quite bad.

Oh goodness, what fun Twitter was in the early days, a secret bathing-pool in a magical glade in an enchanted forest. It was glorious ‘to turn as swimmers into cleanness leaping.’ We frolicked and water-bombed and sometimes, in the moonlight, skinny-dipped. We chattered and laughed and put the world to rights and shared thoughts sacred, silly and profane. But now the pool is stagnant. It is frothy with scum, clogged with weeds and littered with broken glass, sharp rocks and slimy rubbish. If you don’t watch yourself, with every move you’ll end up being gashed, broken, bruised or contused. Even if you negotiate the sharp rocks you’ll soon feel that too many people have peed in the pool for you to want to swim there any more. The fun is over.

To leave that metaphor, let us grieve at what Twitter has become. A stalking ground for the sanctimoniously self-righteous who love to second-guess, to leap to conclusions and be offended – worse, to be offended on behalf of others they do not even know. It’s as nasty and unwholesome a characteristic as can be imagined. It doesn’t matter whether they think they’re defending women, men, transgender people, Muslims, humanists … the ghastliness is absolutely the same. It makes sensible people want to take an absolutely opposite point of view. I’ve heard people shriek their secularism in such a way as to make me want instantly to become an evangelical Christian.

But Stephen, these foul people are a minority! Indeed they are. But I would contend that just one turd in a reservoir is enough to persuade one not to drink from it. 99.9% of the water may be excrement free, but that doesn’t help. With Twitter, for me at least, the tipping point has been reached and the pollution of the service is now just too much.

But you’ve let the trolls and nasties win! If everyone did what you did, Stephen, the slab-faced dictators of tone and humour would have the place to themselves. Well, yes and they’re welcome to it. Perhaps then they’ll have nothing to smell but their own smell.

So I don’t feel anything today other than massive relief, like a boulder rolling off my chest. I am free, free at last.

Amazing stuff. It’s probably the best and most scathing critique of the current SJW culture on Twitter that I’ve ever seen. I imagine he wrote it up in less than an hour. That’s real talent. The people criticizing him over a playful joke couldn’t put out something of equal quality if you gave them all week. I think you can all see why they are so jealous of him and others who possess real talent. We’ll miss you on Twitter, Mr. Fry. What a way to go out, though.