I love being proven right. It usually happens in the end, but rarely does the truth come out quite this spectacularly. A guy named John Sweeney, who used to go by the name of “Scrumpmonkey” on Twitter, just accused one of the most beloved GamerGate supporters of all time of plagiarism. I’m speaking about Lizzy Finnegan, of course, and the only reason I bring up GamerGate in this context is because the offences supposedly happened back when she was a full-throated GamerGate supporter.

There’s only one problem with all of this, though. Sweeney had zero proof whatsoever when he went public with this sensationalist allegation. This is what you call jumping the gun, ladies and gentlemen. Actually, it looks to me like he was just spreading completely unsubstantiated bullshit in order to drive clicks to his pathetic site, Super Nerd Land. That’s just my opinion, though. I’ll leave it up to you all to decide the truth of the matter.

Here’s the original allegation, which has now been deleted. Not only that, the guy who he claimed ghostwrote Lizzy’s articles has deleted his entire account and is nowhere to be found: 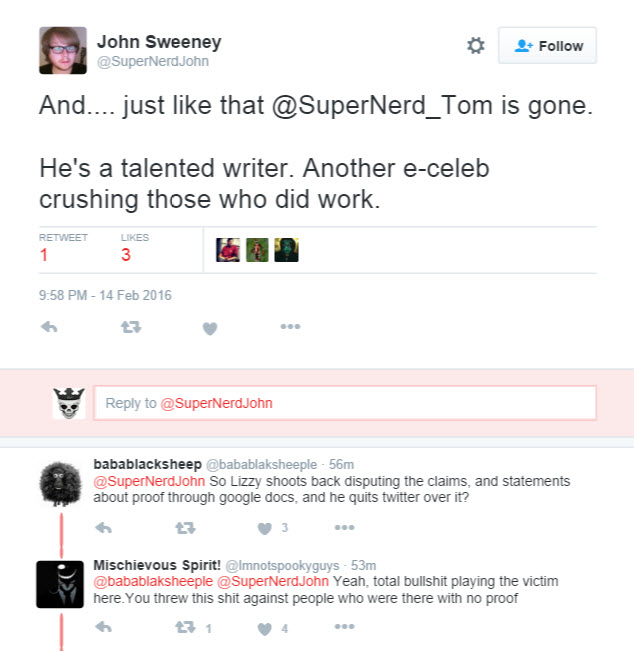 More, from the full thread. The man in yellow is the one making the allegations, which were then trumpeted by Super Nerd Land’s Sweeney. That doesn’t sound very ethical, does it?: 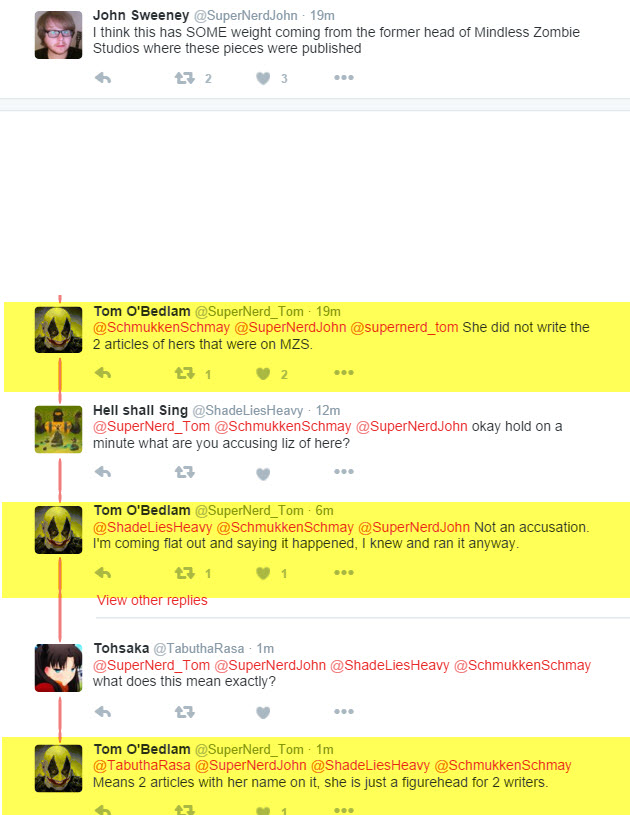 Keep in mind, Sweeney is the same clown who has routinely accused me and this site in general of being unethical. I write in a certain way and I do cover drama. But I flatly reject any and all claims that I haven’t been above board. You know what is shady, though? Accusing Liz Finnegan, who has a pretty spotless record, of being a plagiarist without any hard evidence. Not only is out-of-bounds, it’s also really, really stupid. Of course stupidity is par for the course for Sweeney, which is why no one reads him.

As a result of all this, I reached out to Ms. Finnegan personally for a comment. Here’s what she had to say to me…

Everything I’ve ever written has been done in Google Docs, which shows dates, who created it, all additions and edits as they’re done and who’s done them. Also note that the Twitter account accusing me was deleted as soon as I said all that publicly.

Yes, I did note that. That’s a really solid case you have there, Mr. Sweeney! Any thoughts on the Abominable Snowman or the Loch Ness Monster while we’re here? Perhaps you know who really killed Kennedy as well? Talk about disgraceful. If you or Super Nerd Land had any decency, we’d never see your byline there again. We know know you guys don’t, though, so I won’t be holding my breath for you to do the right thing and resign your post.