Thanks, Breitbart. We’re All Laughing at Liquored Up Leigh Alexander Now.

I got an email this morning from Allum Bokhari asking if he could use my logo on an article he was doing about Leigh Alexander and her decline over the last year. When we started GamerGate, she said: “I am game journalism.” Now, she’s a drunken shell of her former self. Well, she was a drunk then too, but at least she was sitting on a higher perch. Now, she’s a laughingstock who’s getting her ass kicked by your’s truly. I guess that’s appropriate, since I was the one who originally took her down a peg. 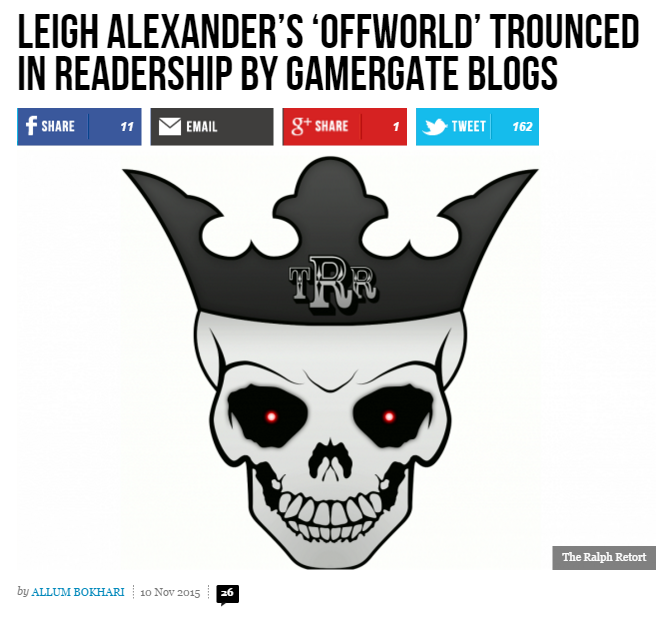 I’ll let Allum take it from here, then I have some things to say about why I’m not completely happy with my status…

Even lone bloggers are doing better than Leigh Alexander’s site. The Ralph Retort, the personal blog of GamerGate supporter Ethan Ralph, receives approximately 230,000 visits a month, with visitors spending an average of 1.49 minutes on the blog.

Don’t get me wrong, I’m very happy to be stomping a mudhole in Leigh’s big ass (before walking it dry). But, I used to be 70,000+ spots higher in the worldwide ranking, before I slacked off. I’m still in the top 60,000 in the United States, but it does piss me off a lot. I know this site should be sitting even prettier. That’s one reason I’ve pressed along with the redesign, done more work on YouTube, and continued looking for ways to improve and expand. Still, even if I forever stay at this level, it’s still been such an enjoyable ride. Plus, the first SJW I ever laid out is now passed out drunk somewhere wondering where it all went wrong. Well, I can tell you that, Leigh. The day you pissed all over the consumer was the day you dug your own grave, darling.

Check me out over on Streamup here in a minute. A loyal viewer and I are going to stream the Republican Debate. I’ll see you guys in a bit.