I’m a political fiend, but admittedly I’m a bit more well read on United States politics than pretty much any other country. I guess that makes sense. This is my home, after all. Still, as many of you know from your time spent reading my rantings here on TRR, I follow global politics avidly as well. Jacob Zuma is being pressured in South Africa after a recent cabinet reshuffle. Nicolas Maduro is running Venezuela into the ground at a rapid rate. The real hope there, for me at least, is that he ends up swinging from a lamppost. Oh, and there’s an election in France on Sunday between Marine Le Pen and globalist stooge Emmanuel Macron.

But I’m not here to talk about any of that. Instead, I wanted to talk about my second favorite political scene, the United Kingdom. I think it’s their tabloids that have always drawn me to their culture. Also, I was sort of raised as an Anglophile. It was not uncommon to see my parents watching Are You Being Served?, Upstairs, Downstairs, Cracker, Masterpiece Theatre, or some other British classic on the local PBS station. I naturally came to love the culture myself through this early indoctrination.

Anyway, like I said, this isn’t about television…it’s about politics. In case you missed it, last night the Labour Party was absolutely destroyed in local elections across the UK.

Labour is licking its wounds after being stripped of more than 300 seats in local elections and losing control of Glasgow for the first time in 40 years.

Jeremy Corbyn’s allies admitted it had been a “tough” night, but despite the rout still pointed to results in Wales and elsewhere which they said showed there had been some positives.

Oh, things got much, much worse as the results continued to come in.

That last bit is probably the most ludicrous bit of spinning that I’ve heard all year. There are zero positives for Labour after last night. The only silver lining is that these were local elections and not the general. But there’s only 34 days or so to go, and they are on track to get obliterated. There’s a decent chance they fall below 150 seats in Parliament. 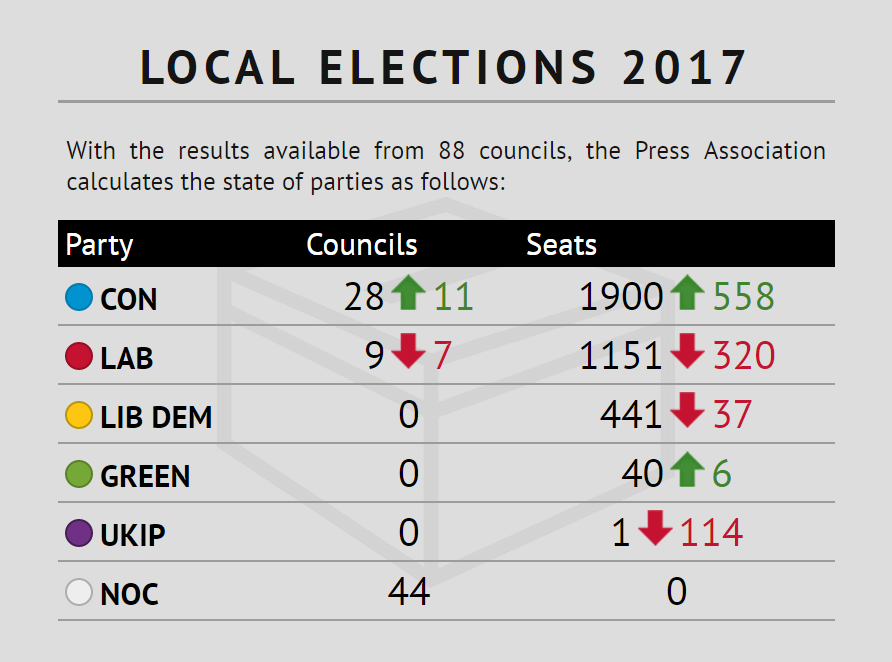 The Tories could be sitting on 400 seats for 5 more years, which would allow Prime Minister Theresa May to do pretty much whatever she wants, so long as she keeps power within her own caucus. Given her deft handling of the wheel since taking up residence at Number 10, I would say it’s highly likely that she will be able to manage quite well going forward.

In my mind this is a generous projection for Labour.

But one reason she’s had such an easy time so far is Jeremy Corbyn. The guy is a complete disaster. The funniest part about it, though, is that his fellow Labour MPs know he’s a disaster and tried to get rid of him last year. That was a failure, but they knew what was headed down the pike if he stayed on as leader of the party. Things have only gotten more grim since the leadership challenge. It’s true that the mutiny against Corbyn probably made things worse in the long run, but it’s hard to blame the people who tried to take him down (except for the comically inept way that was done). And it’s fair to note that most parliamentary leaders would have went ahead and stepped aside when 172 colleagues vote for their removal and only 40 stand by and vote to keep them.

With that refusal, Corbyn proved that he is completely beyond shame. In fact, I’m not sure an electoral drubbing on June 8th will convince him to step down, either. I think there’s a 50% chance he tries to hang on even then. That’s why I know there’s zero chance he will take the unsolicited advice I’m about to give him. I’m going to impart this wisdom anyway, however.

The one thing Jeremy Corbyn could do between now and election day to improve the Labour Party’s chances would be to step down and let someone else lead it before he drives them over the cliff. Don’t get me wrong, that person will most likely lose as well, probably even badly. But I think a more palatable and competent leader would at least lose less badly.

It’s never going to happen, but if he truly wanted to help his party and avoid an immense embarrassment, he would resign immediately.