The new Black Panther movie has gotten so much praise that you would think it’s a film on par with the all-time greats, classics like The Godfather, Citizen Kane, The Shawshank Redemption, etc. I mean, maybe it is, but I somehow doubt it. I’m not saying I will never see it, mind you. I most likely will, although I’ll wait until I can watch it without having to pay for a full priced ticket to the cinema. In fact, I’ll most likely wait until I don’t have to pay at all, to be quite honest with you. But what I’m saying is, I don’t really have anything against the movie. Still, the media hype machine has kicked into such overdrive that it’s making me sour on the project.

The other thing that’s making me turn my nose up at Black Panther is the way progressives loons are acting about the whole thing. I’ve seen plenty of cringeworthy takes over the last couple weeks, but the one that came across my feed yesterday pretty much takes the cake. This is a real tweet, mind you. It isn’t photoshopped. 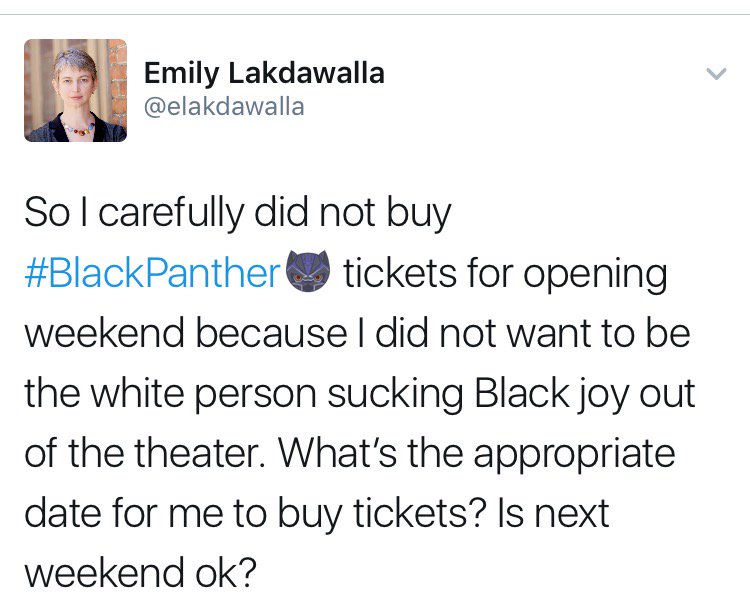 “…I did not want to be the white person sucking Black joy out of the theater. What’s the appropriate date for me to buy tickets?”

(As someone on Twitter noted, what’s the over/under on how much Black joy Ms. Lakdawalla has already sucked out?)

What kind of person thinks like this? Any non-crazy black person, upon reading this, would say, “This white bitch is crazy.” I know that was my first thought.

Yea, you definitely should have known better. After reading your online bio, though, I can’t say I’m surprised that you did not.

Emily Stewart Lakdawalla (born February 8, 1975) is Senior Editor of The Planetary Society, contributing as both a science writer and a blogger. She has also worked as a teacher and as an environmental consultant. She has performed research work in geology, Mars topography, and science communication and education. Lakdawalla is a science advocate on various social media platforms, interacting with space professionals and enthusiasts on Facebook, Google+, and Twitter. She has appeared on NPR, BBC, and other media outlets discussing planetary science and space exploration.

That seems innocuous enough, at first. But when you dig deeper into The Planetary Society, you see who actually runs it. Namely, Bill Nye the “My Sex Junk” guy. So, in case the tweet above didn’t make her left wing lunacy obvious enough, I think this association brings it into sharper focus.

Today's mood. For those of you who've done this before*, what's most effective? Sit down for an hour and block once or twice or a little here and there all day long? (please DM rather than reply so you don't get hit by shrapnel)

*question not intended for people who haven't pic.twitter.com/AIRawrl4mr

Her poor, poor, mentions! Talk about white privilege. Imagine being stuck up enough to complain about Twitter backlash while their are marginalized People of Color ™ suffering daily. Emily, you should really check yourself and reevaluate your life. Maybe you can make up for it by wasting some money on a bullshit prog “charity,” or something. Just go ask DeRay, I’m sure he can tell you who to make the check out to.