I’ve decided to finally do a big post on washed up former NFL punter Chris Kluwe. He’s no doubt made a tidy sum for being the biggest pussy on the team year after year. But yet he still acts like he’s miserable. Personally, I would be enjoying retirement and traveling the world, but this asshole is trolling on the Internet instead. Maybe he wasted all that money on sex tourism and hard drugs over the years. That would make his desperate attempt at becoming a talking head a little more understandable. Another explanation is that he has at least a touch of psychosis.

But when you think about it further, you can see that he’s trying to make a second career for himself as a SJW/”progressive” mouthpiece (Kluwe actually started this while he was still playing). He sees how well it pays, and since he’s a huge asshole who has no use for the truth, this ordinarily would be a viable career path for someone like him. There’s only two problems: he frequently gets his ass handed to him, and he’s a dumbass football player..

As Mike Cernovich explained over on Crime & Federalism, Kluweless got his head kicked in by the ever classy and beautiful Mercedes Carrera:

Second, I knew Kluwe would treat Mercedes with utter disdain in a debate. He did not disappoint. Chris didn’t wash his clothes, comb his hair, or even listen to Mercedes. The debate was a debacle for Kluwe. He attempted to bully her, like the pig he is.

Rather than address her with respect, which should be done regardless of the gender of your opponent, he threw tantrums, lied, and mocked Mercedes.

Third, I knew Mercedes would destroy Kluwe, which she did. I’ve spoken with her enough to know how smart she is. Underestimate Mercedes at your own risk. Chris looked terrible. Watch this video to see a sexist pig get spit roasted.

Well, why not? Here’s the video for those that missed the can of whoop ass Mercedes opened up (yes, I just channeled Steve Austin):

Kluwe actually thinks he can make a living with a performance like that? Mercedes looks like she could be an effective advocate for almost anything. Krack Baby comes off like an immature jerk who’s disrespectful to women. Putting his intellect up against hers is like bringing a knife to a gun fight.

But this wasn’t the first time this scumbag has popped off. Let’s refresh everyone with his HILARIOUS JOKES about child rape: 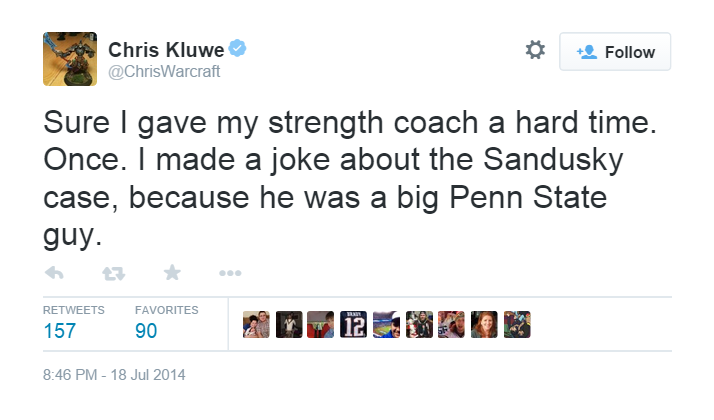 High comedy indeed. What about his thoughts on TotalBiscuit? 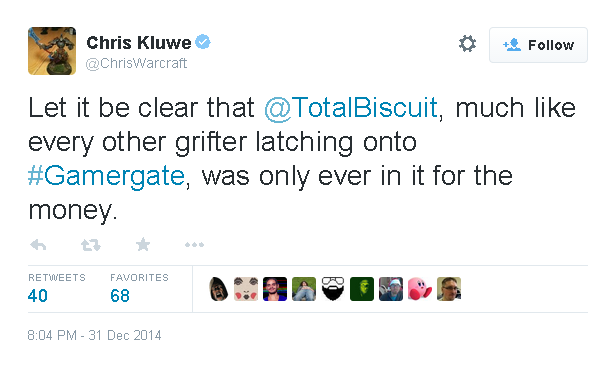 There you go projecting again, Chris. Just because you’re a money-grubbing bottom-feeder doesn’t mean everyone else is. Speaking of Kluwe’s nastiness:

This is the guy who wants to condemn GamerGate? He cracks jokes about the Penn State rapes, trashes a cancer-stricken guy with no evidence, and wishes “dick cancer” on people. He’s like Randi Harper‘s eternal soulmate.

Oh, and just in case you forgot, he also threatened the Minnesota Vikings with going public about some underage sex he knew about on the team. I don’t even know what to say there. You could go any number of ways with it, but I just know that only a person who was sick in the head would even consider using that info as a bargaining chip. That’s exactly what he did, by the way. He can’t even talk about this now that accepted his payoff from the Vikings. 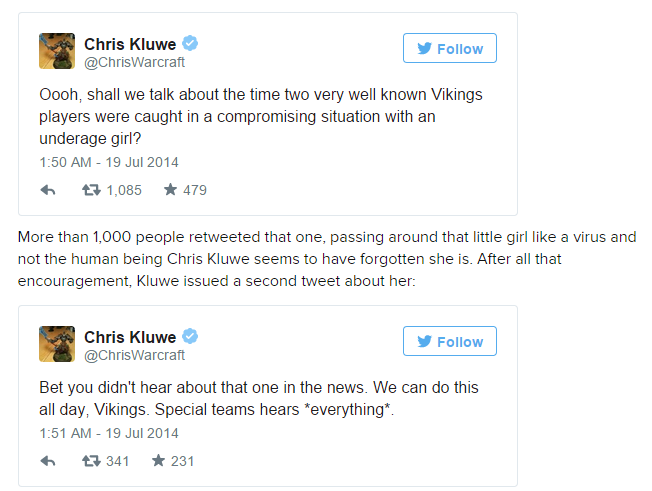 How’s the little girl, Chris Kluwe? You know — the “underage girl” who was “caught in a compromising position” with “two very well known Vikings.”

Chris Kluwe, it turns out, is the very thing he claims to hate: a jerk who traffics in cruel humor, homophobic jokes and look-the-other-way cowardice when the mood strikes. Now that he has been outed as such — and has outed himself with his own words on Twitter — he has sacrificed his position of bighearted moral crusader.

Do her parents know what happened to her, or is that not your concern? Maybe that girl is just like all those little boys who were raped by Jerry Sandusky — not your concern beyond being the punch line to a joke, or the hook to an edgy tweet, as you used that little girl on Friday night right here.

Sometimes I ask myself: where did the other side find such a crop of miscreants and dishonest snakes? Then I remember the cultist ideology and easy money they’re able to scam off gullible idiots. It’s not that complicated, at the end of the day.

Anyway, here’s some more greatest hits from the collection, starting with him saying GamerGate is “literally the KKK”:

This one is where he trashed Mark Kern just a few weeks after acting friendly in a face-to-face sitdown. This is what you call being a complete pussy. 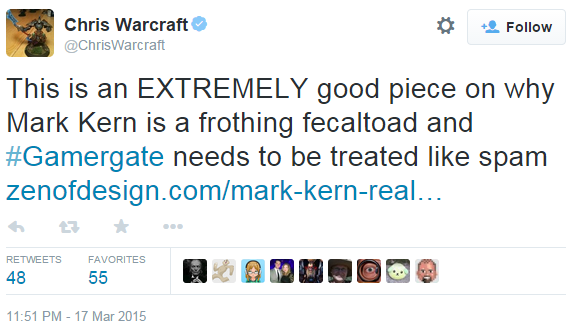 Oh, and after the debate he used a racial slur against Mercedes. So he’s a sore ass loser on top of everything else. No class, no dignity. 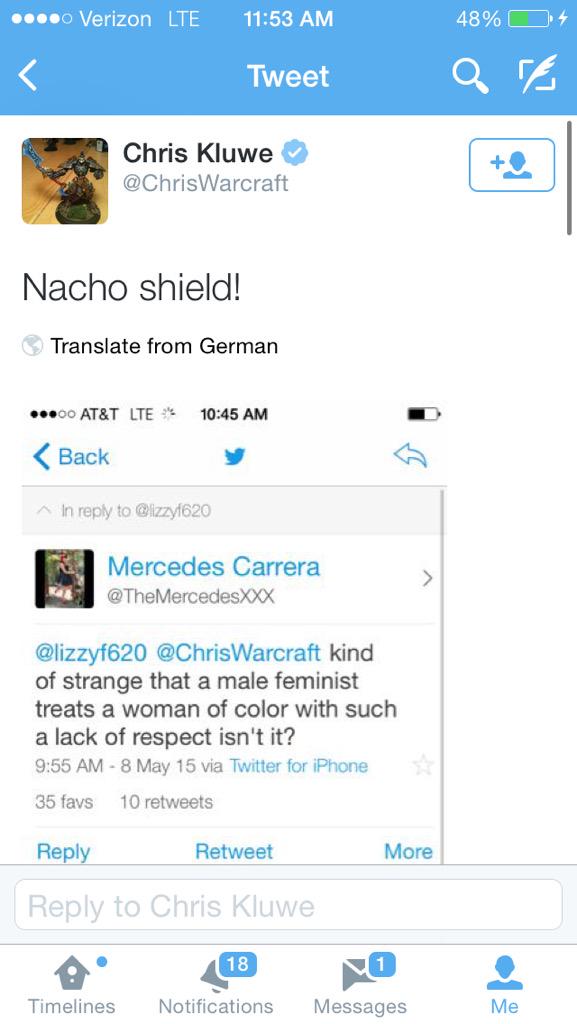 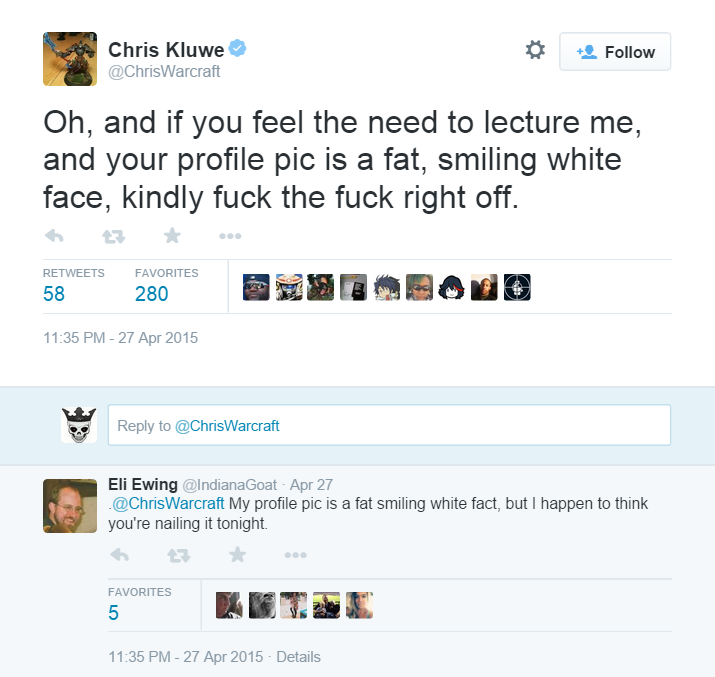 Here’s a few more loose end from the Krack Baby archives, beginning with his attack on the Sad Puppies slate: 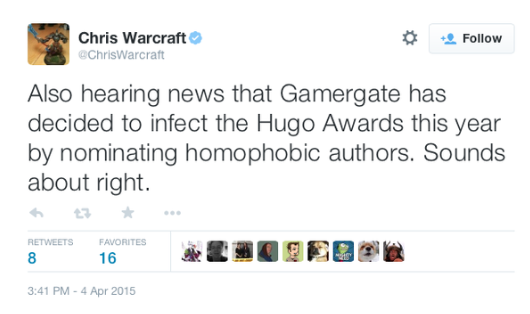 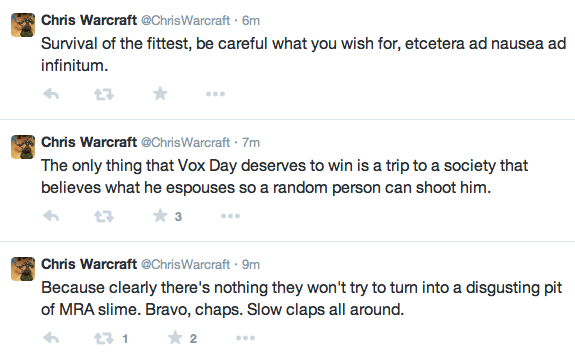 Getting rekt by Milo haha: 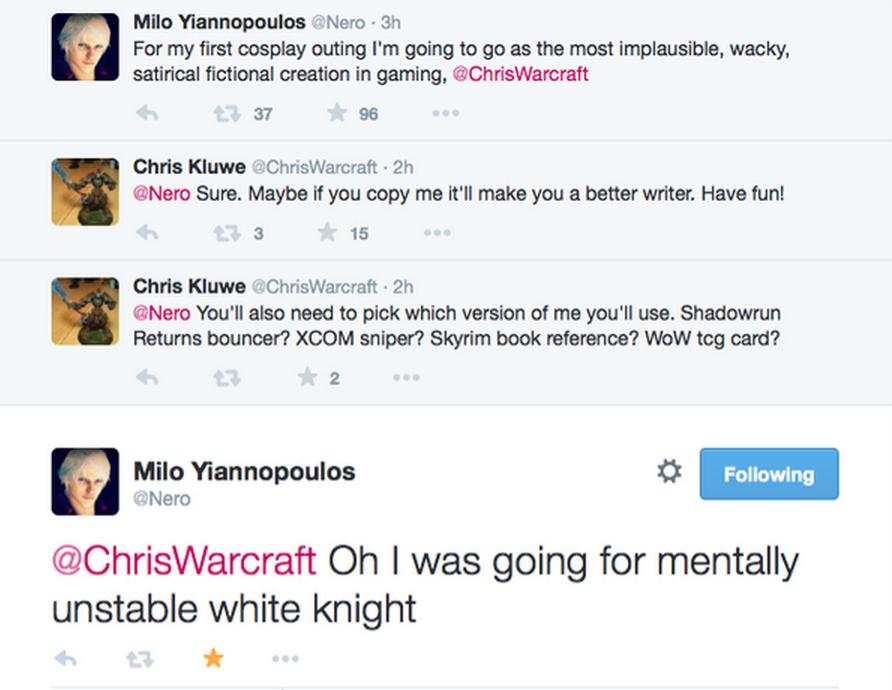 Here he is talking some bizarre nonsense about IRC piracy making you a real nerd (fun fact: I used to download there all the time, but no one cares. Same for Kluwe). 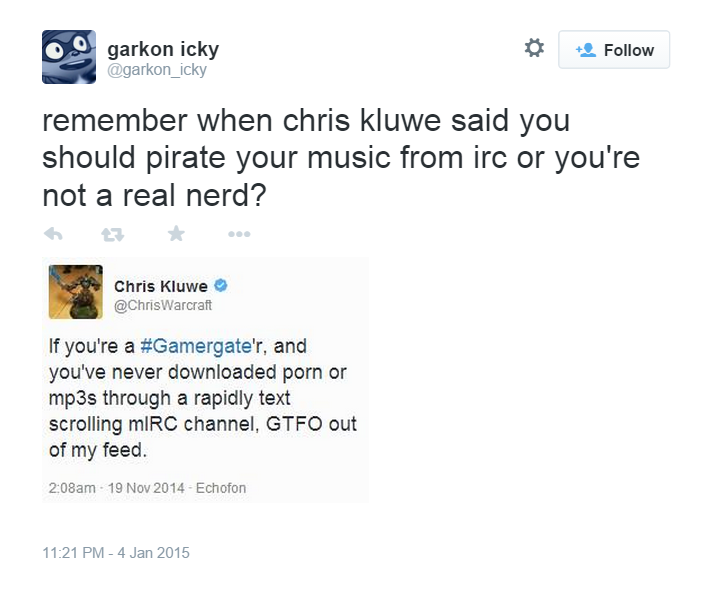 I wonder what they would say to a GamerGate supporter who made jokes about beating his kids. You think they would cut them some slack? I doubt it. Kluwe’s on the hook for that as well. It never ends with this guy. 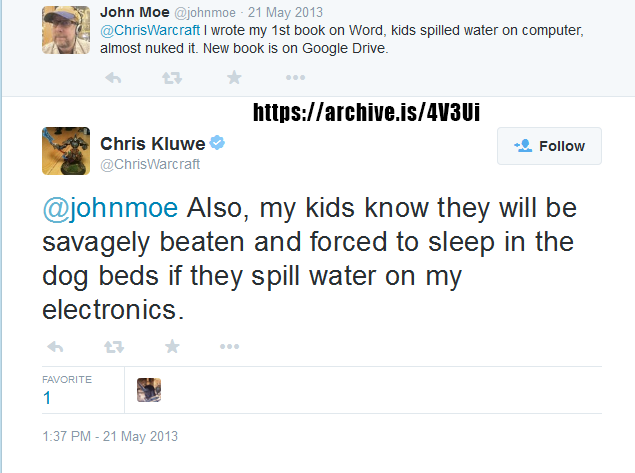 I’m probably left some shit out, but I’m still gonna call it definitive, because that sounds cooler. I’d say it’s pretty thorough either way. If you have more, feel free to it down below. I’m about to go try to knock out another post before naptime. Kluwe, you’re complete trash and I hope you saved your NFL money, shitbird. You’re going to need it. I don’t see this second career panning out for you.