Once again leftist agitators and SJWs prove themselves to be reactionary drones who are completely incapable of self-analysis. If they had the ability to logically examine their various viewpoints on culture and immigration they might be able to see how incompatible they are; but they don’t have that capacity for rational thought as they are too busy seeking safe spaces from chalk and crying about white kids wearing dreadlocks.

But let’s think about this particular stance for a minute since this is far from the first instance of someone screaming “cultural appropriation” on a college campus. Last week it was the hysterical ravings of an unhinged student accosting a white kid over his predilection for dreadlocks but in December at Oberlin college it was the food itself that was racist. In fact, a student at the SJW Training Camp known as Oberlin said “If people not from that heritage take food, modify it and serve it as ‘authentic,’ it is appropriative.”

Upon closer examination, however, this term “cultural appropriation” which was invented by leftist college professors who presumably discovered one day they had nothing left to be offended by and had to rectify the situation, makes little sense when held up next to their other musings on diversity.

One of the most repeated phrases on college campuses for the past decade has been “multiculturalism” and how important it is to embrace that concept. But what does that imply? Does it not imply that different cultures will gather in the same country (or campus) and blend together? For decades the left has been lecturing the rest of the country that we’re all part of a fabulous patchwork quilt of cultures and endlessly bleating “our strength is in our differences”. Whatever analogy they use, patchwork quilt or melting pot, the implication is the same: differing cultures can and should interact with one another thereby allowing the best parts of the various cultures to be shared with the others, making the whole much stronger. A literal melting pot. But what happens when you melt ingredients in a pot? Do they not blend together? A soup is a soup, it’s no longer the individual components of chicken, celery, carrots and noodles. Why is a cultural melting pot any different?

While telling the world that no amount of immigration is too much immigration, while lecturing the rest of us that borders are the result of an imperialistic culture that needs to go, the left has been actively encouraging the blending of cultures since the 60’s. But now it seems they have moved the goalpost. Instead of a fabulous melting pot made stronger by all the ingredients blending together to forge a whole new and stronger identity, now we are being told that taking the parts of other cultures that we enjoy, or that would ostensibly make us stronger as a whole, is terribly wrong. This is a contradiction so obvious that it I have difficulty understanding how it is they don’t see it. 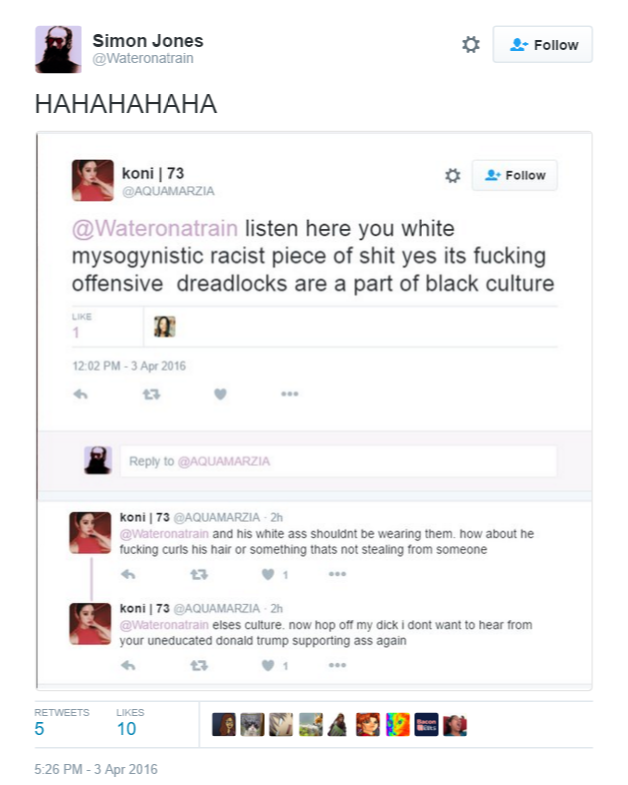 Something needs to give campus agitators: Do you want a melting pot or do you want all cultures to remain forever separate? And if, as you insist, no culture borrow from another, what is your master plan for having this hodgepodge mixture assimilate into one functional society?

The questions don’t even end there. Which cultures are protected, dear campus radicals, and which can be appropriated at will? If the white kid with the dreadlocks had accosted the young black woman for listening to classic southern rock music and screamed something about stealing his culture, would you rush to his defense? I think not.

When it comes to issues of culture the far left has become not unlike a toddler who has been pointing at a dropped toy and who, once given the desired object, throws it to the ground and beings pointing at another toy. You can not have the Utopian blended society that you have been after for decades without actually allowing any, you know, blending. If this is the issue you really think you can lead on, that you passionately believe can change the world, then your most important objective must be to stop sending conflicting signals. What is it you want, the fabulous melting pot of soup or all the ingredients laying side by side on the counter unchanged by one another? When you figure it out let the rest of us know.