The Mary Sue Strangely Denies Srhbutts Ever Wrote There (UPDATE)

Someone sent me a direct message on Twitter earlier. It said:

“Did you get a response from The Mary Sue about the dog fucker?”

I told them no, I had not. Not long after, I was alerted to a tweet from their official account. I guess they finally decided to respond, after a couple weeks of constantly being asked about it by myself, and others. Like McIntosh, they think we’re stupid. Even though Sarah Nyberg (Sarah Butts, srhbutts) looks to have written numerous articles for them, they flat out denied that she had ever had earlier this afternoon. They gave no explanation as to who was the “mystery” Sarah Butts (who posted three articles on their site, all about GamerGate).

I went back and looked at some tweets, and found that Srhbutts didn’t deny writing for The Mary Sue until around December. Here is Trevor Trust flat out saying it’s her writing, and she doesn’t deny it. 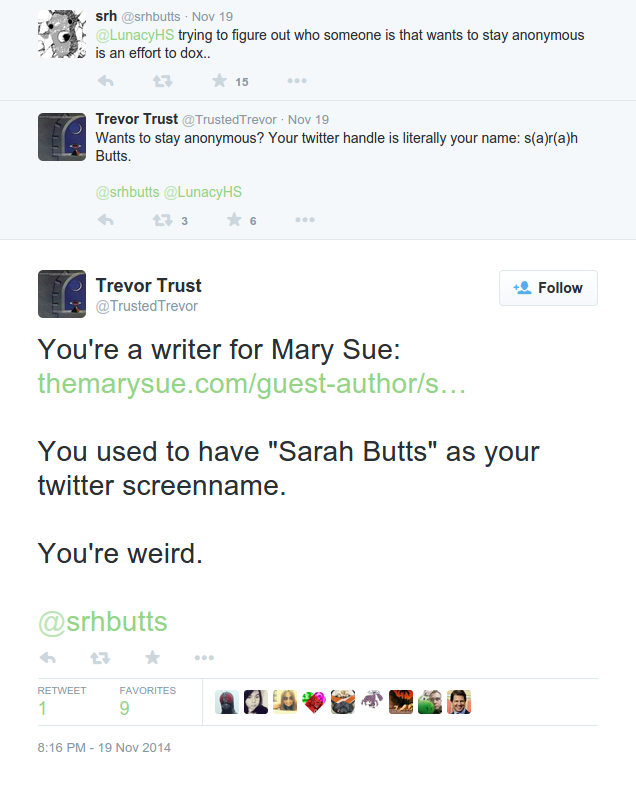 She didn’t say anything here, either. The first time I saw her deny it, was on December 6th. There just seems to be way too many coincidences here. Why has this Sarah Butts never written anything else for the site? It just doesn’t add up, and I’m not inclined to give frauds and sickos the benefit of the doubt. Maybe if they can offer up more in the way of proof, I would change my mind. But as of now, I think Sarah Nyberg (AKA: Srhbutts, Sarah Butts) is the one who wrote those articles.

It’s understandable why The Mary Sue would want to distance themselves from Butts. You don’t see people as depraved as her every day. I guess maybe some of their investors were put off by stuff pedophilia and bestiality. Those usually don’t inspire investment:

#BasedCommentSection reminds you what @Tehdoh was talking about earlier. Sick Sarah at it again. #GamerGate pic.twitter.com/zNH7a06ucq

#BasedCommentSection reminds you what @Tehdoh was talking about earlier. Sick Sarah at it again. #GamerGate pic.twitter.com/zNH7a06ucq

It’s time to either come clean or admit that you let a nasty motherfucker like Srhbutts write for your shitty site. As of now, no one is buying your claim.