When I first read about a supposed conspiracy to fundamentally alter gaming, I was a bit incredulous. I knew that radical feminist activists, such as Anita Sarkeesian, had gained some prominence. But I didn’t view it as an organized movement. Over the course of GamerGate, however, I’ve come to realize that it’s actually much more vast than I had imagined. While it may not be an explicitly coordinated plot, there is strong evidence to suggest collusion among journalists, developers, and industry insiders. They aim to enforce their  warped ideas on gender and culture onto everyone by decree (without real debate, of course). They would argue that this is for the benefit of the medium. I, and many others, find that to be absolutely ludicrous.

Despite the denials of people like Jenn Frank, they are explicitly involved in what I’m now going to call the Silverstring Agenda. Frank she does a good job of masking her radicalism, but she let it slip in her Guardian op-ed. She repeatedly claims that piece was neutral, when anyone can read it and see that it’s heavily slanted towards one side. In the screen below, Silverstring explicitly promotes Frank, and a whole slew of other enemies of GamerGate, as people who could be trusted to spin the narrative towards Sliverstring’s preferred direction: 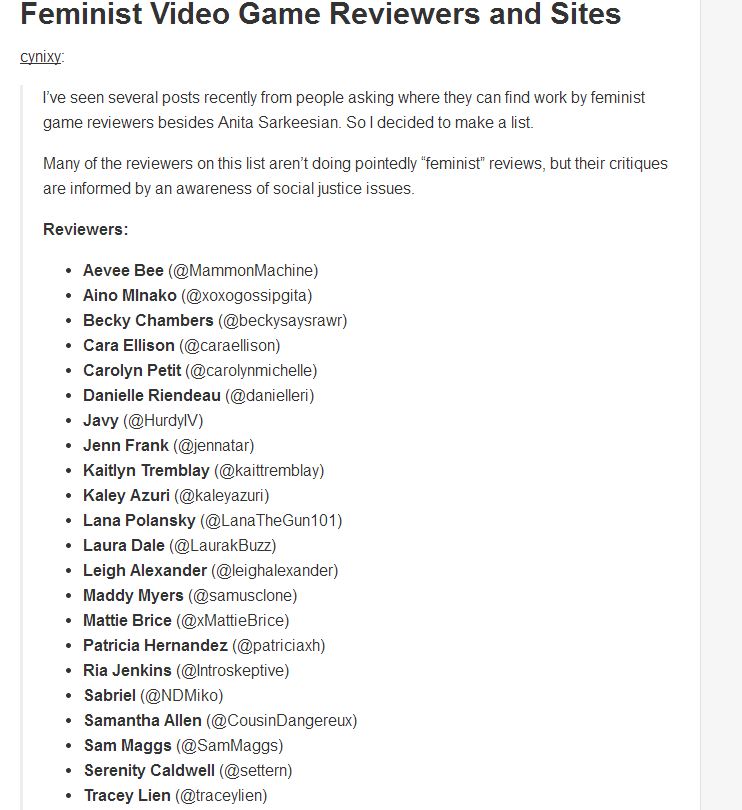 There are many names that stick out on that list, but the one that really sticks out, is Samantha Allen. She’s virulently anti-male, going as far as to publicly declare herself a misandrist.  If these are the people Silverstring is comfortable supporting in public, I can only imagine what kind of private support they hold. I also wonder how many others on this list hold the same kinds of extremist views. You can say one thing for them: they at least possess enough intelligence not to put their man-hatred on record.

Ask yourself why so many radical feminists hold positions of prominence within the pantheon of gaming journalism. While there are radical feminists who write about all sorts of things, no one takes them as serious as the video game industry seems to. You don’t see Hollywood giving a shit about what this crowd says, so why should we? There also seems to be a much higher percentage of video game writers who hold extremist feminist views, when compared to film, TV, or politics.

This can partially be attributed to the lack of prominent outlets for vidya writing, but that’s not the only cause. For years, there has been a concerted effort by the Silverstring types to install these people into positions of prominence. But they don’t just want them featured. The Agenda wants us silenced as well. That’s why debate is quashed, discussions are closed, and those who disagree are exiled and shunned. They even shit on their paying customers.

And what exactly is it they want to do to gaming? Why have they focused so much attention where it isn’t even warranted? Gaming is not trans-phobic, and gaming is not anti-woman. That’s who they claim they’re fighting for. In reality, they’re fighting for their own bank account. Women have made games for years, and have always had prominent representation in the art. The things they talk about, either I’ve never witnessed, or it’s exaggerated to such an extreme as to be laughable. Scenarios such as being forced out of your home over scary tweets, while at the same time sitting on Twitter and cracking wise about the “nerds” and “Destiny killed GamerGate,” do not make sense. You always seem to get the sickening feeling that these people have a long distant relationship with the truth.

I reject their contention that vidya is an industry ripe with misogyny. In fact, I would argue that gaming is much more progressive than music or Hollywood. Yet, they focus on the gamers. The reason is, they think they can beat us. They’ve already gotten their asses handed to them by the movie and music moguls, who told them to go fuck themselves. We simply have too many cowards in charge, sniveling, when they should be swinging. And if they aren’t cowards, they’ve already joined the SJW ranks, either out of sincere belief, or for career advancement.

And what of the journos, who are supposed to present both sides of the story, and give all parties a fair hearing? Half of them are in on the Silverstring Agenda themselves. They can’t police anyone or conduct themselves professionally, because the foundation of their own house is so rotten.

Here’s what passes for journalism these days: Journo and media donate to each other, give each other jobs, shout down anyone who disagrees with them, and still deny any problems. They take swag off companies, talk to each other on secret email lists where they decide the news, and fuck the subjects of their coverage. Afterwards, they say, “nothing to see here.” They have a ton of extremists in their ranks, but call GamerGate monsters. It baffles my mind how the mainstream media lets them get away with it, but it really shouldn’t. They’ve been shit my entire adult life, and have been actively dying for most of it. They mean nothing to gamers and our community You know who gamers listen to? Other gamers. We don’t have to accept their twisted spin. Reject it, and them.

The rejection won’t come easy, because the web is vast. It includes many well-known gaming journos. Including: Mattie Brice, Ian Miles Cheong, Brendan Keogh, Patricia Hernandez, and Ben Kuchera.  Alex Lifschitz, the boyfriend of Zoe Quinn, sits around an whines about GTA 5 like a braindead idiot, and contributes nothing of any substance, but he’s there too. Anthony Burch of Gearbox…basically, almost all the loudest critics of GamerGate are members of this Silverstring movement, including Anita Sarkeesian, who used to consult for them. They all have friends in the mainstream media who don’t give a shit about games, but who do love to cut “misogynist neckbeards” down to size. Gamers are already a minority that the mainstream loves to attack. This operation isn’t as difficult as it may sound, although it does take rabid persistence. It has also been assisted by the unawareness of the gaming public…until now.

This fascist Silverstring crew will stop at nothing to enforce their views on to video gamers. They know that censorship, control, and exclusion, are the only ways to get people to agree with them. Look at the polling, if you don’t believe me. We are the majority, not them. They know this as well, and that’s why they try to take over the culture…and video games are just the latest front in the battle.