THE UNPROFESSIONAL: Leigh Alexander is a Drunken Bully Who Needs to Be Fired

I am in a festive mood this evening. I say evening, but in reality, it’s almost 5:00 AM. Good morning to all our international readers, and any early-risers here in the United States of America. It’s also GDC Week! As you may remember, that’s been the focus of some of my recent reporting. Some attendees took issue with me because I highlighted the drugs, drinking, and partying aspects of GDC. The thing is, I didn’t feature it. They made all this public themselves on social media. Just like Leigh Alexander showed us way back when, these people constantly put their own shit out there.

Speaking of Leigh, this is her time of the year! Like she says: “It’s GDC. I will be drunk for the next seven days.” Not only is the woman a bully on twitter, she’s also a totally unprofessional drunken mess half the time. TotalBiscuit was right to call her out for being a fucking drunk. Where would he get an idea like that, you ask? Maybe from all the times she publicly claims to be wasted. Her past outbursts about ruining careers, real career women not having children, bottles through people’s eyes, ghetto men…perhaps they were booze inspired, like her career? How much more damage is she going to do under the influence?

Or perhaps that's just what happens when you find your journalistic inspiration at the bottom of a bottle. Sigh.

Below is just one stretch in the spring of 2013 (we have plenty from last year down below in the gallery). You don’t see too many journos making such a drunken spectacle of themselves. It wouldn’t be so bad if she was a nice drunk. Instead, she lashes out. Again, there is a major pattern here: 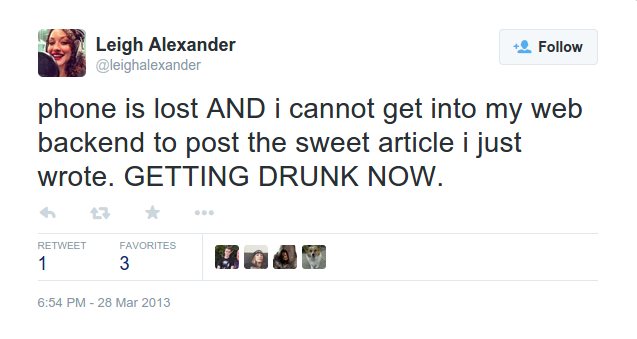 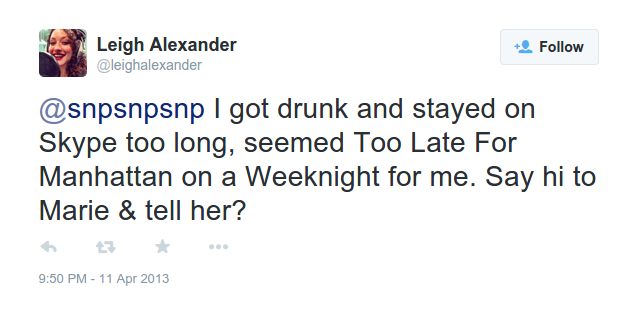 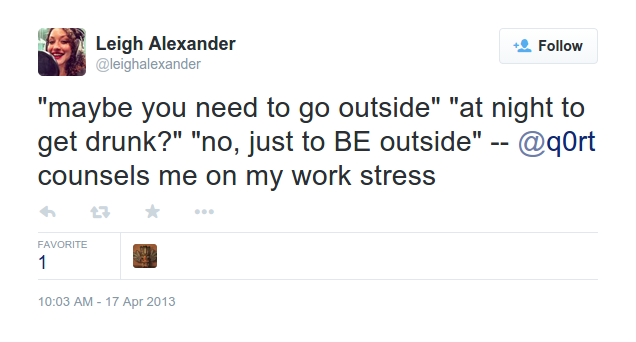 This is the sort of thing I’m talking about. I can only imagine what she’s like in person. How many acts of actual violence has Leigh Alexander committed? Has it not crossed your mind as well? I have no police records or anything like that, but she just seems like an extremely violent person. Maybe that’s just the booze talking.

This is a tweet from one of my early articles, but it’s relevant here. When all her abhorrent behavior is stacked together, you can really see what an unprofessional louse Ms. Alexander really is. 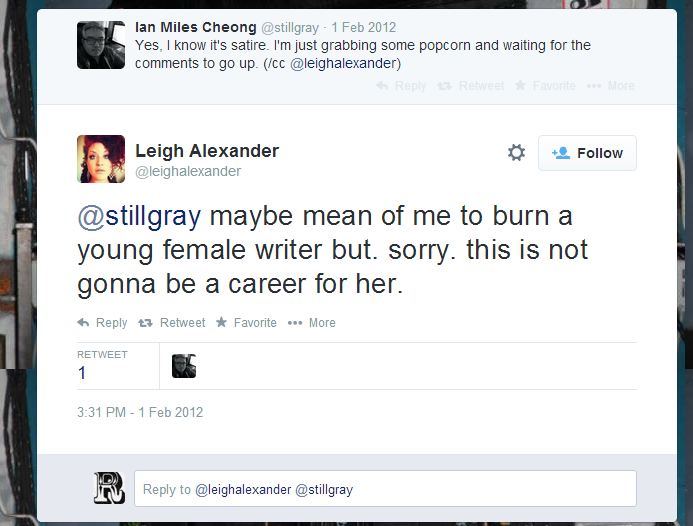 Back to the drunkenness: 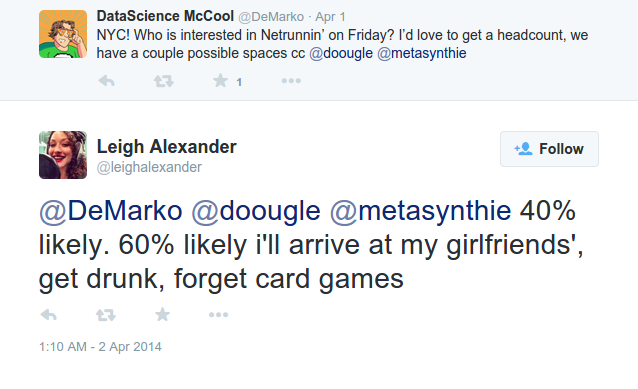 This is just a basic search. There’s a shitload more for anyone who wants to find it. In fact, there’s a lot more down below in the gallery. I could just sit here and run through them all, but I think you get the picture. Leigh Alexander seems to have a serious drinking problem, and it’s been known to cause damage to others. You don’t talk about getting drunk that much without having issues, ask any substance abuse counselor. Her problems with booze is now the punchline to jokes. I’m sure her SJW friends actually laugh at her behind her back, and call her a lush. I mean, look at how they did Wu earlier today. If Leigh ever steps out of line and talks like she used to, I’m sure they’ll turn on her drunk ass as well.

Until then, I have to ask Gamasutra, and UBM (who also own the GDC): how can you keep this drunken bully on staff?

Also, keep in mind, I still didn’t get all the screens (although I got the vast majority). Check here for the full list. Special thanks goes out to TheIvyClover1 for the original archiving.