OK, so I’m going to do something a little bit different. I talked a lot about the Republican National Convention last week but I didn’t write as much as I had originally planned. Let’s make up for that during the Democratic convention taking place this week in Philadelphia. What I’m going to do is watch the speeches and come back here at certain points to give some thoughts on their content and presentation. Although Michelle Obama’s speech seems to be getting most of the rave reviews, and if we were going in chronological order also came before Bernie’s, I’m going to start with Senator Sanders.

Bernie Sanders Sells Out at DNC 2016:

As I turn this on, I’m reminded of how fucking stupid some Bernie supporters are. The dude is a politician and he believes he has a lot of politicking left to do. This was always going to be the outcome, especially when you consider that the DNC was actively working against him. I’m pretty sure he would have lost anyway, but it’s still a disgrace.

This crowd is not being very respectful about letting the guy speak, but it’s because they’re cheering him. I guess when you consider the way they treated others last night, this is an improvement.

He repeated the “$27 average donation” line, which produced this brilliant tweet…

He’s now moving into his “historical” rant about all his campaign acheived. Yes, they have things to crow about but at the end of the day, they lost. History is filled with loser, though, so perhaps I’m off-base.

These people crying in the crowd during Bernie's speech are sort of pathetic, aren't they?

It's like they didn't know he was gonna lose.

Now he’s attacking the media. OK, he has a point there.

Moving on to address wealth and income inequality, which are at historically high levels right now. I’m not really sure how to fix that, but it’s not healthy for society, especially if it keeps getting even worse. The sad thing is, Bernie’s delivery is whack. He makes a political novice like Donald Trump seem like Bill Clinton in his prime.

According to Sanders, Obama pretty much saved the world during his presidency.

I think he just played a game where he tried to name the most minority groups he could think of off the top of his head. I’m pretty sure I could have done better, but props for the Sikh shoutout.

[A]ny objective observer will conclude that – based on her ideas and her leadership – Hillary Clinton must become the next president of the United States. The choice is not even close.

I don’t believe that statement is true, but I laughed as you twisted the knife deeper into your supporter’s backs, Bernie.

Here comes the personal story from America that never really moves the needle very much, in my opinion. It seems cheap.

Now, Hillary’s name is getting booed all to hell hahaha. They also chanted some shit, but I can’t make it out. 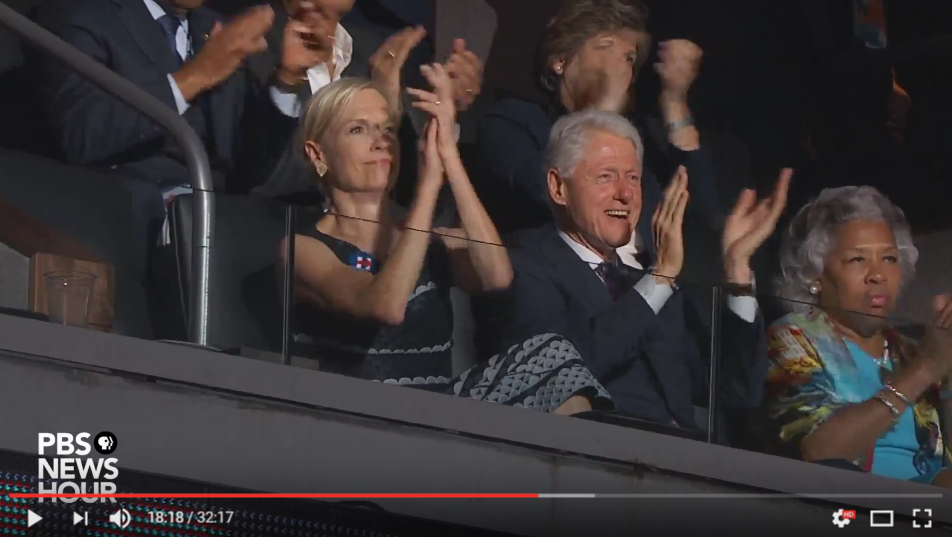 I also agree with him on Citizens United, but then again I am someone who is deeply troubled with the current state of campaign financing. Honestly, they would still find ways around any sort of restrictions, so it’s useless on some level. But shit as it is now is broken. Politicians have to spend a large chunk of their time fundraising. That’s not good for a wide variety of reasons.

Moving on, he starts talking about the importance of the Supreme Court, which is very true. In terms of substance he’s making a good case for why Bernie supporters shouldn’t sit this one out. He’s not exactly doing it with style, though. I don’t like the way he does public speaking.

We’re into climate change, education, and other more specific policy areas where there’s a pretty big gap between her and Trump. The thing is, a lot of people are casting a vote for Trump just to stick it to career pols like Bernie Sanders and Hillary Clinton. I’m not sure how much this would move the general electorate, but it’s not really for them. He’s out there to bring his people around to Hillary as much as he can.

He blabs on for a minute then moves into talking about how progressive the Democratic party platform is thanks to his “coming together” with the Clinton team. The only problem with this is that the party platform doesn’t really mean jack shit. Big victory there, Bern.

Hillary Clinton will make an outstanding president and I am proud to stand with her here tonight.

And with that, the speech ends. I was impressed with the content of the second half, but the actual presentation and skill kinda sucked. Still, credit where credit is due. I think he might have brought some of his people back around to the Democrats. We’ll see if that plays out or if many of them are simply too disillusioned by the entire process.