Think What You Want About James Deen, But I’m Tired of Rape Cases Being Tried in the Media

This column isn’t meant to just be about James Deen, or the recent allegations made against him. I’m fully aware that more accusers have come out within the last 24 hours, and I don’t really have much to say about it. Well, OK, I do have a couple of things. First off, if Deen is a serial sexual abuser, then he should be punished. If he isn’t, I hope with all my heart that he ends up clearing his name. But regardless of either one of those eventualities, the thing I am absolutely sick of, is the way rape cases are always tried in the media over the last 20-30 years. I don’t know if there is any way to put the genie back into the bottle on this one, but I would like to think there is. 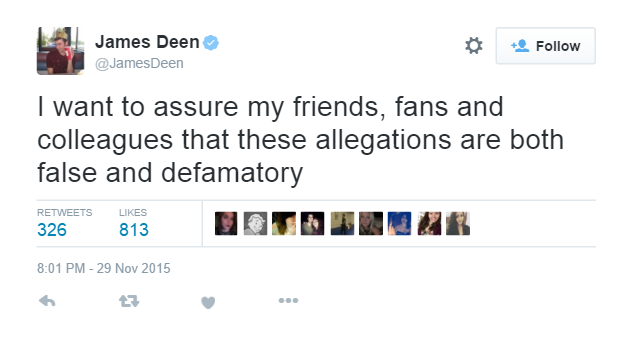 I know one of the things that got me so animated in my early online debates with radical feminists was the way they all stridently acted as if no one ever made a false rape charge. It can and does happen, but what pissed me off the most about their attitude was the way they wanted their “believe all women” mantra transferred over to the courts as well. I’ll be honest and tell you that if a woman who I trusted and loved told me that they had been raped, I would believe them. But I also believe in the rule of law and the concept of innocent until proven guilty. I would never want to transfer my personal judgement over to the legal system, however many of these radicals do.

As for the coverage problem I mentioned in the open, could the media enact some blanket policy among all the big outlets not to report rape accusations the way they do now? Yes, they could, although they never would. Even if these mega-media orgs did get together and set that up, we would all still be at the mercy of smaller sites like the one you’re on now. Since not everyone shares my view, I’m sure a juicy story would be much too attractive for a lot of editors to turn down. So, there’s only one answer, and I don’t think it would really fly.

If there was some law passed against naming people accused of rape when they’re charged or first accused, then that might fix it. The problem here is, you’re really getting into some dicey areas with regards to free speech, and I’m not sure I’m comfortable with the government intervening in that way. Maybe there is some narrow law that can be tailored, but I’m not sure. I guess I’m just bitching about something that will be nearly impossible to fix. Should people like Stoya be charged for broadcasting out rape allegations on social media rather than going to the police? How far could we really take this? I don’t have any answers, but I think the questions are worth asking.

In regards to James Deen, I would advise him to get out front and do some sort of televised interview. I know his lawyers are probably telling him to shut the fuck up, and I would agree, he should be careful with how far he goes. He has a problem right now, though, and that’s the media and his accusers painting the picture before he has a chance to respond in a big way. He did put out some tweets last night (shown above), which was a start. Still, when you look at it from a public relations standpoint, he’s losing right now. To be fair, a big misstep here could cost him everything, so it’s good to be cautious and falling behind a little early is something that can be overcome. If rape cases weren’t tried in the media, then that last paragraph wouldn’t have been necessary, but alas, that’s not the world we live in.

I did a show last night on Streamup about a BBC production called Is This Rape: Sex on Trial. The show itself was sort of bizarre, but talked about the James Deen situation towards the end, so check that out. I’ll timestamp it and add it in below for those who want to watch. I’ll probably have more to say about this case later, but the unseemly media aspect is what always hits me in the face first. There has to be some way we could handle rape allegations better. Sadly, without a major push from the public and media, it will never happen.

UPDATE: TMZ has more from the Deen camp…