Thoughts On The GOP Debate From Last Night, Plus The AfterShot Post Show

I ended up streaming the GOP debate last night. We had a pretty good time over on Streamup, with about 50-60 of our friends. The debate itself wasn’t too exciting, but I felt like it was better than the last one. Donald Trump absolutely leveled Gov. John Kasich (R-OH) at one point, which was hilarious. Actually, I think that was the high water mark for me. Some people see that exchange differently, saying that Kasich won it because some folks booed Trump. I disagree, but even if you don’t, Kasich pissed away that advantage later on in the show during a tangle with Sen. Ted Cruz (R-TX)…

Kasich’s second attempt to debunk what he’s called “crazy” stances didn’t go over as well. The Ohio governor called out Sen. Ted Cruz out for insisting he’d allow Bank of America, along with its millions of everyday depositors, to fail rather than bail it out. You can’t let hard-working people lose their savings, Kasich tried to say — and did say, if you take the sum of his response.

But it didn’t come out quite that way. Kasich articulated his stance, and then Cruz jumped back in.

“Why would you then bail out rich Wall Street banks, but not Main street, not Mom and Pop?” Cruz said.

“I wouldn’t,” Kasich responded. And, eventually: “I would not let the people who put their money in there all go down.”

“So you would bail them out,” Cruz interrupted.

“No, as an executive,” Kasich said, “I would figure out how to separate those people who can afford it versus those people, or the hard-working folks who put those money in those institutions–“

And that’s when the boos started.

More, from The Plain Dealer…

Kasich’s worst moment came late, when he struggled to articulate his position on the Wall Street bailouts. Sen. Ted Cruz drew him into a debate over the merits of helping rich bankers over “mom-and-pop” businesses. Kasich, in his clunky, confusing answer, said he preferred to protect average customers over investors but offered no clear alternative.

Which moment will stand out more to voters and the national media?

Agreed. As for the rest of the debate, I would say that Sen. Marco Rubio (R-FL) and Cruz pretty much stole the show. Still, Trump had his best performance since the first debate, and I think he was right there with those two. As for Ben Carson, I don’t see how this motherfucker keeps rolling along, but maybe I just don’t get it. I’m not religious, so a large part of his appeal is lost on me. Maybe I’m missing something. If there’s any Carson fans, please let me know where I’m going wrong here. I keep waiting for him to crash and burn, but it hasn’t happened yet. I know some people say it’s ridiculous for Donald Trump to be considered a presidential frontrunner, but to me, it’s way more insane to be considering Ben Carson. Time will tell, as always. The first contest, the Iowa Caucuses, takes place on February 1st. In fact, here’s a handy list of all the early nominating votes: 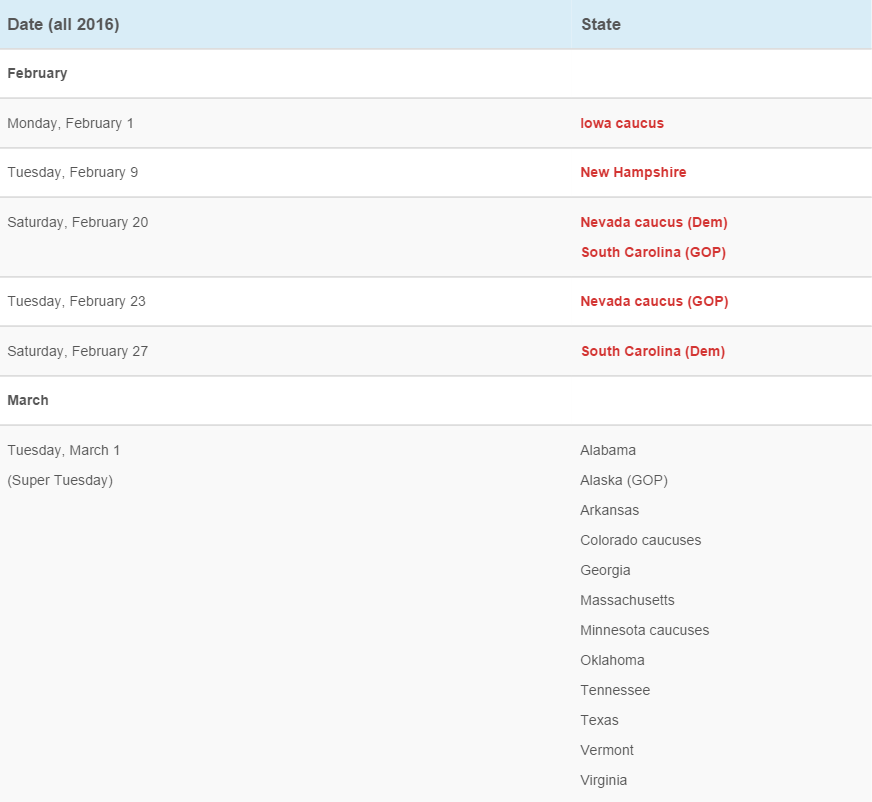 We also did an AfterShot, which I’m going to link to down below once it’s done uploading (EDIT: It’s done). Check that out if you have the time. It’s only around 40 minutes long, but we get into all kinds of shit, including the meaning of life itself. Yes, really. Overall, I had a great time with the stream, so I’ll probably be doing those again in the future. We’ll see what happens. As for the LIVE show today, it might be getting postponed in favor of Fallout 4, but I haven’t decided yet. I’ll let you know one way or the other later on today.