During the initial phases of a controversy, the program known as
GGAutoBlocker was created under the false pretense of being a tool to combat online harassment. (F2) However the true intention of the tool is not to prevent harassment, but rather create a list of targets that they identify as harassers simply by following or associating with a person under the hashtag. (A4, B8) This tool as
stated by the creator, Randi Harper, is not only meant to be a block list, but also meant to ostracize and shame all those within the list. (A5) Therefore is an attempt to remove or prevent these individuals from seeking or entering employment within the tech industry. (E3)

The tool itself is not programmed adequately for its intended use. First the creator or admin of the program has to put twitter accounts on an origin list, which do not have to be connected to harassment of any kind. (A4, B11) Then it gathers the followers of those accounts and compares them. (A2) Next in the process is
looking to see if the followers are following two or more of these accounts. (A2) The program does not check the content of tweets for harassment, just who the person follows before blocking. (B11) Initially, there was no “white list” that would remove innocent people off of the GGAutoBlocker. This was later added after the KFC (Kentucky Fried Chicken) corporate account was added to the blocklist. (B2) The creator also changed the name of the origin list of account names from Blacklist.txt to Sourcelist.txt. (A7) This is an example of how inadequate this program is.

The tool itself was controversial before its release. The blocklist itself was available on November 4th, 2014. (A1) While she tries to say that the tool will not be used as industry blacklist she does have all the names in a convenient text file called “blacklist.txt” and has discussed about using the list to hinder or punish individuals trying to enter the industry or individuals that are currently within the
industry. (A2, B1) When the tool was first released there were several users on the blocklist that had nothing to do with online harassment at all, yet they were falsely labeled as harassers based on the blocklist. (B2, B3, B5) One example of these falsely accused individuals was @KFC. (B2) The head of IGDA Puerto Rico, Roberto Rosario was also added to the blocklist since he followed an account that was on the origin list. (B3, B5) Mr. Rosario requested that his name be removed from the blocklist and was refused by Ms. Harper. (D7)

One result of this poorly created tool was that IGDA names over ten thousand people as the worst offenders of online harassment without any possible proof. (C1, C2, E4). Several sites also discussed the poor execution of the GGAutoBlocker. (C3) There have been a few articles discussing the issue of privacy with the GGAutoBlocker and Ms. Harper. (C4) There have been releases on this subject of
personal information deliberately being release by Ms. Harper. (C4) Other companies have started using the GGAutoBlocker other than the IGDA. (C8)

The creator of the blocklist has actively harassed individuals who are not on the list or involved in any current online harassment. (D1, D2, D3, D4, E6) Ms. Harper is currently performing operations under three separate accounts, @randi_ebooks, @freebsdgirl, and @ggautoblocker. (F4, F5, F6) Any individual who has brought up valid concerns regarding the GGAutoBlocker has been met with
harsh comments and shaming tactics by Ms. Harper and her associates. (D3, D7) Some individuals have been blocked by Ms. Harper’s GGAutoBlocker and have made several requests to have their accounts put on the whitelist and she has given no logical reason as to why they have been refused. (B6, B9) The mass blocking by the GGAutoBlocker also made it difficult for some individuals to contact clients that needed their assistance. (B12) During recent events it seems that Ms. Harper has received special treatment from staff at twitter. (C11) The GGAutoBlocker was created as she stated to block harassment, yet Ms. Harper has harassed people and
is not on the list she has created.

Just after the creation of the GGAutoBlocker, Ms. Harper herself has discussed with others to use this as an industry blacklist. (B1, E7) She has also created separate lists in order to dox (release of personal or non public information) users. (E1) There are several individuals who have stated their opinions on how the GGAutoBlocker has been pushed out as a means of censorship. (C4, C5, C6, C7) Those who disagree with her tactics are also discriminated against. (E6) Ms. Harper and associates are currently targeting an indie game developer, via the developer’s Kickstarter in an attempt to hinder their finances. (E8) Very recently she reconfirmed the role of the GGAutoBlocker is a blacklist. (E9)

There is a common theme through out the gathering and research of the material above, that the GGAutoBlocker is a tool for harassment. The individuals on the origin list have been harassed, threatened, and had their personal information released. The actions against these individuals as well as many others
on this list would have been reduced or never existed, if this list was not created. If the list was never discussed as being used as a blacklist people on it would not have to worry about their current, future, or even potential jobs being on the line or being turned down by employers. Currently Ms. Harper has plans on utilizing her programs for many future controversies down the line. (F7) We are just now starting to see the negative effect of the GGAutoblocker. (C12)

How Randi Harper will exploit this down the line, is anyone’s guess.

REPLY from the site that hosts the GGAutoBlocker: 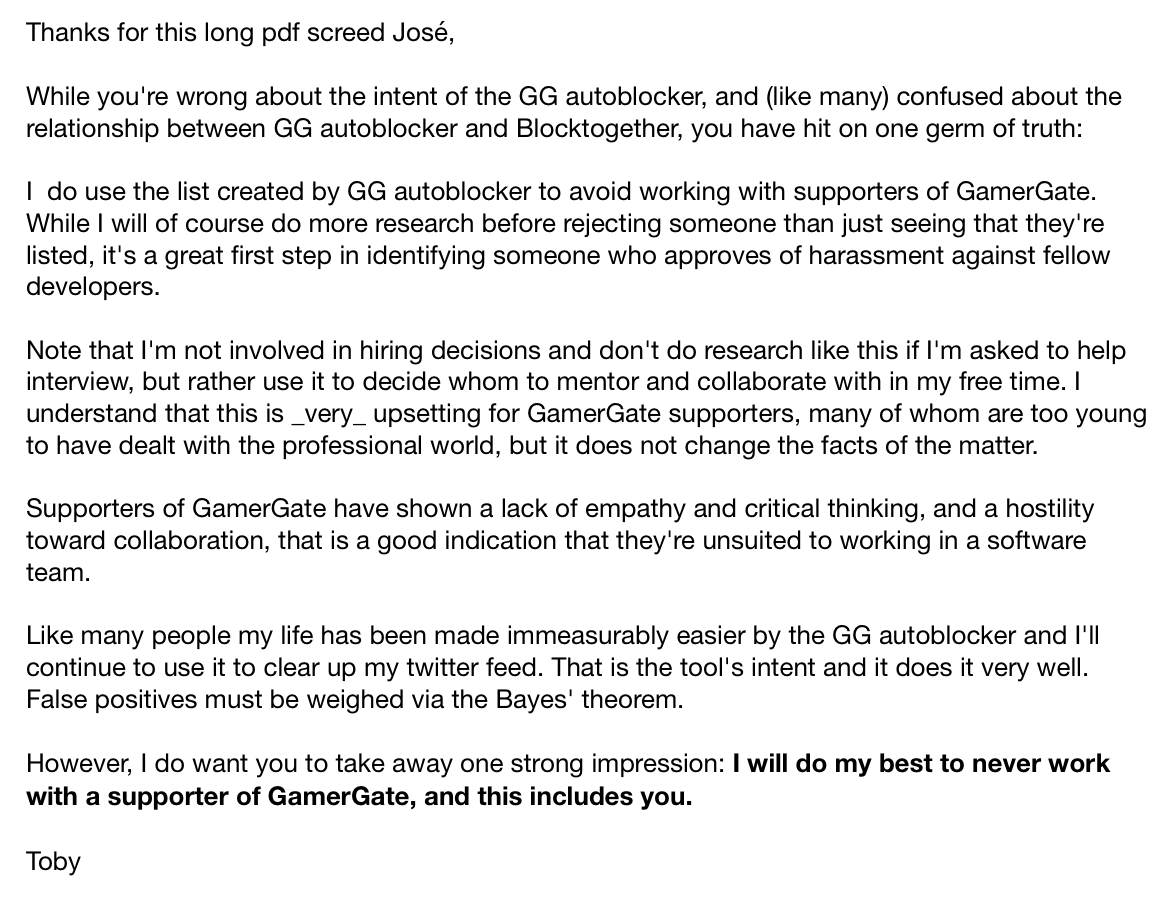