Some days, the news just keeps coming. This would be one of those days. Just when I thought I would be getting ready for the PPV, TotalBiscuit goes and drops a bomb on a radical feminist who’s been trying to smear him on Twitter. I was going to cover this later tonight, but now that TB has decided to let loose, I figured we better go ahead and cover it now. Let me go ahead and give you a rundown, in case you don’t know the full story.

GOG.com is an online distribution outlet for video games (similar to Valve’s Steam) owned by CD Projekt Red, creators of The Witcher series. They had a promotion going on where they showed some of TotalBiscuit’s choice picks, and gave you a deal on ’em. Some shit like that. I honestly barely even saw the actual off before SJW-tards were running over with diarrhea of the mouth about it: 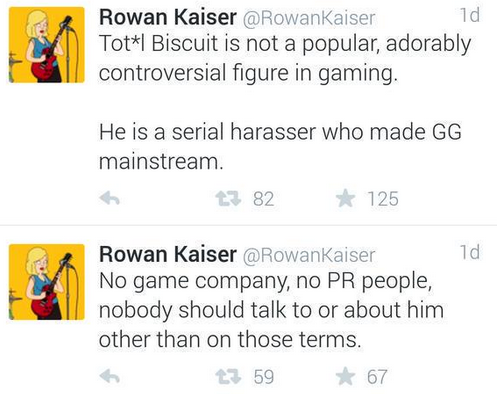 The main person TB decided to respond to, was Rowan Kaiser. He writes for The A.V. Club, and other than that, I’ve never heard of the son of a bitch. It seems I’m not alone. TotalBiscuit said something similar on his SoundCloud. I would encourage all of you to go listen to that ASAP:

Here’s some choice quotes coming up. But keep in mind, this person lied about TB spreading the “Five Guys” video, among other things. It’s likely that he got the story from third-hand Twitter groupie, or some shit. Still, this is why you should always qualify shit if you don’t know they whole story. TB said this last year of harassment and torment has caused him to seek out therapy. I gotta say, I could probably use some, but I don’t have health insurance haha.

But the point he’s making is that anyone online with any kind of following faces harassment of some sort. I’ve certainly faced it and I wouldn’t think of myself as a huge personality. I have a nice base here with you all, but when I think about someone like TotalBiscuit it’s on another level. He’s has two million followers on YouTube and almost a half million on Twitter. This guy faces shit on everything, including constant death threats. I’m sure he gets shit on even random tweets about non-controversial topics. Then you have the SJW crew trying to say he’s the leader of a hate mob. Oh yea, the guy has been dealing with cancer as well. It’s a wonder he’s held up as well as he has.

Let’s check out a few quotes from his audio clip and a couple reaction tweets:

"Women are not the only ones who are harassed online." – @Totalbiscuit

"Whatever ridiculous narrative that you've been fed, you really need to do some research." – @Totalbiscuit

"When you engage in character assassination that has no basis in fact, you are a harasser. It's really that simple." – @Totalbiscuit

Rowan Kaiser, str8 pussy. PROTECTED? LOL, how big of a bitch do you have to be to go protected?

I am one of the people who sent @TotalBiscuit harassment over GG stuff last year. I deeply apologize. I hope he sees this.

I’m going to come back and update this as needed. I think we have a pretty good base here. I’m sure I’ll find more stuff as the evening goes on. Go ahead and sound off with your thoughts. I’ll be back in a few.