Trump’s Nevada Victory Has The Establishment on Suicide Watch

I was so tired going into last night’s Nevada caucus results, that I actually fell asleep before the results started to come in. Somehow I origianlly had it in my mind that the tally was supposed to start being revealed around 9pm EST, but it actually wasn’t until midnight that the scores started to roll in. Luckily, I didn’t miss much, since the race was immediately called for Donald Trump. It was his biggest victory to date. Here’s the results, in case you haven’t seen them yet: 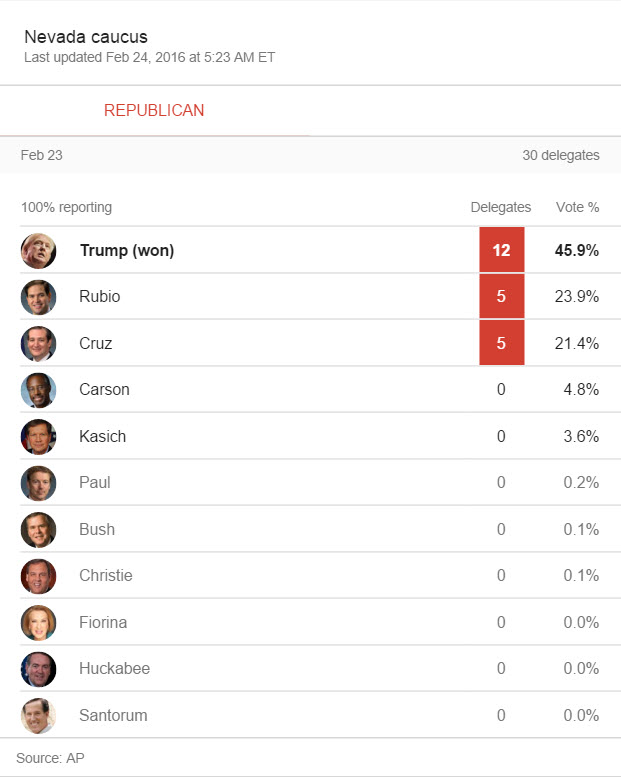 As you can see, Trump totally dominated the field. It’s hard to spin a 22-point thrashing, but the establishment will try, once they get their head out of their hands. In the immediate aftermath of this beating, it seems like they’re mostly placating themselves with bitching and moaning. Thankfully, some of the more reasonable people are starting to see the writing on the wall.

Facts are facts: Barring an unprecedented collapse, Donald J. Trump will be the nominee of the Republican Party in 2016.

Speaking of the establishment, let’s go through some of their greatest hits from last night, shall we? 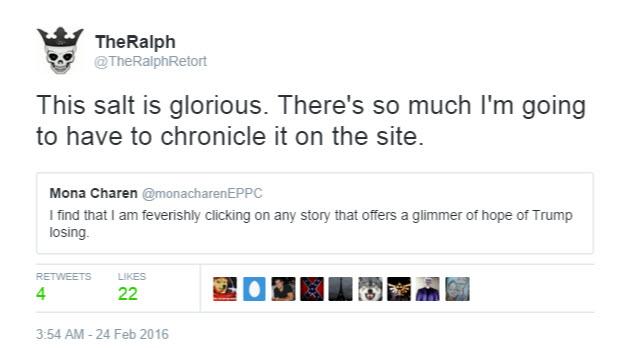 Trump campaign passing these out to supporters after his speech with $14 in chips for Circus Circus. #Caring pic.twitter.com/hr47OwHKqk

When Trump crashes and burns, either as a candidate or as a president, he'll blame dark forces and conspiracies. This won't end.

So this really is the way a republic degrades.

Hey Carson and Kasich: WTF are you thinking? Seriously.

Worse, what are the people who are voting for them thinking?

Damn, we are stupid

Leon doesn’t get it. If candidates drop out of the race, it’s not going to matter. Trump is still going to win. It’s not like all those votes are going to magically go to Marco Rubio, no matter how hard these people wish for that to be the case. They’re never going to learn, are they? 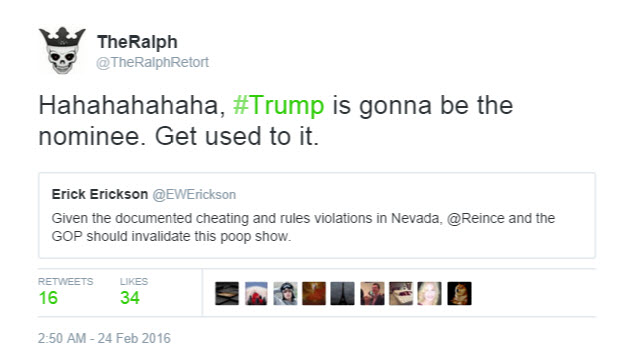 I’ll probably come back and update this later, but those were most of the highlights I’ve seen so far. Not everyone has their heads in the sand, as you can see from the last tweet. Some people are actually starting to come to grips with the reality I stated above. Donald Trump is going to be the Republican nominee in November. The sooner these clowns come to grips with it, the better. Of course if they don’t, at least we will have lots of laughs on the way to the convention. Keep up the good work, guys!

UPDATE: Here’s Trump’s victory speech, for those who want to see it.