Unlike me, radical feminism never takes a day off. Well, I did get the one post up early this morning, so it wasn’t a full day off. Nevertheless, there’s still a lot to get to. Even though Father’s Day is just about over here on the East Coast, I wanted to talk about all the rad fem hate that I’ve seen spewed about it this year. I’m sure it’s happened in year’s past as well, but this is the first time I’ve been on the lookout for it.

Also, even though my father doesn’t read this site (or any others lol), here’s to you, Pops! Happy Father’s Day!

First, let’s head to Tumblrville, where the craziest of the crazies like to hang. What jewels of wisdom do they have to drop about this day dedicated to dads (some of these courtesy of Candy Jam): 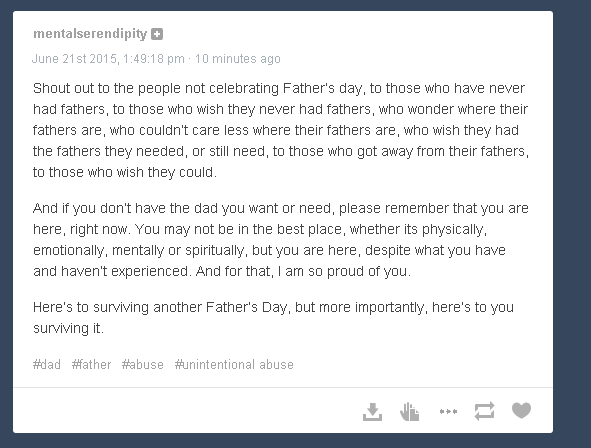 (they definitely won’t be better off for it, you idiot)

But Twitter has had its fair share of hate for fathers as well. Some feminist opponents started the #EndFathersDay tag as a joke. It was quickly shown that a shitload of feminists actually do think this way. One even said that it was offensive to single mothers. I actually read a column on that once, but can’t seem to locate it. Of course you could always just go to your own Facebook feed and see a shitload of mothers talking about it. At least I can. “Happy Father’s Day to me..” etc, etc. I don’t see single fathers posting that shit on Mother’s Day, but I digress.

Or you could just go watch this ad. Don’t get me wrong, I respect women who have to do it all on their own (not those who choose to block fathers, mind you). But we have Mother’s Day already. Why try to takeover the day we have set aside for dads? It just doesn’t make sense to me.

Let me know of any other examples you can find on this front. It looks like John Oliver has some shit going on, so I’m about to go write that up after I watch the segment for myself. I’ll look for a link or YouTube video to share as well.