I’m about to go watch Bad Santa with a loved one in honor of the holidays, but before I do, I thought it was important to come here and give you a short update on the way Twitter is working as of late. As you may recall, I’ve been on the forefront of reporting their shady-ass practices over the last year or so. To make it simple, Twitter has a pedophile problem. If you have the right kind of politics, then you’re allowed to get away with shit like saying you raped your little stepsister. No, really, you are.

I mean, I guess it’s fair for them to allow someone to post that, but if that’s the case, what’s wrong with confronting someone with the info they willingly shared? For example, if I confessed to raping a cousin on social media, don’t you think it’s OK for some SJW shitbag to bring that up whenever I try to talk shit about their misandric movement? To me, it’s more than appropriate. But if you’re an SJW, you’re protected from this type of confrontation, as we’ve seen once again tonight.

So #gamergate. @Deadwingduck was just suspended for repeating the fact that @NAFEDUDE sexually assaulted his sister https://t.co/8o1mul5lzA

Here’s the tweet DeadwingDuck was confronting NAFEDUDE with, by the way. I don’t think things will ever get any sicker than this…at least I HOPE THEY DON’T. 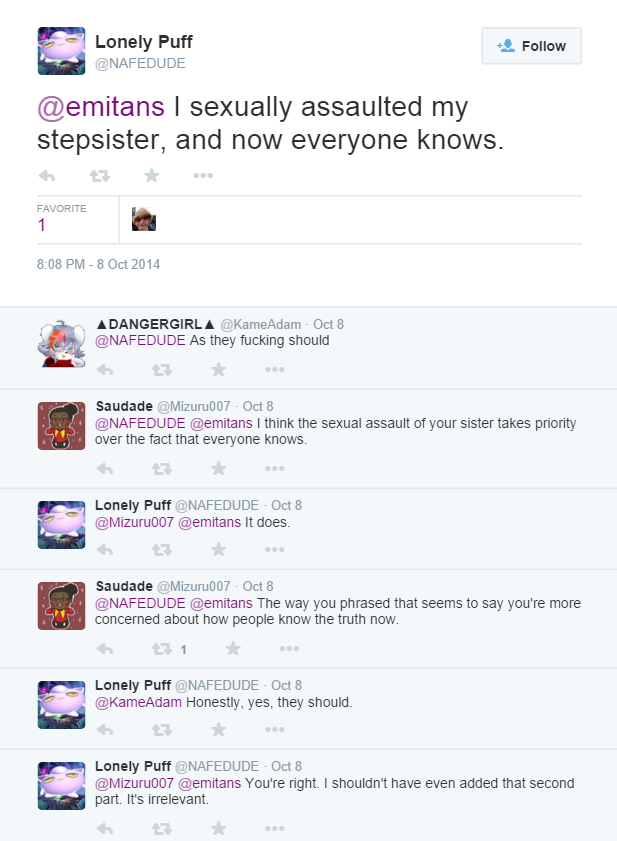 He’s not joking at all, people. He fully admitted to raping his stepsister on social media. How in the hell can Twitter justify banning people who bring this factoid up? I understand that DeadwingDuck probably could have handled things differently, like I’ve discussed in the past. Don’t tag people when you’re talking about nasty nuggets like the one I showed you above. But still, this is even more outrageous than usual. Of course, we didn’t have to look far in order to find out who was behind all this…

Shouldn't have taken me explaining Twitter's ToS in detail w/ evidence of abuse to Twitter Support, but I'm glad they finally took action.

I think I have a pretty good system in place for avoiding suspension myself, but fuck, who knows nowadays? To me, if you tweet out something like NAFEDUDE did (ya know, confessing to a familial rape) you should be expecting to get confronted with that info until the day you die. I don’t know if Deadwing took it any further than that, but regardless, learn from this and be careful with who you tag and respond to…because people like Izzy Galvez are watching and looking for an excuse to get you bounced.