The ever lovely Lauren Southern recently flagged something worrying in her Twitter feed around one member group of Twitter’s new Orwellian “Trust and Safety Council”.

As Ralph, our beloved skull-headed Southern statesman, already wrote about this new advisory group of Dudley-Do-Goods, overbearing nannys and banhammer wielding chucklefucks, it already includes Feminazi Frequency and the in house know-nothing carnival barker Anita $arkee$sian. To many peoples amazement it seems Hamburgler Harper and Zoe Quinn have yet to scent the whiff of free TwatterPRBux on the wind and hitch their scrabby CON and OAPI scams to the bandwagon….but hey…give it time. Ralph’s UK based better half Lovely Nora also kindly drew our collective attention to the fact that a group promoting what it calls moderate Islam and what anyone with half a brain cell will see is anything but are also on this new advisory group. Sargon noted that Hollaback, disseminators of Punk’d-like staged “street harassment” videos and accounts (which have been debunked), are also involved. So… the usual suspect crowd of censorious shysters, scam artists and propagandists for the SocJus Cult.

But what Lauren flagged up was potentially even more worrying.

Because that is a bit blurry here is the original: 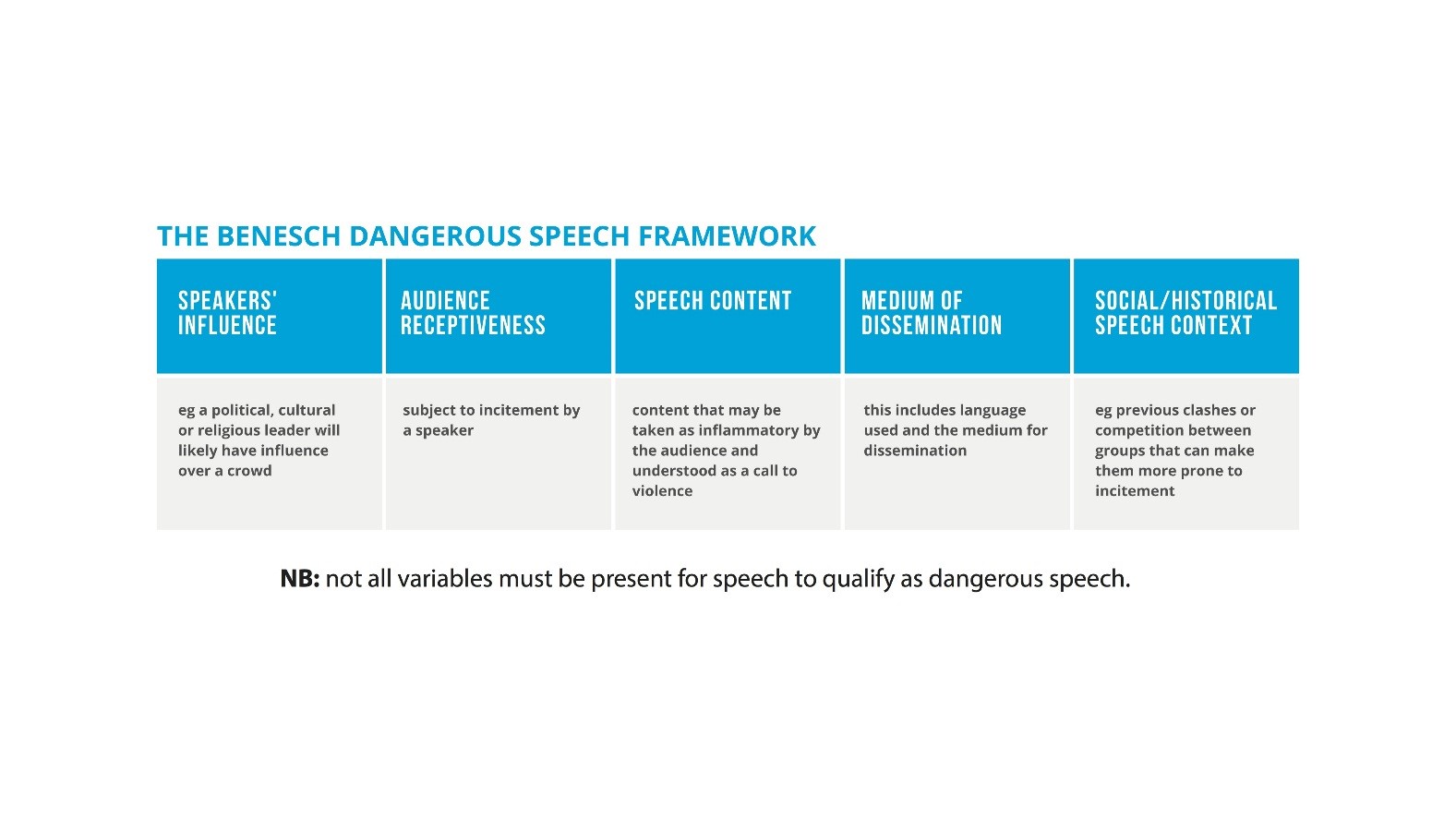 Now, I have had a ‘working interest’ in genocide studies since the end of the 1990s, and as part of the early stages spent months reading every sodding academic paper, book, and collated news report files I could lay my hand on. As a research topic genocide has a terrible attraction. Its sheer nightmarish nature draws you in with a gravity and horror it is hard to break free of. What I can assure you is that the ‘framework’ Benesch has branded with her own name has been bandied about in one form or another since the 1950s when studies where focused on the Nazi Holocaust, but was certainly established when research intensified at the end of the 20thC after the horrors of Cambodia, Rwanda, the Balkans Conflicts, and many more in African states during the turbulent post-colonial years. Historical narratives such as the classic “Rise and Fall of the Third Reich” by William L Shirer discussed similar factors in the lead up to the Holocaust, and academic and policy research by groups such as the IDRC, Genocide Watch, and the OECD had discussed in detail the roles media and propaganda play in the run up to outbreaks of mass violence and genocide. I could provide you with a long list of works which predate Benesch’s by a decade or more, but hey…use Google. It isn’t hard to find.

Benesch’s work is hardly original. Actually, barely original is a more accurate description. I think maybe “plagiarism” would be a bit strong a term to throw at Benesch, but “narcissism” is certainly not. If I come up with a ‘framework’ for making a delicious cheese, ham and pickled onion sandwich, and called it the Sandman Sandwich System you would laugh me out of the room. Do the same in SocJus land and its accolades, plaudits and protection from any form of challenge.

And is Benesch what we could call a member of the Cult of Socjus? Well, m’Lud, the Prosecution would like to tender the lady’s own Twitter stream into evidence, which as you will see contains numerous posts which contain more than a whiff of SocJus. There are pro BLM posts in there, “don’t be mean to Muslims” bleats, and even one or two #TakeBackTheTech retweets posted by other SJW drones. In other media she is certainly no fan of law enforcement and in the same article seems to suggest that poor ikkle buttercups and snowflakes need protecting online from stuff like criticism and that Nanny Knowbests like her should be writing the rules about what is defined as free speech. There are many more examples extant online m’Lud, but the Prosecution rests its case.

So why, as Lauren Southern proposes, should Twitterfags be worried by Benesch and her organisations presence on the Council steering group?

Well, take a long look at her framework with a few steps back, and you can see how its wonderfully vague terminology, including the headline grabber ‘Dangerous Speech’, can be twisted by some to fit any perceived enemy or problem. How a set of factors concerning mass violence and genocide could potentially be perverted in the hands of SJWs to call for the mass shutdown of user profiles for any who question their diktats and stupidity. Let’s face it, developments at Twitter over the past 12 months should leave no Twitter user in our movement in any doubt that the SJW infested management will misapply any tool they are given to shut profiles down at the drop of a hat. Do you really think for one minute that SocJus rats like Harper, Quinn and $arkee$sian and their banhammer buddies within Twitter won’t abuse that framework to call for and justify shutdowns on profiles they deem ‘Dangerous’?

Here is a thought exercise: Apply that Dangerous Speech Framework to the following speech by King Henry V from the play of the same name by Shakespeare:

Yeah….hmmm…interesting eh? If old King Henry had Twitter or a radio station to broadcast that ball-clenching, gut-stirring speech calling his men to arms, then Benesch would have not only branded him a genocidal maniac, she would have shut him down, thus allowing the traitorous French burghers of Harfleur to continue their unlawful rebellion against Good King Hal.

Too abstract an example? Well what about if someone from the right wing group English Defence League (EDL) or right wing gadfly and current PEGIDA UK promoter Tommy Robinson posts a link to that video on their Twitter feed? How about if Donald Trump posted a quote about Manifest Destiny by a previous POTUS like William T Sherman? Or posted this image and quote by John L O’Sullivan? I’m not saying he would…but what if he did?

I don’t support such groups or their positions, but do I think they should be prevented from communicating them? Hell no! How else can their ideas and principles be debated and challenged? Also, I’d rather I was aware of what these groups are thinking and saying. Forewarned is Forearmed.

As the old saying goes, “The Road To Hell Is Paved With Good Intentions”. Benesch may maintain her groups involvement with this sinister Twitter Star Chamber is benign, but as with the original, it will in time just become another tool for oppression behind closed doors, dominated and directed by vested interests, and used to silence dissent.

The rights to free speech, free expression and free assembly are never ones to surrender without the bloodiest of resistances. For once they are gone, it takes terrible sacrifices to regain them once again. Our ancestors paid in blood, sweat and tears to give us those rights, and we should never allow them to be taken away without a struggle equal to theirs.

I don’t have a dog in this fight. I have never seen the point of, the value of, or the attraction of Twitter. To me it is just the white noise of the online world, but to many others I know it is a valued communications medium. If you are one of those I suggest you get your arses in gear, stand up and fight back.

Or are you happy with your speech being potentially branded as “Dangerous”?