Salesforce has ruled out a bid for Twitter, sending shares of Twitter’s stock to their lowest level since August.

“In this case we’ve walked away. It wasn’t the right fit for us,” Marc Benioff, chief executive of Salesforce, said to the Financial Times in a report published Friday.

With Salesforce out of the picture, Twitter is likely going to abandon its exploration of a sale. This could be a boon to CEO Jack Dorsey, who had reportedly pushed to stay independent. But it also raises expectations for the company’s performance. Twitter has been putting a huge emphasis on live video, striking deals with the NFL and others to carry live streams of high-profile events. Investors will look for any signals that this strategy is working when the company reports its Q3 earnings at the end of the month. 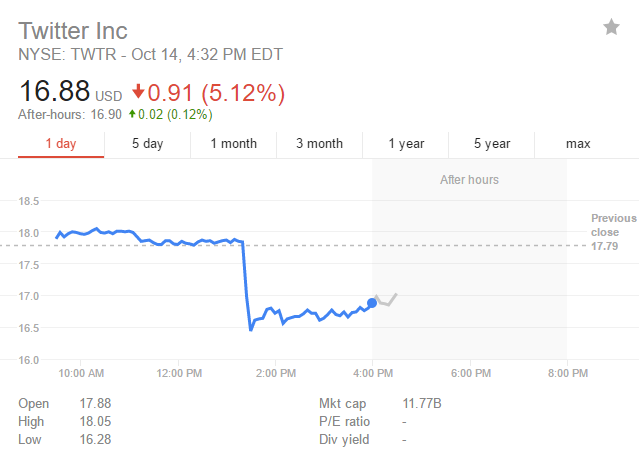 It looks like no one is interested in paying more than $10-$15 per share for Twitter and I can’t say I blame them. I still feel like it has a lot of value given its cultural and media impact, but it’s not really worth $20 billion dollars. Any more than $10 billion is likely too much risk for an outside company to take on. Plus, there’s a good chance Dorsey fucks up bad enough that you can get it for even cheaper than that down the line. As you all know, I love Twitter and really want it to succeed, but I’m bearish on those chances under the current leadership. I do like some of the live streaming initiatives it’s taken as of late (presidential debates, NFL), however we need to see a lot more.

I’d also like them to merge Periscope capabilities with the regular Twitter app and allow PC users to stream to the service as well. It’s sort of mind-boggling to me that they resist doing that, but whatever. Perhaps there’s some technical reasons I don’t know about, but it seems like a no-brainer from the outside.

UPDATE: It looks like Twitter is starting to make some of my longtime suggested moves with Periscope, however live-from-PC capability is only open to “content creators” at this time. I have personally applied for acceptance, so we’ll see what happens on that front.