Tyler Malka, Frontrunner for Scumbag of the Year 2015

OK, here’ my much delayed commentary on Tyler Malka. I’ve been intending to write about him for the last few days, due to his recent comments. Longtime readers will remember the multitude of reports we did on not only his low life behavior, but also the sad state of affairs there at NeoGAF. He’s accused of using his influence to ban girls who wouldn’t hookup with him, a prominent poster intimated that C.H. Sommers was a “house nigger” simply because she didn’t go along with the SJW program. And just recently we saw him unjustly ban a whistleblower there at the site. Oh, and did I mention that he allegedly sold user content to Kotaku without permission? Long story short, this guy has no room to be talking shit about anybody. But that didn’t stop him a few days ago. Here he is with Kotaku’s resident butt-boy Jason Schreier: 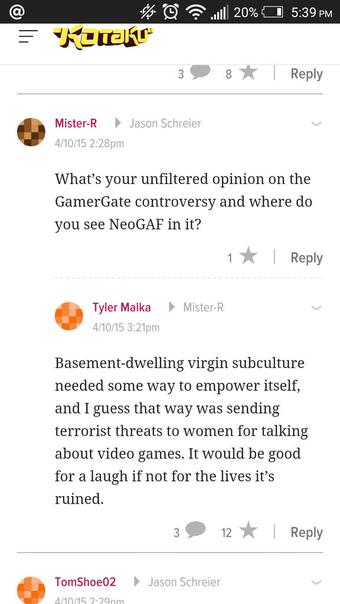 Basement-dwelling virgins? I don’t think I could possibly find a bigger creep than you, Malka. Let’s take a look at the record: You allegedly assaulted a woman in Spain. You were also alleged to have leaked nude pics of another woman. Just what else is there, Malka? It makes me wonder how many other women might be willing to step forth.

Here’s some the stories that TheRalphRetort.com has done so far on NeoGaf and Mr. Trevor Malka:

Oh, and here’s a poster you let get off with a ban:

I can’t even work them all into regular text, because there’s so damn many of them. Just take a look at some of those posts, and you will begin to understand why he hates GamerGate so fucking much. I know I would despise a movement that had exposed me time and time again. It’s only natural. But what ism’t natural, is your creepiness towards women, and the authoritarian way you operate your board (not to mention selling user content). I’ve also heard rumors about payola in exchange for favorable coverage through sockpuppet forum accounts and the like, but that cannot be confirmed.

Either way, this lowlife has a lot of nerve talking shit about about GamerGate, when he has soooooo much shady shit in his life. I would advise him to keep his trap shut and stay out of sight, before he gets hit with a subpoena. We’ll keep an eye out on the fucker regardless.