Spiked, a UK online magazine focusing on free speech issues, recently dropped a Daisy Cutter-sized truth bomb on the UK campus crazies that, in lockstep with their batshit brothas and sistas at US universities, are trying their best to revive some of that old historical spirit of 1938. Remember the days when universities were the bastions of free speech and free expression? When students in Berkley, Paris and London shed their blood on the streets to fight for freedoms?

Yeah well… that was yesterday chum. Welcome to 2016. Freedoms are so old fashioned. Now its time to drag out the festering corpses of Joe McCarthy and his blacklists, the USSR and its brutally enforced policies of approved authors and speakers, and the Nazi Party circa 1938, complete with book burnings and mob violence against ‘the other’. Freedom is so old hat dude….we, the students of today, want authoritarianism and censorship…and we want it NOW!

Spiked have been surveying UK universities in respect of freedoms of speech, assembly and expression for the last two years, and the picture that was worrying in 2015 has become the nightmare of 2016.

The survey ranks universities by a traffic light system – Red, Amber, Green – depending on just how censorious the University administration and University Student Unions are. Green is happy gumdrop forest territory where the bodies interfere little in what goes on, whereas Red is “Welcome to the USSR, comrade” land…..check your freedoms at the reception desk and prepare to be audited for privilege infection. Amber is somewhere in between…..and that’s a big band of possibilities thrown in there.

And the results….well take a look chums. As you can see, what was a relatively grim picture in 2015, with 41% of universities falling into the Red category, has got much much worse in 2016, with 55% now ranked as Red. At the same time, the minority percentage of universities that were free speech havens in 2015, 20% of universities surveyed, has halved. 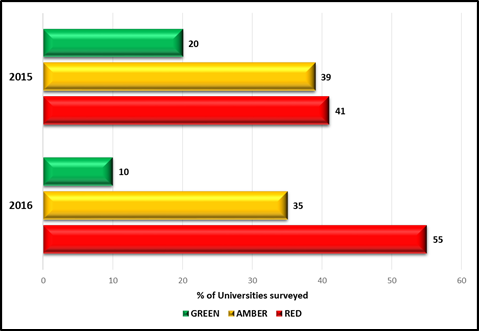 And who, you may ask, is responsible for the rise in censorship? Well, according to Spiked it isn’t the University administrations. Of those, only 15% are ranked in 2016 as being in the Red. No… it’s the Student Unions and their crazy as hell uber-PC committees and management. Of those surveyed in 2016 62% are ranked as Red. That is almost two thirds. TWO FECKING THIRDS!

Then we get down to the specifics. Of the 115 UK universities reviewed in 2016:

Tom Slater, Deputy Editor of Spiked, sums it up as follows: “Campus bureaucrats don’t even trust students to dress themselves, let alone think for themselves,” he continued. “Campus censorship has become institutionalised.”

Well chums, here ends Part 1 of this greasy horror show. In Part 2 I will take a close look at the worst five universities where banhammers are the weapon of choice – Aberystwyth, Leeds, LSE, Swansea and Edinburgh – as well as a head-in-hands look at my old alma mater Keele University.

Buckle up me buckos… this is gonna be one hell of a roller coaster ride and there ain’t no breaks on the crazy train.