Some days, my Twitter addiction is rewarded. Not only do we have the worthless @_icze4r sperging out left and right, proving everything I’ve ever said about the loser was dead on the money. Something even more amazing has happened over the last couple days. Suey Park, the notoriously bitter and vicious SJW behind #CancelColbert, has come out and renounced her storied past as a key member of the outrage culture. She even retweeted a GamerGate member who had paid her a compliment on her admittedly good looks. She seems so peaceful now that I’m tempted to believe her ass.

Take a look at the screens: 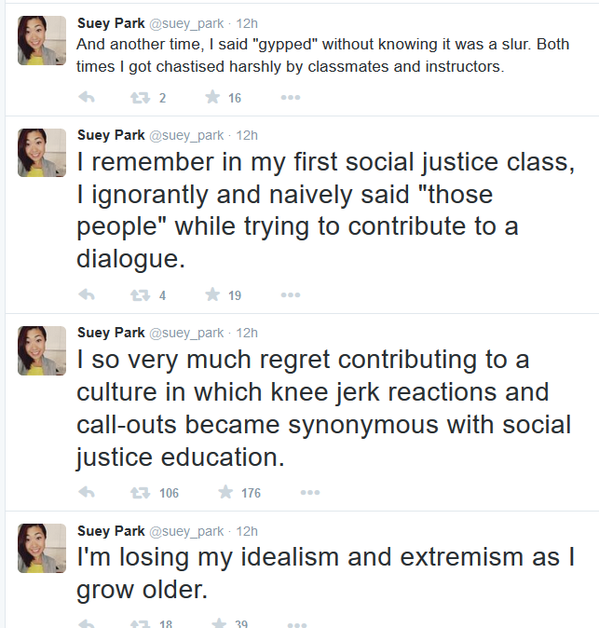 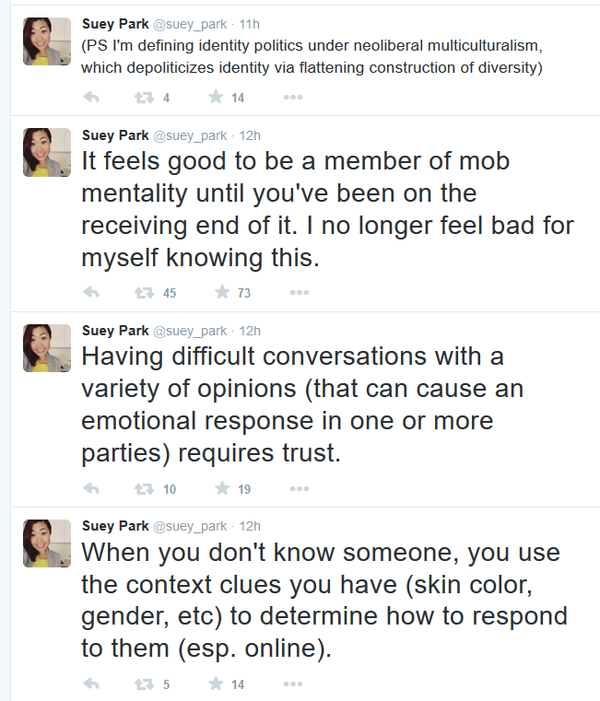 She sounds like she’s been giving this transformation a lot of thought. Apparently Suey’s been getting attacked recently herself. Here’s some of that from July:

It looks like Park is alleging that @ChiefElk (another notorious SJW) had hacked her ex’s phone in order to read the text. I have no idea what happened here. Hell, I didn’t even know it had occurred in the first place. I’m not able to keep up with every single one of these loons 24/7, 365. What about Ms. Park, though? What else went down on Twitter today? Well, as I mentioned at the top, a GG’er decided to pay homage to her looks now that she seems a bit more reasonable:

Lol, everyone knows Suey is fine tho, c'mon. I had people confessing their thirst last fall even.

I could have scarcely imagined this just a few months ago. I do remember her blowing out Arthur Chu last fall, though, which was amazing. I hoped to prod her in that direction once again:

I still didn’t think we would see her change this much. I doubt she’s renounced all her views, or anything like that. But she seems to be a lot more sane and balanced if you look at her feed. Is it for real? Who the fuck knows? I  can’t say for sure, although it certainly looks like she’s following in the footsteps of Ian Miles Cheong. Suey probably won’t go as far as him, but we’ll see. The public rebukes she issued to her old compatriots still count for a lot. If someone who was in as deep as Ms. Park was decides to leave the SJW Cult, then you know they’ve seriously went right off a fucking cliff.

Hopefully her transformation ends up sticking. Lemme know what you think down below, in the #BasedCommentSection.