Sometimes you see a guy get banned from Twitter and all you can do is laugh. Don’t get me wrong, I’m for free speech, so I hate to see almost anyone get tossed off social media. But when you threaten to shoot-up a tabletop store like unskilled troll Andrew Gleason (a.k.a. Otter Jesus) did, you have to expect that your account will get terminated. That sort of thing is always going to draw heat, for good reason. It doesn’t matter whether or not it was a joke or a real threat. With the environment surrounding shootings here in the US, this is extremely incendiary material. I don’t blame Twitter for getting rid of people who do this sort of thing.

How can anyone think this kind of comedy will be allowed to fly? According to sources, Gleason has mental problems and a history of being sexually abused. Still, Twitter is right to step in and drop the hammer (they might also want to check out his new account). I mean, doesn’t this sort of guy perfectly fit the profile of a mass shooter? Look at him. He has that Adam Lanza Gaze going on. Oh, and he claims to fly under the GamerGate banner as well. Talk about bringing shame to a legit movement. 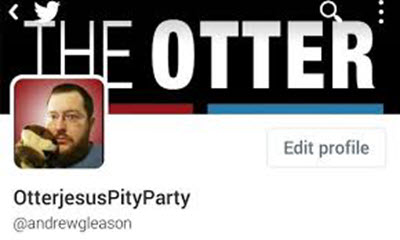 So while I usually disagree with the Twitter police, this time I have to give them some props. Taking mentally deranged people like this out of general population is a good thing. Now perhaps his local authorities will do the right thing and place him in a mental institution so that the surrounding areas will be just a little bit safer.

UPDATE: Mr. Gleason has come out and confirmed the authenticity of the headline after first trying to say it was a lie. I know a lowlife like him likely won’t apologize for the false accusation, however I thought it best to leave it here for the record.