Unless you’ve been living under a rock, you’ve already heard about the Rolling Stone news from last night. If you haven’t, that’s what I’m here for! Long story short, they finally retracted the UVA rape hoax story. I saw the news coming in live last night, but I got sidetracked with the PC Gamer story and some stuff on Twitter. But let’s take a look at all the reaction I’ve gathered so far. I’ll give some thoughts along the way. You know the fucking routine by now.

First, the reporter’s name is Sabrina Rubin Erdely, and she’s bound and determined to blame anyone but herself for this massive failure:

Apologies to readers and rape victims, but not the people she smeared as rapists. Classy, @SabrinaRErdely. pic.twitter.com/j9qozyM06F

Columbia University’s Graduate School of Journalism conducted a review of all this, and it wasn’t pretty. Erdely comes off looking even worse that she did with that weak-ass apology: 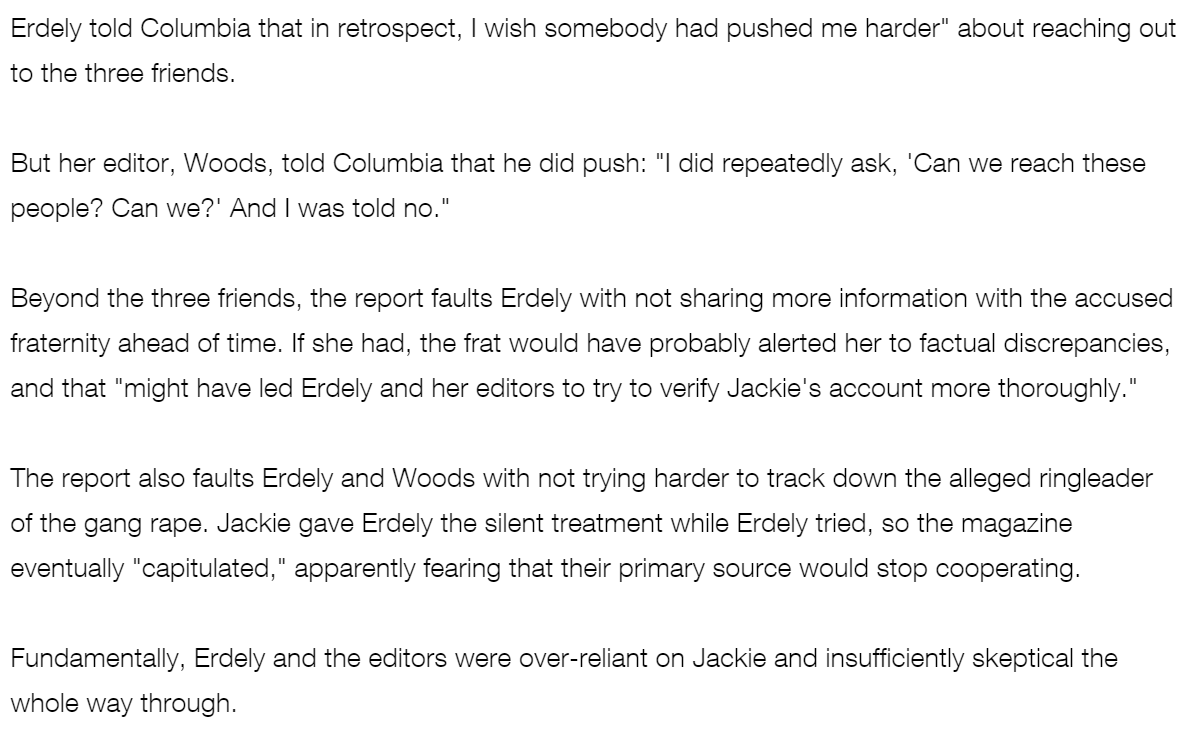 So, with all this disgraceful behavior, one can only imagine that Rolling Stone is about to clean house. Erdely’s getting shitcanned, and so is the editor. Right? There’s no way they could possibly let these people stay on staff, unless they want to look like a complete laughingstock. Oh, that’s right. I forgot. SJWs never have to answer for their transgressions. Only white males…

This cowardice went over about as well as a lead balloon:

Prez of @UVA just now: @RollingStone story "did nothing to combat sexual violence, and it damaged serious efforts to address the issue…"

"It makes you wonder ‘well, what do you have to do to get fired?’ @brianstelter on @RollingStone report & aftermath pic.twitter.com/zdU1YUIhrA

Yes, it really does, Brian. Who else weighed in? Here’s a Poynter post that will be updated as more reaction from journalist-types rolls in, a student editor from UVA saying that we shouldn’t let fact-checking define this incident (SJW cultist), and more tweets:

Jann Wenner once fired an editor over a negative review of a Hootie & the Blowfish album. http://t.co/UtYnp2rFtJ

(Jann Wenner is the co-founder and publisher of Rolling Stone. Basically, he’s the HNIC)

Here’s a Gawker crybaby that I just saw while compiling this story. The salt will be flowing all day long, so expect updates:

This whole episode perfectly illustrates how radical feminists are leading us right over a cliff. They claim to care about rape victims. They have a funny way of showing it, don’t they?  All their time is spent peddling dubious claims and practiced outrage. I understand that this makes a lot of them fabulously wealthy, but it doesn’t do much to help the victims of sexual assault. In fact, it does the exact opposite. It makes it more likely that people will disbeleive truthful woman in the future. That should sadden anyone with a conscience. I haven’t seen much evidence that these “professional feminists” have one of those, though.

I have to take a family member to a doctor’s appointment. I’ll certainly update this post later on today, though. There will be much more reaction, plus I just scratched the surface from last night. Stay tuned, and thanks for reading. I’m now about to go watch the rest of Jim’s video while I sit in the waiting room.

UPDATE: When Vox is calling you out, you know you have some major problems:

Rolling Stone’s article on an alleged gang rape at the University of Virginia, “A Rape On Campus,” failed at the most basic task in journalism: telling the truth…

The cardinal sins in journalism are plagiarism and fabrication. Yet, as Erik Wemple writes at the Washington Post, they’re often victimless crimes. While making things up at the New Republic, Stephen Glass created characters that played into harmful stereotypes. Jayson Blair invented reporting trips that never happened and conversations that never occurred. Both lost their jobs, as did the editors who oversaw them.

But neither Blair nor Glass accused dozens of people of being accessories after the fact to a gang rape, without evidence. No one at Rolling Stone has been fired, and the magazine has said that no one will be…

The actual findings in the Columbia Journalism School report are shocking. But what’s arguably even more surprising is how Rolling Stone’s editors have reacted: with the verbal equivalent of a shrug.

“If this story was going to be about Jackie, I can’t think of many things that we would have been able to do differently,” Erdely told the Columbia investigators.

They aren’t the only ones. Lloyd Grove continued the beating in The Daily Beast:

In the Columbia University Journalism School’s 13,000-word postmortem, filled with incriminating details about Rolling Stone’s now-retracted campus rape investigation, the most incriminating detail is that nobody at the magazine seems to believe that its reporting, editorial, and fact-checking practices are in need of serious reform…

[Rolling Stone publisher] Wenner “acknowledged the piece’s flaws but said that it represented an isolated and unusual episode and that Ms. Erdely would continue to write for the magazine,” the Times reported. “The problems with the article started with its source, Mr. Wenner said. He described her as ‘a really expert fabulist storyteller’ who managed to manipulate the magazine’s journalism process. When asked to clarify, he said that he was not trying to blame Jackie, ‘but obviously there is something here that is untruthful, and something sits at her doorstep.’”

Wenner’s attempt to assign responsibility for the bogus story to the alleged victim—rather than the journalists on his payroll—echoed Dana’s initial reaction when the story began to collapse.

So many basic journalistic tenets were kicked to the curb as Rolling Stone last November published what purported to be a tale of both a chilling crime and a deeply flawed culture at a prestigious university. The story has completely collapsed, leaving the article’s author, Sabrina Rubin Erdely, the magazine’s editors and fact-checkers and Rolling Stone itself as collateral damage. Not to mention the frat house…

[T]he response of key Rolling Stone personnel suggests that they still don’t grasp the enormity of what transpired.

Publisher Jann Wenner told The New York Times that Erdely would continue to write for the magazine and that the article’s editor, Sean Woods, and managing editor Will Dana would remain in their jobs.

Despite the rampant breakdowns spotlighted by report, Dana doesn’t see the need for structural reforms. “It’s not like I think we need to overhaul our process, and I don’t think we need to necessarily institute a lot of new ways of doing things,” the report quotes him as saying. “We just have to do what we’ve always done and just make sure we don’t make this mistake again…”

What’s the point of launching such a far-reaching probe if you are not going to learn from it and act on its conclusions?…

Seeing this sorry episode as a one-off rather than a serious indictment of a system and those charged with running it is unacceptable.

As you can see, there’s a common theme among the Rolling Stone staff and leadership: “Don’t blame us, blame that crazy bitch Jackie.” Maybe that has something to do with the lawsuit coming down the pike:

I hope the fraternity gets a fatass settlement out of all of this. If the leadership of Rolling Stone was smart, they would have cleaned house and reached out to the fraternity with their own offer. Now they’re headed for an extremely long and costly legal battle that’s likely going to see them lose. I guess they could still end up settling, but the frat bros don’t seem to be in the mood for that at the moment. Who could blame them?

More from Twitter, then I’m out. Check back later for more stories. I’ll continue updating this post as necessary:

UVA student activist Alex Pinkleton, on @CNN TV, asked abt @SabrinaRErdely: "I'm not sure who would trust her, at this point, with a story."

“@BV: .@asymmetricinfo: Everything Rolling Stone got wrong — even its apologies. http://t.co/KUwYAJBWCR” Excellent piece on #UVAHoax fiasco

When the facts change, I change my opinion. What do you do, feminists? #UVAHoax

“just because I made up my story about being raped doesn’t mean it didn’t happen. not accepting my headcanon is patriarchal.” #UVAHoax