VICTORY: Alleged Pedo Moderator at NeoGAF is Relieved of Duty by Tyler Malka

As you know, NeoGAF is a shithole. Like I told you a couple days back, it’s not just your average bad place. It’s actively evil in a lot of ways. From selling user content without permission, to openly racist statements, to promoting and encouraging the pedo lifestyle. There’s a lot there, is what I’m saying. Today, we’re talking about the latter angle again. I’m kinda surprised to be telling you this, but for once, Tyler Malka has done the right thing. I realize that it was only when he was forced to at the barrel of a gun, but still…credit where credit is due.

Here’s what happened. Someone dropped a major bomb on the moderator who calls himself Opiate. This is the same clown who always talks about pedophilia. Oh, and he’s the same guy who berated an actual survivor of child abuse this week because they weren’t showing enough respect to the pedo lifestyle. Yes, I shit you not. That actually happened. Thankfully, he was repaid in full for that fuck-up. Take a look at what was dropped on his ass: 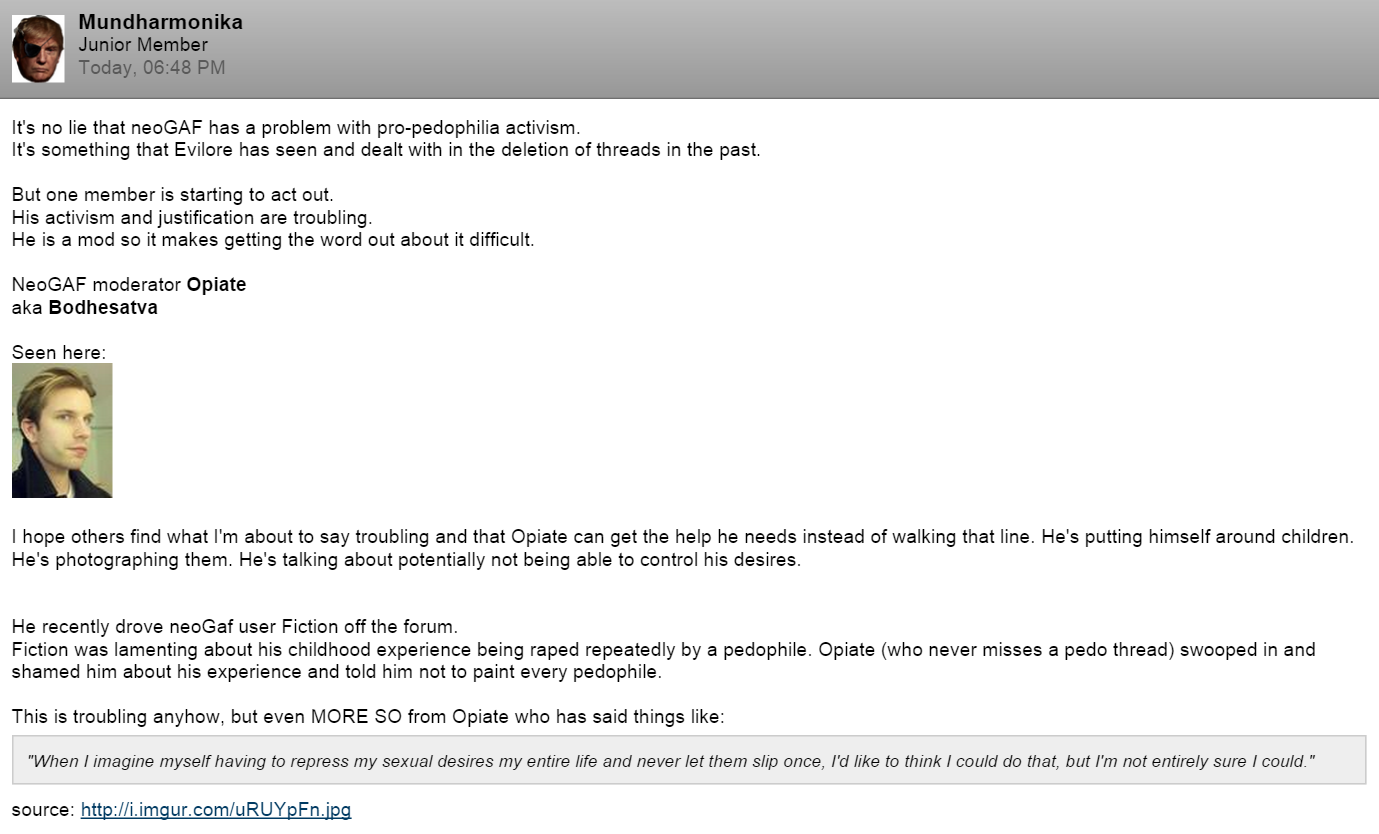 As you can imagine, this caused quite a stir…for the 11 minutes it was left up. Originally, I thought the post would just be taken down and ignored, like all the other dirt the watchdogs over at NeoFAG put out. All the things they’ve presented have been 100% true, it’s just that Tyler Malka (owner of GAF) usually just sweeps it under the rug. But, I guess some sponsors caught wind of this latest episode, because for once, EvilWhore didn’t ignore:

In case you don’t want to pull up the image, here’s the text:

NeoGAF is a forum full of real people, not an imaginary world where dispassionate academic debate can take place and anything can be said without affecting others. We shouldn’t be having threads like this inappropriate and pointless debate about pedophilia in the first place, and we will not from here on out, but while we can’t control how someone reacts to the content of the site and whether they decide to leave, and we shouldn’t coddle anyone for the sake of it, this thread has gone far, far beyond anything that can be described that way. We can at least be a little respectful to our fellow members when it comes to serious matters like personal experience with being the victim of child molestation/rape. Clearly a basic level of human decency hasn’t been maintained and that will be addressed immediately.

Apologies to Fiction for everything that was said in this thread and how things played out overall.

So, for once, I have to tip my cap to Malka. Even though I’m sure he only did this for his own gain, it was still the correct course of action. Also, he didn’t explicitly say that Opiate was removed, but you can go check the page where the mods are listed for proof. Here’s the list from the summer. If you go look at it today, you can see that the pedo-loving Opiate has been bounced. See ya later, Chester the (alleged) Molester.

I’ll be back during the overnight hours with my thoughts on Blowey Zoe’s U.N. presentation earlier today.