For the past year now, Gamergate has thrived on many different levels as far as gaming is concerned. Recently Brianna Wu, the head of Giant Spacekat studios, and creator of the game Revolution 60 co-wrote an article titled: Metroid’s Samus Aran is a Transgender Woman. Deal With It. Now if you’re like me and you can smell an agenda a mile away, you’ll be sure to know that’s what this article was—an agenda—that she intended to capitalize on drastically. In the article, Brianna elects to say that Samus Aran of Nintendo’s Metroid series is a transgendered woman, and that was that.

In the body of the post, she states that when J.K. Rowling said that Dumbledore of the Harry Potter was gay that was the end of the discussion. Honestly? We can accept that because J.K. Rowling wrote the character and the story. Brianna Wu did not write Metroid, or work at Nintendo, ever. Of course the article was met with harsh criticism, and even more come when Wu published the follow up piece: Well, that escalated quickly: A Samus follow up was launched two days later.

This time Wu was on the defensive, and she came out guns blazing at her critics she labeled “Geeks.” I should tell you it comes as no surprise to hear Wu lecture her audience as if she’s a wise cricket giving great wisdom from the mountain peak. She says that gamer’s reactions about the possibility that Samus could be Transgendered is very important.

Wait a second, didn’t you confirm in the article just 24 hours prior to your follow up that Samus is transgendered? Hmm…strange.
She begins to unravel early in the piece by stating that:

I Google searched the arguments, saw that there was no mainstream periodical written about them, and decided to write Ellen Mcgrody to see if she wanted to compile her best argument for it.

She passed me a 1,200-word document with impeccable sourcing, and did a rewrite pass on it framing it in emotional, accessible terms so lots of people would read it.

And lots of people did. Unfortunately, many of them proceeded to aggressively attack the two of us.

She claims that the blowback she and Ellen Mcgrody received weren’t about the merits of the arguments they were making, but rather it was about “geeks” not being able to accept the idea that Samus could be transgender. This was not, and still is not true. The blowback was because she was disingenuous to people.
Let’s clear a few things up about this section really fast folks. I’m going to call this:

Let’s start at the beginning, with the byline. Brianna Wu’s name is first on both pieces concerning the debate gamers have with this issue. She didn’t do anything other than tighen up the story, and dress it up to look more presentable. She said it herself:

She was only ever interested in the clicks and ad revenue that was generated from the article. She never cared about the opinions that would be come during the backlash, or the sincere confusion that it would generate for fans of Metroid. Moving right along, she used two sources for the article that she calls impeccable: A copy of Nintendo Power, and that guy’s statement on New Half for Samus. That’s it. I don’t know about you, but I’d have more than two sources before I came out with something about a franchise character everyone knows about globally. But the article did its job, and very well. It got over 10K views, shares, likes, RT’s etc. Ellen Mcgrody and Brianna Wu became transgender and feminist heroes…for about 5 hours.

Once the article went south, Brianna Wu did what she does best: Bail with the only parachute. Ellen Mcgrody was left to defend herself alone, while Brianna Wu claimed in her follow up piece that she only assisted in the creation of the article. She didn’t actually involve herself beyond touching it up and presenting it to The Mary Sue. Now obviously, because The Mary Sue is a crap outlet, and wouldn’t dare let one of their own (fellow feminists) be harassed, they moderated the comments so you’ll never see what people had to say in protest.

Ellen McGrody is left to the firing squad

Once Brianna Wu realized that she needed to play damage control, she left Ellen McGrody to be shot alone. Fans weren’t nice to her, at all. She was up for over 15 hours dealing with the trolls and harassment the entire time, and Brianna refused to acknowledge that she was having a hard time.

It was so bad that at one point, Ellen ranted saying that everyone’s fav characters were trans and that was that! It’s quite understandable that she was upset, more so at Brianna than anyone else. Honestly I’d never work with her again. 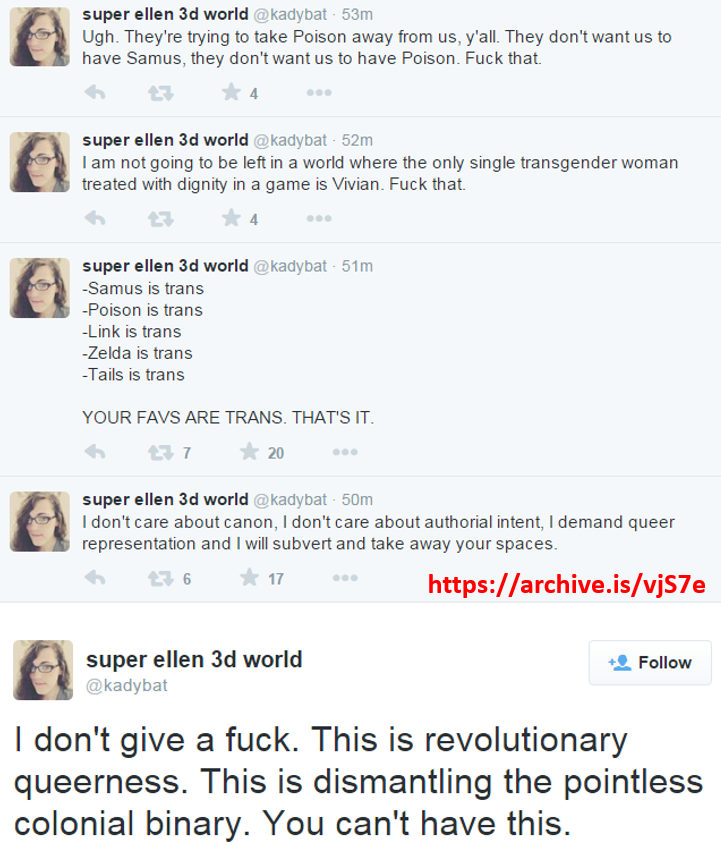 We get thrown into the Samus situation

Honestly I didn’t even see myself getting involved in the dog fight over Samus with The Gaming Ground, since we reached out to Brianna Wu and Nintendo for comment on the situation. Nintendo responded within 24 hours, Brianna Wu didn’t. I found myself reading an article by Jef Rouner of the Houston Press about Samus titled: Why Entitled Male Gamers Can’t Stand Critiques of Samus Aran.

For those of you who don’t know, Jef Rouner is a hack journalist. He went after or Editor in Chief Robin for his piece on Tifa Reinhart in Final Fantasy Vll. It was a blatant attack on his opinon and nothing else, if you read that piece you’ll see. And just as it was then, this was an attack for clicks on his article.

(He also sent a picture of his young child to the notorious pedo Sarah Nyberg in order to “cheer her up.”)

I sent a private email to Wu stating that she should apologize to McGrody, to us the fans, and the rest of the world for fabricating a story with no ground to stand on. She didn’t like that, at all. She had her system admin contact Robin (at The Gaming Ground) and state that she wouldn’t comment on his question he’d asked her over a week ago about. It doesn’t matter, we don’t care.

Now if you go read that article, you’ll notice how it’s a polished version of Brianna Wu’s article, including some of the same screen captures as well. Coincidence? Of course not. You see, after Brianna had the massive backlash she fell back onto what she always has: Screaming harassment and pointing at her Patreon button like it’s a life alert badge. Unfortunately, it worked. No one would have had a problem with Wu’s statement about Samus, if Samus was her intellectual property like Dumbledore is J.K. Rowling’s. Or if Wu was the creator of Samus or designed her—fine—no problem! But she isn’t the owner of Samus, so yes—we had issue with it. Guess what? We still do! And no, it’s not transphobic because we can’t imagine her as transgender.

Brianna Wu has had a wakeup call finally and it’s not necessarily the good kind. I’ve never backed down from a challenge. She lives on Twitter and constantly libels people. All you have to do is search her archives and you’ll see it’s all there.  Follow the money, and it all becomes clear as a bell. And that bell is resonating in our hearts, ready for fans to strike it until it lets freedom ring, and destroys the bullshit Brianna Wu fills the ether with

Give us your thoughts in the comments, and share this article if you believe in it.