Why The Feminist Wonder Woman Film Will Bomb 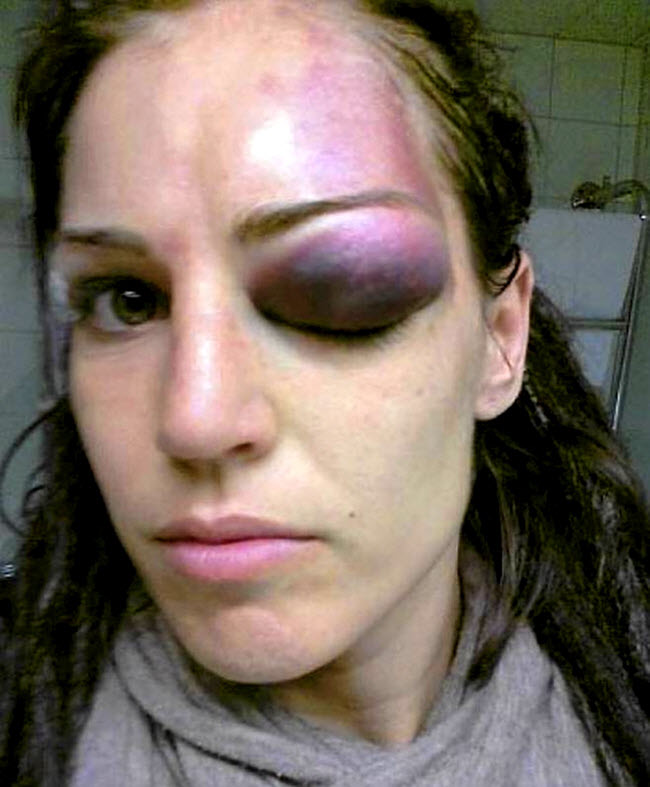 What is more upsetting is that I punched Eva. She is so weak she can’t punch me back and I’ve enjoyed every minute of domestic violence I have inflicted upon her all these years.

Look at poor little Eva’s face, all swollen and deformed. You can tell she did not like it when I forced her look at the camera with that child-like face of hers.

To be honest, I have zero regrets about punching Eva. She was asking for it.

I actually quite enjoy beating her up because it gives me long-lasting erections.

Now, look at these guys:

By the way, I also punched all of the guys above. Yes, my erections were even stronger.

See? There is this raw and impulsive concern for injuries sustained by a woman. But guys? Nobody panics.

Maybe you are still upset I said I punched Eva, but possibly, you realized what I meant when I said I also punched the guys.

Truth is, I lied to trigger your empathy gap.

I lied because I have never met Eva Wahlstrom, she is a professional boxer and her black eye was a result of fighting another woman. I never punched any of the guys either*.

See, I lied to see how you would react, most likely many of you reacted as expected but will not confess to it.

See, that is the problem with the feminist Wonder Woman film, she will never look as authentic as real female warriors like Eva Wahlstrom.

The appearance of wonder woman in Warner Brother’s “Batman V Superman” was ornamental at best and a waste of money driven by feminist ideology at worst. In a film world of fantasy you really have to work hard to lose credibility as fantasy and the Wonder Woman Character is one of those examples. Even as fantasy, Wonder Woman played by Israeli actress Gal Gadot failed to live up to any female MMA warrior.

Even little 6 year old  girls can see the stark differences between a female MMA fight punch and one by Gadot’s Wonder Woman. One is real the other one fails to even convince a child.

It is like children that want to wear a spiderman costume on Halloween to feel like spiderman and superhero movies are an extension of that. Whether adults want to admit to it or not, it is the rule of the hero’s journey and how audiences place themselves behind the hero.

Logically little girls will want to dress up like Wonder woman for halloween but the problem is the big girls who have never become adults, those are the ones that end up cosplaying like retards and believing the lie of women being “powerful” without even training like a man. The logic works for children but it should not for Tumblrettes.

In principle, female characters like wonder woman use actresses like Gal Gadot to pitch the message of “relatability” to childish female audiences.  To milk money out of their stupidity but the problem is, solo female superhero movies have a consistently bad track record of bombing at the box office.

By the way, the Hunger Games is a work of fiction based on a book not a superhero movie. Feminists love to mix them to try to give themselves imaginary validity but to date, solo female superhero movies have been financial failures, 2004’s Catwoman was a clear example:

2004’s Catwoman is what happens when you let your investment be controlled by feminism: You lose your money.

Everything from casting a “brown-minority” actress to the costume design was a social justice-driven failure waiting to happen. The movie did not even make its production money back.

Both made the mistake of casting the wrong actress for the role. On one hand Halle Berry was cast because she was brown, and on the other Gal Gadot was cast because she is from Israel. If you put two and two together, let’s assume the producers also have strong ties to Israel so they may have made that decision based on their patriotism not sound capitalism.

This is not the only mistake they have made, the production of this feminist film has been a collection of dumb ideological decisions from its very beginning.

WONDER WOMAN IS A ROAD TO FAILURE

It is not a secret the Wonder Woman project has had a lot of false starts and lots of directors attached to it. It makes sense, it takes a lot of overpaid people to polish a feminist TURD before the studio realizes a feminist TURD will always stay fecal, but WB is a specially deaf and blind kind of studio, so much so they green-lit this wonder-feminist TURD.

They finally managed to convince Michelle McLaren (famous for directing TV series such as Breaking Bad and Game of Thrones) but she ultimately quit the gig last minute by citing the classic “creative differences” But the real reason behind her leaving? Simple,

WARNER DID NOT WANT TO TRUST A WOMAN WITH THAT KIND OF BUDGET.

McLaren reportedly wanted to direct something as epic as Game of Thrones but the studio doubted she could pull it off and got cold feet. Wew…Warner, for a studio pretending to be pro-women that was truly condescending and anti-woman but true.

If the woman does not have the chops, she does not get the job so eat your heart out Jezebel writers. Too bad that WB’s decision only proves the following feminist-unfriendly point: Female directors are expensive movie studio niche-pets that do not reliably make money at the box office.

BTW, remember Bigelow’s Hurt locker? Good movie but female directors don’t make money reliably and it made so little money at box office that the studio had to go suing torrent sites and its users. Yeah great business model, get money via settlements. Seems Wonder Woman producers will have to do the same to recoup some of the millions they will lose. If only they had chosen an actress that looked the part…

Look at those “wonder” spaghetti arms. Look at that anemic and leathery neck. Let’s not sugar coat it, Wonder Woman is not supposed to be anorexic and Gal Gadot was miscast. There are so many attractive and well-built unknown trained actresses that could have been cast for a fraction of the money paid to anorexic Gal Gadot. To top it off, Gal Gadot is a terrible role model for little girls who may end up with a higher tendency for eating disorders.

Casting anorexic Gal Gadot really makes you wonder how delusional the producers were to think something along these lines would work:

Granted, they forced Gadot to train and eat but again, it does not matter how much you polish an anorexic TURD like Gal Gadot, the TURD stays anorexic. There are many many other problems beyond her anorexia though…

Another giant problem female superhero solo movies and female characters in general have is that they lack both physical and character flaws therefore they lack even imaginary credibility or, in other words, they suffer from the “black widow effect”.

Here is the inconvenient truth: Feminist Movie directors are afraid of simulating realistic damage to an actress because it hurts the sensitivities of the feminist audience and also hurts toy sale$. People do not want to see women suffer because they look like children.

The result is female characters that look superficial even when compared with imaginary characters like Ironman or Captain America.

Let that sink in, female characters are so weak that they even look fake in a fantasy world.

Female characters need to be “grounded” by the male sacrifice on-screen otherwise characters like Black Widow will turn into full sailor moon characters. They are too flawless and often success and empowerment is given to them, they do not earn it.

Wonder woman will suffer from exactly the same “Black Widow” effect because you can tell the studio is somehow playing it safe to try to make some of their money back out of their wonder-feminist TURD garbage fire.

However, just for the sake of argument, imagine if the studio had had the balls to portray a true MMA-like wonder woman, one without feminism, one true female warrior that earned her success instead of being “empowered”. Imagine a Wonder Woman without feminism.

You will never see a wonder woman with realistic battle wounds (even wounded game characters like Tomb Raider’s Lara Croft look more realistic) or a realistic battle suit. Obviously, the suit they designed is specifically made to sell toys but it would also be obsolete in battle. A realistic suit for battle inspired by the ancient Greek would look like a male soldier’s but if you start going that way, the presence of a female like Gal Gadot also becomes obsolete. The character really is a nightmare for any director.

The truth about female characters like Wonder Woman is that they are glorified Sailor Moon characters for children in the bodies of adults: Feminist women.

Feminists want wonder woman to “win” but what they forget is that enormous pressure they directly put on any given female director.

They already know full well female driven superhero movies have a dismal track record at the box office (AKA things like the fecal Berry’ Catwoman) plus, female directors do not reliably make successful movies and instead are niche-pets of the industry. To top all of that off, they put all that pressure on a pet-niche female director? That is either sadistic or more likely just delusional.

A sound business decision would have been contacting a competent mangina with a track record of printing money to direct their feminist fiasco, someone like Joss Whedon.

The guy is a complete feminist drone that sympathizes with Anita, but to be fair, he knows how to make money. That is exactly what business is all about, you put the ideology aside and you take people’s money but the studio still went with a female director.

Why would a studio douse their money with feminist gasoline?

Furthermore, after the partial failure of Batman v Superman, it was in Warner’s best interest to produce a box office hit not a bomb.

This is what is truly baffling about Warner Brothers: they are working on feminists acts of faith, not sound business decisions.

They knew the odds were stacked against ANY female director of their choosing yet they still decided to throw their dollars to the garbage fire of feminist movies. These rich DC/Warner Brothers people are not only delusional but stupid.

Thank you for reading

*Mercedes Carrera is the one that takes care of my erections instead.

I saw a tweet today from Nick Fuentes, a colleague of mine.…

This morning, I woke up to an extraordinary claim being leveled against…