A Wikipedia admin by the name of HJ Mitchell indefinitely banned me today apparently because of my pro-GamerGate comments that I made off-site. A little background about who I am and why this matters: I have worked as a freelance gaming journalist for the last six years. I had a column on Examiner.com with over seven million views and currently contribute to MMOsite.com, SuperCheats.com, and RealGamerNewz.com. I have also been an editor on Wikipedia since 2006 and was in relatively good standing in the community until an incident involving GamerGate in November. I even had rollback rights, which are not given out to just anybody, so that goes to show that I was a trusted editor and had done a lot of good work on the site.

The problems began at the end of November when I made an edit to Anita Sarkeesian’s talk page asking if her article should mention her work history with Bart Baggett who is listed in a pickup artist directory. This would seemingly contradict her values as a feminist and seemed important to mention about someone seen by many as the face of modern feminism in entertainment. Obviously being aware of the controversy surrounding Anita, I wanted to go the safe route and first discuss the change on her talk page, not simply edit her actual article myself. I cited my information with a reference to an archived page of Anita’s own website.

That’s when a user named NorthbySouthBaranof censored my comment by removing any mention of Bart Baggett and also deleted the URL I cited. Almost comically, he then replied to my edit by saying I need to cite my sources. This was clear nonsense so I went to look at his contribution history and saw he had been making numerous suspect edits to various articles on feminists and GamerGate involved people. He seemed like a clear-cut case of a troll to me, so I left a message on his page warning him to please not edit my comments again and reverted his censorship using my rollback rights.

He re-censored my post then threatened me with a block on my talk page as if he had the power to block people from editing Wikipedia (in hindsight perhaps he knew he had staff in his back pocket). I didn’t want to participate in an edit war so I immediately went to the admin notice board requesting help from the staff. At this point, I still believed I would actually get unbiased help. Boy was I wrong.

Much to my chagrin an admin named Kevin Gorman was the first to respond. Gorman agreed with NorthbySouthBaranof and revoked my rollback rights for allegedly abusing them. When I kept citing him the sources for my information to try to convince him the info should at LEAST be discussed on her talk page, he considered that to be repeated policy violations of a biography of living persons article (seeming to forget this was a talk page and not her actual article) and issued me a two week suspension from Wikipedia as well as topic blocking me from ever editing any article related to GamerGate again. In his topic block he invited me to appeal it on the admin notice board.

It is worth mentioning that Kevin Gorman is a noted feminist who has made numerous edits to articles about feminists on the site and has also been working on a Wikiproject called “Women in Philosophy.” His claims to be an “uninvolved administrator” were called into question by other editors which he simply shrugged off.

Not only did Kevin Gorman’s feminist background seem to bias his decision-making but he also pseudo-doxxed me by posting things I had tweeted about on Wikipedia. This is against Wikipedia’s policies and is called “outing.” He referenced several of my pro-GamerGate tweets as well as some tweets I made being critical of Feminist Frequency and Anita Sarkeesian. As a feminist himself, he did not like this. It is no wonder he didn’t want me to talk about her connection to Bart Baggett. It is no wonder he hastily blocked and banned me. Once again, some other editors called him out on his outing which he defended.

When I was unsuspended I did appeal my GamerGate topic block on the admin board. I mentioned that I have never edited a GamerGate article in my life – which is true. Talking about Anita Sarkeesian’s work history has nothing at all to do with GamerGate and if anybody were to look through my edit history they would see that even before that I’ve never edited anything having to do with GamerGate or even talked about it. So, therefore, I asked, why did Kevin Gorman apply a GamerGate topic ban to me? Normally when you appeal a block you need to provide diffs (links to page edits) as evidence. I couldn’t do this, however, because someone COMPLETELY DELETED all of the diffs of the discussion on Anita’s talk page. This is HIGHLY UNUSUAL. You can go through literally thousands of edits on this page and see that none of the other edits were deleted in this way. Even blatant vandalism is usually just reverted but the diffs are kept as proof the vandalism occurred. When a diff is deleted it is grayed out and stricken through so that you can’t even go back to look at it. 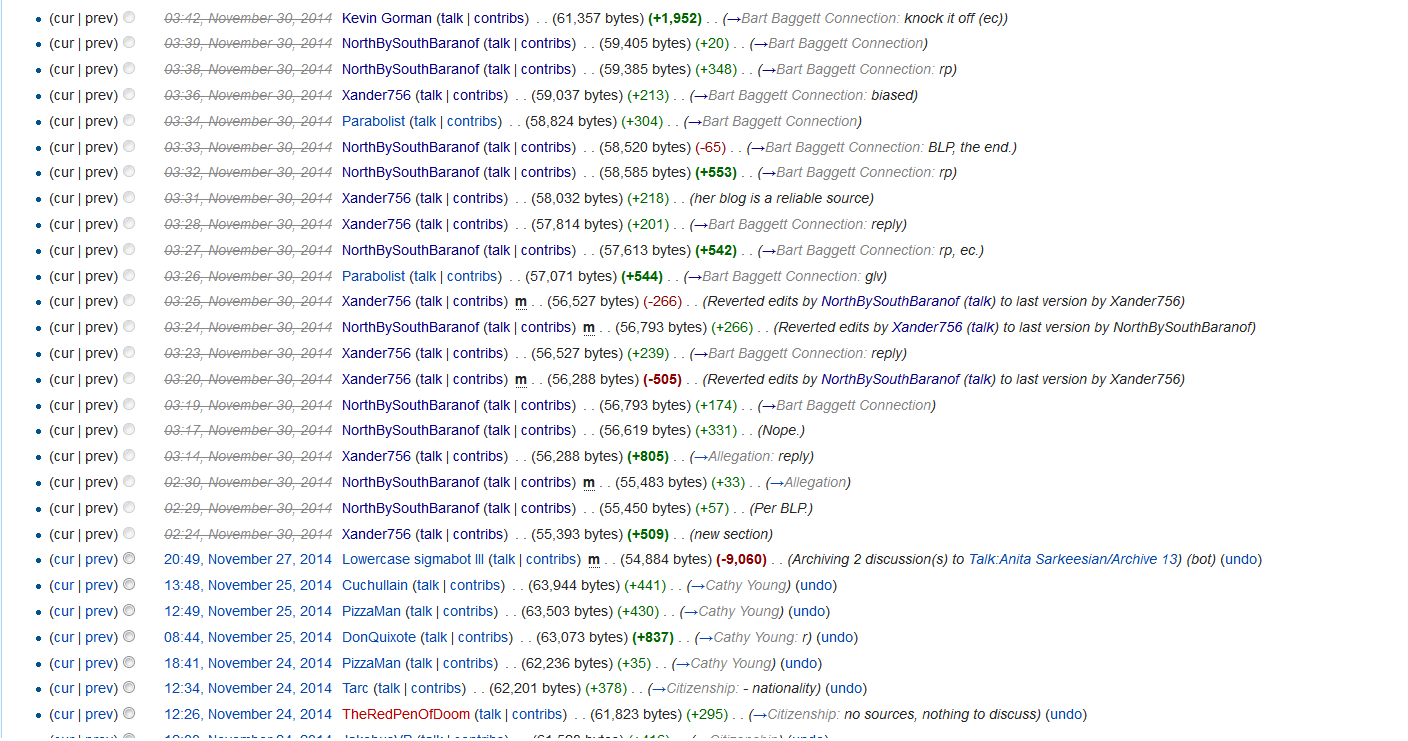 Mere moments later, admin HJ Mitchell DELETED my appeal and indefinitely blocked me from editing any page on Wikipedia. In his reasoning for the block, he said that I “repeated biography of living persons violations in which I was originally blocked for.” In other words, he claimed that after being unblocked I went back and edited Anita Sarkeesian’s talk page again. After all, that’s why I was originally blocked by Kevin Gorman. If you were to look at my edit history, and the screenshot provided at the top of this article, you would see this is a bald faced lie. I did not edit Anita’s talk page after coming back to Wikipedia. My only edits were to Kevin Gorman’s talk page, the talk page of another editor, my appeal on the admin notice board, and a statement on the GamerGate arbitration case which was requested of me on what had happened.

I would share the exact text of my GamerGate topic block appeal here but unfortunately I cannot because, like the discussion on Anita’s talk page, it was completely deleted from the site. This is even more unusual as I went back through hundreds and hundreds of edits on the admin notice board and found NO OTHER INSTANCE in which another edit was deleted in this manner. It makes one wonder why they are going to such extreme lengths to keep other people from seeing these things? 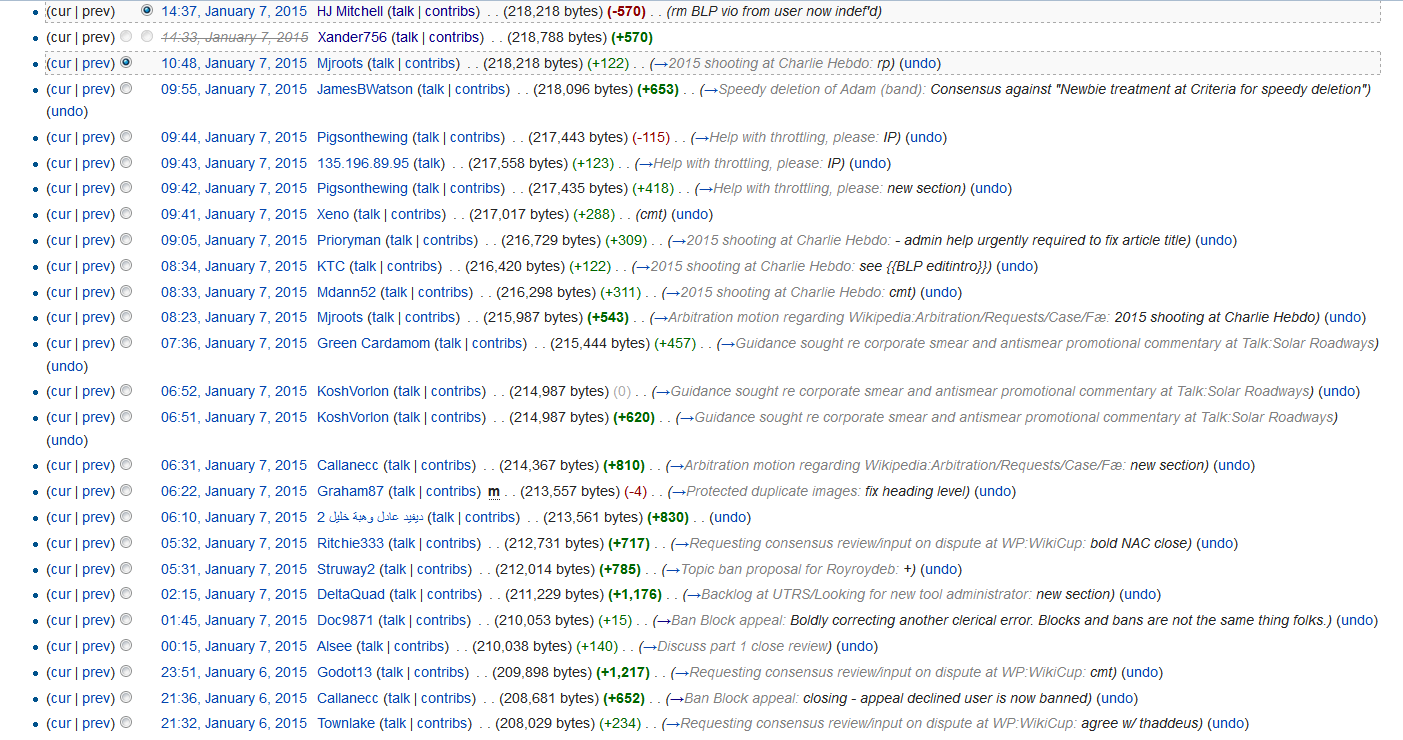 My statement on the GamerGate arbitration case was pretty much exactly what I told you about in this article – explaining what happened on Anita’s talk page with NorthbySouthBaranof and Kevin. Then my message on Kevin Gorman’s talk page was when I noticed he suddenly took an extended hiatus right after our interaction due to “health issues.” Finding that curious, I asked if he really was sick or if what happened with me might have had something to do with it. This isn’t really a “personal attack” as HJ Mitchell tried to spin it and judging by the fact he’s been calling me names on Twitter throughout the day, you really do have of wonder if he’s actually too sick to edit Wikipedia or if maybe he was forced to go on a break due to complaints of impropriety.

In summary, I got a GamerGate topic ban NOT for editing any articles about GamerGate on Wikipedia, but because I was pro-GamerGate on Twitter. Then when I appealed this unjust topic ban, I got permabanned for a reason that was completely fabricated. I have since appealed the new block via the ticket system but if this is how Wikipedia admins openly conduct themselves, I won’t be holding my breath for a fair verdict.