William LeGate is an interesting case study in how it’s not usually wise to lay down a challenge to 4chan, and the /pol/ board in particular. I’d seen LeGate around often, of course. He’s one of those losers who spams every single that comes from President Trump’s Twitter account. To me, this is signifies that one has no life and may be mentally damaged. I mean, I could understand doing it occasionally, in order to make a point or boost one’s own visibility. But day after day, tweet after tweet? It’s some kind of psychosis. I guess that’s why some of his compatriots have gone mental now that Trump (or his team) has started blocking leftist trolls.

Speaking of going mental, that’s exactly what happened to William LeGate. People started spreading around a photoshop of his large nipples (which were already fairly large before the shop) and this put him on tilt. Then, he tweeted out his own phone number, along with his address. It has been speculated that this was done after his account was hacked, but we can’t be sure. What we can be sure of is that his account is now deleted. We’ve seen this before, of course, so I wouldn’t be surprised to see him come back. 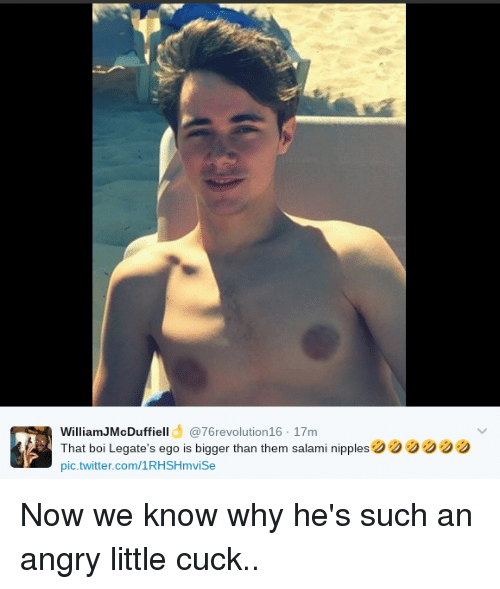 I think his brother would prefer that he didn’t, however…

I hope to see young William come back to Twitter. After all, without people like him to make fun of, Twitter just isn’t quite the same. He should understand that, given all the time he has invested in making fun of Trump and his supporters. What goes around, comes around.