In twenty minutes or so (5:30 pm EST), I’m going to be live on Kingofpol’s show to talk with Jace Connors. This is going to be an interesting chat. I still haven’t talked to him personally, despite the claims of the Daily Kos Doxer. According to Kingofpol, he is on his medications now. So perhaps he won’t be totally out there like he was in his last video. Only time will tell lol. Earlier today, Wu tried to blame all this on GamerGate. OF COURSE SHE DID! We’re clearly responsible for some random who is a known “eccentric.” I’ve never heard of this guy in my life, even though he is semi-infamous in certain corners of the Internet. I look forward to talking to him, though, and making it clear that I had nothing to do with all of this, and that GamerGate didn’t either. I’m going to be relaxed, though, and I’m sure Kingofpol will be as well. We don’t want to put this guy on trial. We’re just gonna have a conversation with him.

Here’s Wu’s insane tweets from earlier, blaming all this on GameGate, and comparing herself, Quinn, and Anita to the “Salem witches.” 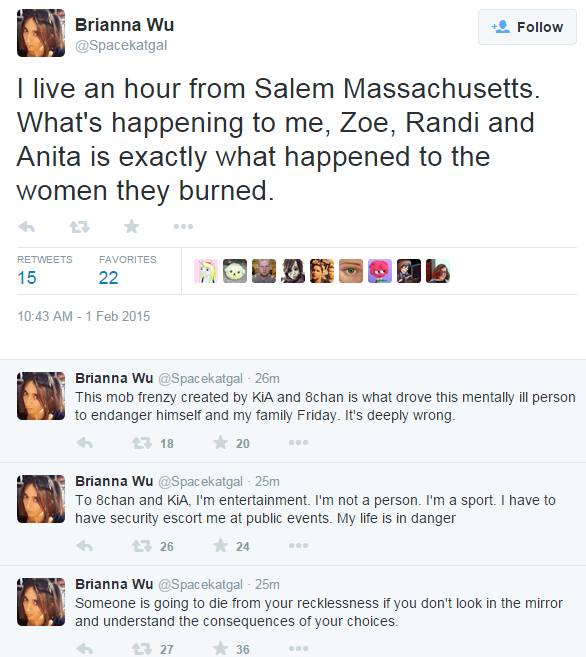 That’s our Brianna, master of subtlety. She crazier than Jace has ever been. If only she would start taking her medications like Mr. Connors. Anyway, I have to go get ready for the show. I will update this post with the video (any commentary on the events of the interview) later tonight.

UPDATE: OK, the interview is over. At this point, I think Jace is just trolling everyone. We have no idea where the gun allegation came from. Wu and the GamerGhazi freaks seem to have pulled it completely out of thin air. The one video of his with the knife was him fucking around after a troll put him up to some shit in an effort to frame him. We don’t know if this was a Ghazi associate, or someone simply doing in for lulz. All in all, he was actually pretty relaxed for most of the interview, and it went a lot better than I thought it would. I’ll post the replay video below once it’s uploaded.

UPDATE 2: Here’s the interview, split into three parts because of tech difficulties: